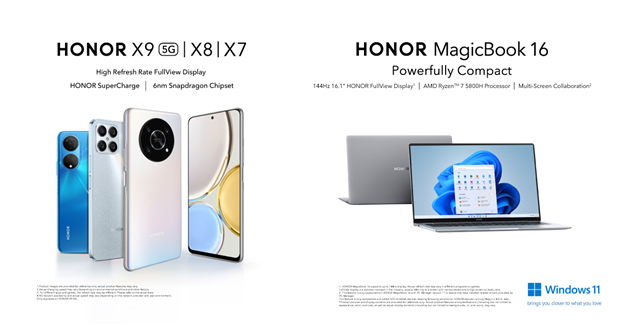 The all-new HONOR X Series runs on Android 11 with Google Mobile Services (GMS), is packaged with a one- year extended warranty and six-month screen crack protection for purchases during the pre-order period. HONOR Malaysia is also giving the one-year extended warranty for redemption till the end of June, further proving HONOR’s confidence in its quality – echoing its “Lagi Tahan Lagi Best” slogan.

The launch yesterday showed HONOR’s confidence on tackling the market with its remarkable HONOR X Series quality, seen with with the HONOR X9 5G falling from one metre high. The HONOR X9 was put to the test and passed tremendously with only a 3.8 per cent ageing rate after three years of usage. The 36-month period has stood the test of time – showing no signs of lagging and assuring users a quality like never before.

With 600 different quality standards covering every aspect from the product design, development, materials, manufacturing and other qualities, HONOR believes its standards are to be parallel with the consumer experience. Users can be further assured by HONOR Lab’s vigorous tests, including test of soft pressure up to 2,000 times, a touchpad test of 800,000 times, and a 24-Hour Continuous Salt Spray Corrosion Test – just to ensure each has passed its production challenge before it reaches customers’ hands.

HONOR does not hold back when it comes to quality, with its technology aesthetics, quality genes and competitiveness specs, HONOR setting the standards high on the release of the HONOR X9, HONOR X8, HONOR X7, and HONOR MagicBook 16 with competitive prices. The ambition train rides further, the recent HONOR Magic4 series launched in MWC 2022 was awarded as one of Android’s Best Flagship Smartphone of the year and taking top sales in China. HONOR Malaysia has confirmed earlier that it will be coming to Malaysia soon.

After a two-year hiatus, HONOR’s beloved model – the X Series finally returns to Malaysian soil. The pursuit of quality is now not a foreign challenge, given HONOR’s adaptability and current strength in cutting-edge technology. The best reward will always be the users, taking the best experience that HONOR is aiming for, for its high quality demand all embedded in the X Series to an almost flagship-level-like smartphone.

HONOR always believes in adopting the “two-wheel approach” to remain consumers-centric. One wheel revolves around understanding the trends and observing feedback of consumers, and the other builds on a vision to lead consumers’ needs while integrating cutting-edge technology.

Pre-order now to grab free gifts worth up to RM1,585

HONOR X9 and HONOR X7 are available for purchase from April 14. Remember to grab them before the end of June to be entitled for a one-year extended warranty.