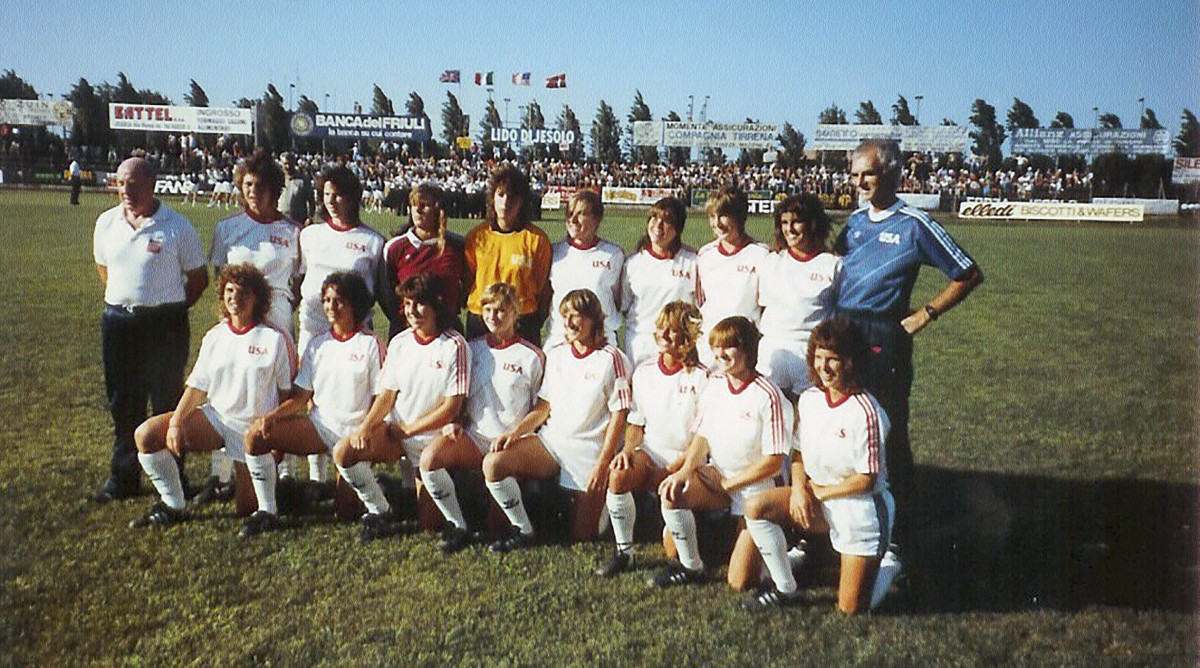 Title IX radically altered the sports landscape, but not all at once and not without resistance. In the early years of the statute, the “forgotten heroes” challenged bias and championed equality—and the impact is still felt today. Read more about Title IX’s pioneers to remember here.

The stewardess—that’s what they were known as then—on the Alitalia 747 flight from Milan to New York approached the women sitting in coach. “The pilot said there’s women’s football players aboard,” she said, “and he wants to meet you.”

“I’m game,” said Kim Wyant, who stood up and took her teammate, Linda Gancitano, with her.

It was late August 1985. There were very few women’s national soccer teams competing around the world. The sport wasn’t part of the Olympics; there was no Women’s World Cup or other major tournaments.

But Gancitano and Wyant ascended the spiral staircase to the plane’s upper cabin as members of the first U.S. women’s national team. As they flew home, the squad’s sweeper and goalkeeper thought of the stories they had to share from the magnificent adventure that had begun in Baton Rouge earlier that month, at the National Sports Festival, an off-year Olympics tune-up event that was the country’s largest gathering of elite amateur athletes. It was there that the two Florida natives and 15 other young women were unknowingly plucked from a pool of 70 top soccer players, competing against each other on teams representing four regions of the country, to be on the squad U.S. soccer officials were hastily assembling. Next, they traveled to Long Island for just three days of practice, and then onward to Jesolo, Italy, to compete in the Mundialito (“Little World Cup”) against Denmark, England and the host nation.

Wyant’s understudy, Ruth Harker, recalls being congratulated by a 17-year-old who’d failed to make the cut. “You f******’ made it, man!” Brandi Chastain told her. Wyant says she had “no idea” of the trans-Atlantic journey that awaited them.

There were plenty more stories: of the expedited passport approvals; the daily $10 stipend for food; the Dublin-bred coach, Mike Ryan, with the thick Irish brogue, who toted a bag of soccer balls onto the plane himself; the oversized men’s kits that simply read “USA” on the back.

The first U.S. women’s national team lost 1–0 to Italy on Aug. 18. Michelle Akers—the team’s tournament standout who would later play on three U.S. World Cup teams—sat that match out with an ankle injury. Next, Team USA played to a 2–2 draw with Denmark. En route to the third match, versus England in Caorle, the bus driver got lost. “We arrived just before kickoff and did not warm up,” Wyant says. “We trailed 3–0 after 15 minutes, and I got yanked at halftime.”

A rematch against Denmark ended in a 1–0 defeat. And yet, the Americans found themselves the crowd favorites. “They were chanting Oosa! Oosa! Oosa!” says defender Stacey Enos. “At first, we thought they were booing us.”

Oosa. U-S-A. It’s the same cheer you hear at USWNT matches today. Six years after that first team’s debut in Italy, the U.S. would win the inaugural Women’s World Cup in 1991, edging Norway 2–1 in a game of 40-minute halves, because FIFA felt women couldn’t handle a full 90 minutes. Following the ’99 World Cup—hosted by the U.S. and won on Chastain’s famous penalty kick—women’s soccer would see an explosion in popularity in this country.

On the flight home, Gancitano and Wyant sat in the cockpit with the captain, sharing cookies and milk and stories of their adventure. “We were disappointed with our record,” says Wyant, who is now at NYU and is the only female coach of an NCAA men’s soccer program. “But like a lot of things in life, it’s the experience we remember most. We were not famous; no one knew we existed.”

As Gancitano and Wyant returned to their seats, the captain made an announcement. Their fellow passengers applauded.