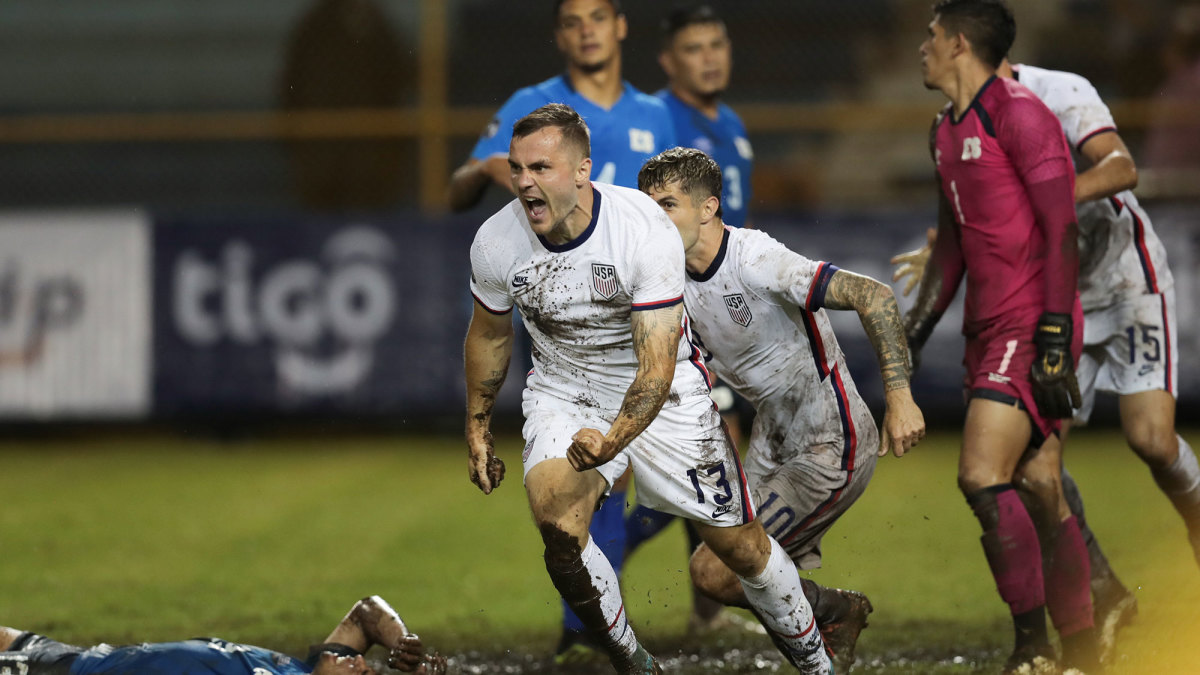 The U.S. men’s national team ended its June international window, and its longest stretch of World Cup preparation, back where it set off on the road to Qatar.

That September night in San Salvador, the U.S. was subjected to a raucous and deafening crowd that filled Central America’s largest stadium (despite pandemic limitations). There were fireworks during play, projectiles, and a motivated and energetic opponent. In short, the youthful visitors experienced a lot of what Concacaf has to offer. They escaped with a point and some valuable first-hand experience.

On Tuesday night, with far lower stakes and amid rain-soaked conditions that somehow were significantly worse, the U.S. had to endure even more to earn yet another draw. Mired on an Estadio Cuscatlán field that looked like it had been the site of a monster truck rally, Lollapalooza, a harvest and a bombardment in the preceding 24 hours, the Americans maintained their composure through setbacks and the slop. They had the better of the play and the better chances. Inevitably, the Concacaf Nations League group-stage match, which ended 1-1, was choppy, antagonistic and physical. Each team saw red.

One wayward American moment nearly spelled defeat, however. Ethan Horvath seemed stuck in the mud as an Alexander Larín shot from a tight angle surprised the U.S. goalkeeper in the first half. The visitors kept plowing through the muck, however, and after Paul Arriola and El Salvador’s Ronald Rodríguez were ejected, two U.S. substitutes combined on the equalizer. Following sustained American pressure, Jordan Morris headed home Luca de la Torre’s long, high cross in the 91st minute.

Morris’s first international goal since his second ACL surgery sparked a team-wide celebration near the Cuscatlán’s southwest corner that U.S. coach Gregg Berhalter had to race over and suppress. Stoppage time remained. The group’s reaction, however, was testament to what Tuesday’s game demanded. Concacaf has a habit of turning the benign into the eventful, and the casual into the contentious. Although there probably was nothing about the match that will echo in Qatar, where the conditions, setting, opponent and style will be so different, the mud-caked Americans’ ability to extract a point from that quagmire said something significant about their maturity and focus. It certainly pleased their manager.

Morris added, “We didn’t make any excuses and we pushed hard together as a team. … Whenever you get a chance to wear the jersey it’s such an honor, and so no matter where you’re playing, no matter the circumstances, you’re going to give it your all.”

The collective consequences of the tie are minimal. Morris’s timely header saved the Americans from their first loss to El Salvador since 1992. Horvath’s misplay, along with a couple outstanding saves by counterpart Mario González, prevented them from winning in Latin America for just the second time under Berhalter. The U.S. (1-0-1 in Nations League) needed a victory to seal a place in the 2023 Gold Cup. It’ll now have to wait until after the World Cup, in March, to do so when it meets El Salvador (1-0-2) and Grenada (0-2-1) again.

Long before that comes summer vacation for the players based in Europe and the mid-season MLS grind for those back in the U.S. There are five months and 180 minutes to go before the World Cup kicks off. Berhalter and his players have two more games—September friendlies in Europe against Asian opposition—to evaluate, gel and prepare.

It was hard to take much from Tuesday beyond awe and appreciation for the effort. Despite the difficulty in establishing passing and possession, and at least two in-game formation changes, the U.S. did enough to win. It held firm after Arriola’s ejection for a high tackle (his suspension won’t apply at the World Cup and is instead enforced when the Nations League resumes) and then forced a red card to El Salvador, which was reduced to 10 men when Yunus Musah was brought down from behind.

“To see the resiliency from this young group, the way they fought, we’re really proud,” Berhalter said. “Although we didn’t get the win, I think it’s a good takeaway and a good end to the June camp, and it really brought the guys together in a good way.”

Musah was barely slowed by the sludge. He somehow put together several strong dribbling runs through the craters of mud and could’ve had a couple goals. A first-half one-timer was well-saved by González, and Musah probably should’ve scored following a one-two with Tim Weah in the 59th minute, only to see González get a touch. Musah also came close on a late free kick.

“I was a little bit hesitant, just thinking about his skill set and how that was going work today,” Berhalter said of Musah. “But you know, he he took advantage of the dribble for sure. Under poor field conditions, sometimes that can slow you down, and he was tremendous today. If there was a man of the match, we’d probably give it to him because of his performance.”

While the Valencia midfielder was immensely impactful, and while Morris will get credit for his intervention, it wasn’t an easy night for several others. Horvath’s 35th-minute misplay was painful. Starting for the national team for the first time in a year and facing an uncertain club future as the backup at promoted Nottingham Forest, Horvath probably needed to make a statement in San Salvador. Larín’s shot was the only one La Selecta put on target, and it was the only goal the U.S. yielded in its four games this month.

Striker Haji Wright earned his first U.S. start after netting a penalty in the window-opening win over Morocco, but he was mostly quiet as the Americans tried to solve for the conditions. Wright shot wide on his best chance, which came off a 31st-minute feed from Christian Pulisic. The U.S. captain was active and energetic as a forward and left winger. While Berhalter also praised de la Torre and center back Aaron Long, who’s now a candidate to replace the injured Miles Robinson, the manager lamented Wright’s failure to make a stronger impression.

“It just wasn’t his night tonight, and you know it doesn’t rule him out for anything in the future. … But it was an unlucky night for him tonight, for sure,” the manager said.

For the group though, it was a memorable way to close out camp. The Americans routed Morocco, 3–0, before drawing South American power Uruguay, 0–0, in a pair of friendlies against teams who will also be going to Qatar. An easy 5–0 rout of Grenada then opened Nations League play. De la Torre, Musah, Long, goalkeeper Matt Turner and striker Jesús Ferreira are among those whose stock likely rose. But with months of club ball ahead and several key players missing from the current squad, there’s still some uncertainty at certain spots on the potential World Cup roster.

“We still have work to do to get World Cup ready and we’re going to use the September window to finalize things,” Berhalter said.

Questions remain about specific individuals and positions. But a muddy 1–1 tie in a secondary regional competition said a lot about the progress of the group.

“The group grows with moments like this,” Berhalter said. “After the game, Jordan Morris walks into the locker room and everyone starts cheering. Everyone’s uniform is a dark brown color. The shoes are a mess. The staff is all dirty. This is what builds teams.”