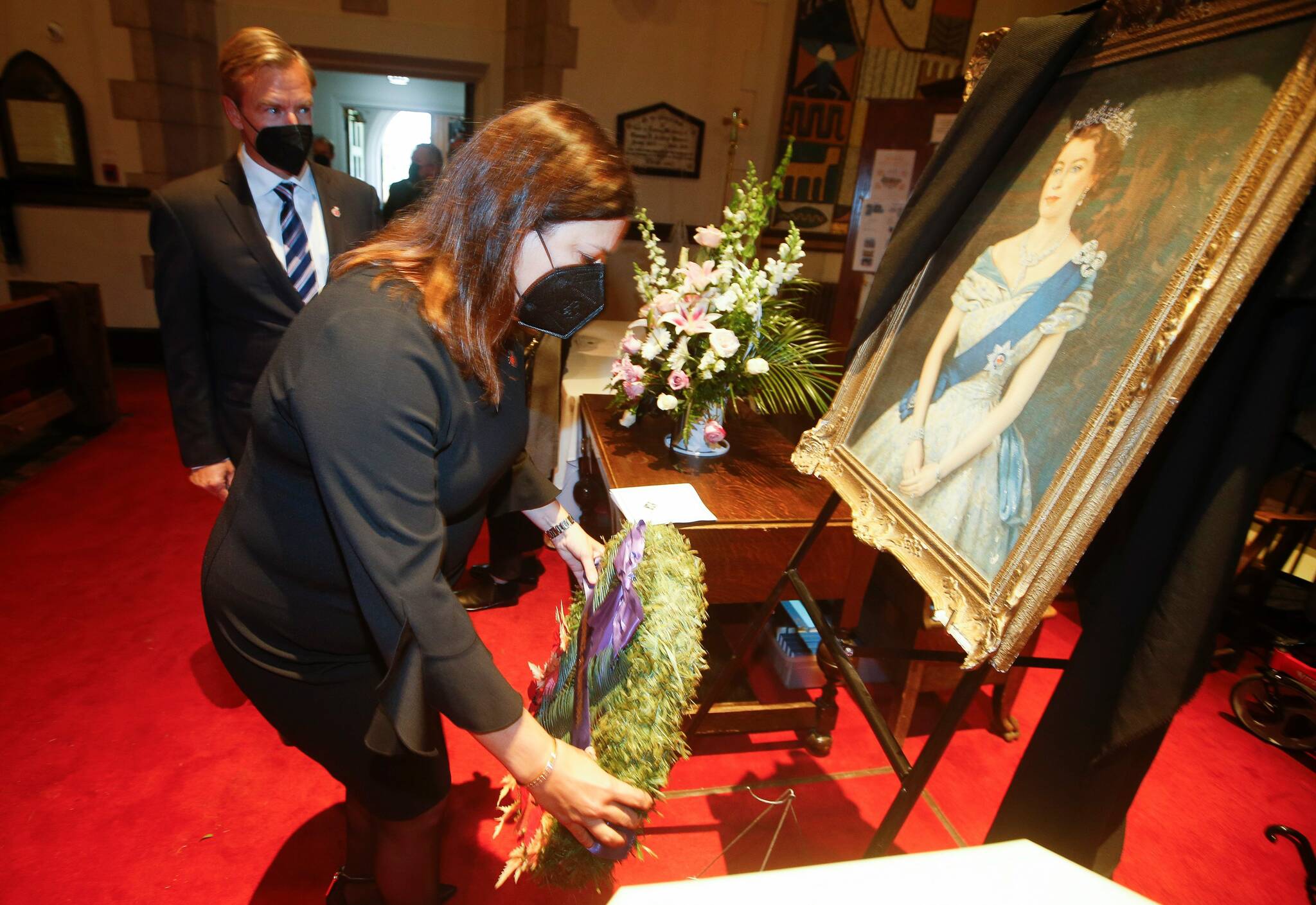 As local mourners gathered to honour the life and legacy of Canada’s longest-serving monarch, Queen Elizabeth watched over them — from the north easternmost stained-glass window of St. John’s Anglican Cathedral.

The parish in Winnipeg’s Luxton neighbourhood was a fitting site for a “service of thanksgiving” for the queen, who was also the supreme governor of the Church of England, on the day of her funeral and burial.

It is believed to be the sole church in Canada with a glass portrait of Elizabeth’s likeness, installed in shards of white, gold and royal blue.

“We’re hoping to honour her late majesty, for her long service not only to Great Britain, but to Canada — and indeed, in many ways, not only the Commonwealth, but to the world,” said Very Rev. Paul Johnson, who set his alarm for 4 a.m. Monday to watch all the proceedings before the royal funeral in the United Kingdom.

“It’s been non-stop all day, but I’m really honoured to be presenting this service for the province.”

Approximately 200 people — many of them self-declared monarchists — gathered at St. John’s to sing hymns and listen to sermons as a tribute to Elizabeth and her 70-year reign. Others tuned into a livestream of the event.

The queen was buried alongside her husband, who died in the spring of 2021, at a chapel in Windsor Castle on Monday. She died on Sept. 8 at age 96.

“I firmly believe that she died of grief. She was still mourning Prince Philip,” said Rene Jamieson, a long-time member of St. John’s parish. “That’s one of the great love stories of our time.”

Jamieson, 85, grew up in Birmingham and moved to Winnipeg as a teenager. Only 11 years younger than the queen, she watched Elizabeth intently throughout her reign. She recalls vividly the day she learned King George VI died: she was walking to her girls’ school from a playground and saw journalists displaying the news on sandwich-board signs.

Among the attendees of Monday’s service were religious leaders of all kinds, government officials, military representatives, Indigenous leaders and congregants.

Many of them took a moment to bow their heads to a painted portrait of the queen, which was on display at the end of the main aisle by a bouquet of flowers, before they took their seats in packed pews. A black ribbon was draped over the top left corner of the frame to signify mourning.

During the service, Lieut. Gov. Janice Filmon spoke about the queen’s iconic legacy as a female leader and the likelihood no one will ever live up to her impressive career. Premier Heather Stefanson later read a passage from the Book of Revelation.

The hour-and-a-half-long event also featured Chief Glenn Hudson of Peguis First Nation; the Indigenous leader provided a synopsis of the treaty relationship with the crown and discussed both the importance of reconciliation and forgiveness.

Cree elder Amanda Wallin arrived in all black, aside from the colourful ribbons on her traditional tunic and skirt.

“There’s so much sadness in my heart because let us remember that this is a mother, a grandmother, an auntie — a human being. When we look back at our Cree law and our teachings, we’re told: ‘I’m a two-legged, you’re a two-legged; we’re on Mother Earth to protect the four-legged. I bleed red, you bleed red, let us treat each other as kin.’” Basically, a family member has passed on,” said Wallin, a long-time United Anglican who is originally from Lynn Lake First Nation.

Wallin said she offered to smudge attendees outside the church before the event to offer prayers and because she felt it was an important physical representation of the fact not all Indigenous people have a complicated relationship with the monarchy.

She acknowledged the harms of colonization, including the residential school system, but indicated she chooses to look to the future because she does not want to carry the pain of the past.

“I pray that King Charles III takes this Commonwealth and sees some of the changes that he can really make for the positive — especially our Indigenous people.”

Maggie Macintosh reports on education for the Winnipeg Free Press. Funding for the Free Press education reporter comes from the Government of Canada through the Local Journalism Initiative.