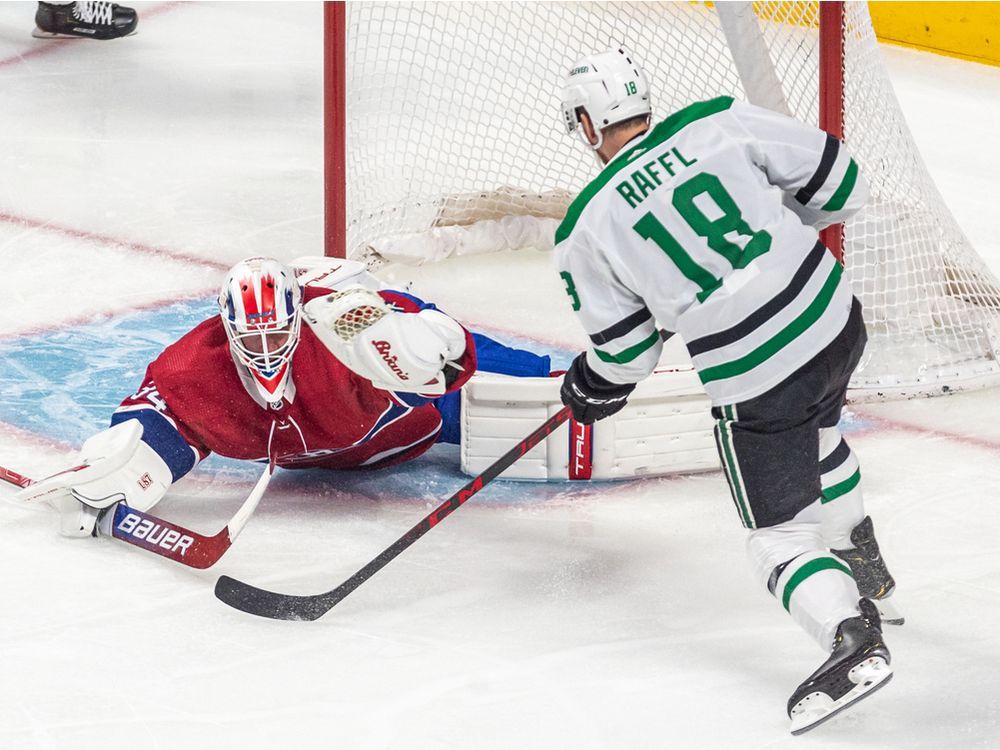 Heart and excitement have become the trademarks of the Canadiens as they work to create some positive memories in a season that was largely forgettable until Martin St. Louis replaced Dominique Ducharme behind the bench.

The Canadiens gave a somewhat less than sellout crowd — there were many no-shows among the announced attendance of 20,714 — a dose of excitement Thursday as they took the Dallas Stars to the wire before losing 4-3 on a disputed goal with 9.7 seconds remaining in overtime.

It took a review by the NHL situation room to confirm the winning goal by John Kilngberg. Tyler Seguin was in the crease and Jake Allen felt he was interfered with, but the folks in Toronto decided that Seguin was chasing a loose puck when his stick became tangled with Allen’s stick.

“I’m not a guy who gets riled up in controversy over what is and what isn’t,” Allen said. “I’ll have to sit down and look at it, but he was behind me in the crease and I wasn’t able to get my blocker square.”

Allen went on to say he wasn’t sure what constitutes goaltender interference and it seems that defining it is a recurring problem in the NHL.

St. Louis said he felt there was interference on the goal and he seemed to have his tongue planted firmly in cheek when he said he had to respect the decision.

Allen was making his first appearance since he suffered a groin injury against the Bruins on Jan. 12.

“That was a difficult time,” Allen said. “I was off the ice for 21 days and we had a practice and a half before that game. COVID hit this team hard, but nobody was to blame. Everyone was having problems.”

Allen said he didn’t rush his return because he wanted to make sure there was no danger of reinjuring his groin and jeopardizing his future. He had to stretch to make a couple of big saves throughout the game and, while he said he wasn’t one to make those type of athletic saves, he didn’t have any problems.

Allen said he was tired and that it wasn’t an ideal situation to come back “on the hottest day of the year.”

Usual suspects Cole Caufield and Nick Suzuki scored goals and the Canadiens took their only lead when rookie defenceman Corey Schueneman scored his first NHL goal. Some of the impact of the moment was missing because it was announced as his second goal.

Schueneman, a 26-year-old who was playing his 12th NHL game, said the slip didn’t matter and added: “If I do have another one, I’ll take it.”

Schueneman said he was looking forward to getting more ice time, a likelihood after the Canadiens traded Ben Chiarot.

The Canadiens’ heart was also on display throughout the night.

Brendan Gallagher was helped to the dressing room after suffering a lower-body injury in the second period, but he returned in the third and was his usual combative self.

Jake Evans put himself in harm’s way twice as he blocked shots while Canadiens were killing a penalty in the final minute of regulation time.

Christian Dvorak played for the first time since he suffered a neck injury on Jan. 24 and he won 11 of his 15 faceoffs and said he had fun in his first game playing under St. Louis’s system.