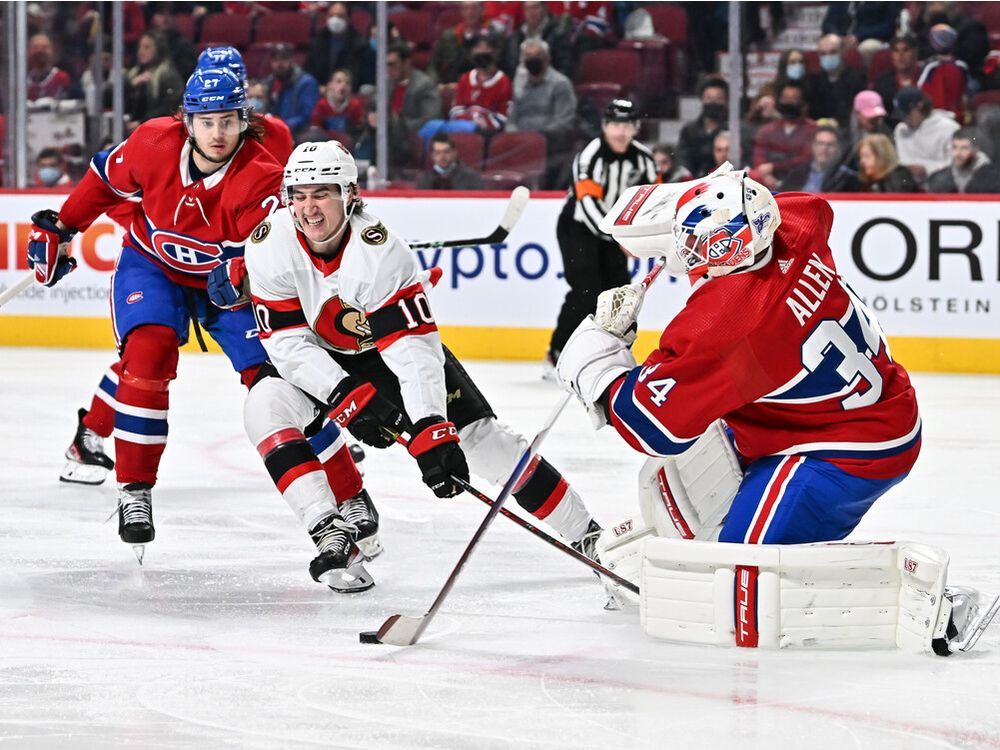 There was swagger to spare at the Bell Centre on Saturday as the Canadiens thrashed the Ottawa Senators 5-1.

It started with goaltender Jake Allen, who put an exclamation point on a 29-save performance by going mano a mano with Brady Tkachuk in the dying moment of the game and plucking the shot out of midair.

On a day when Carey Price made his long-awaited return to practice with his teammates, Allen sent a message there is no reason for Price to rush his comeback.

“The stops Jake made early in the game were huge, he kept us in the game,” Josh Anderson said.

“I know watching from the stands the last game he played was phenomenal,” Anderson added. “Coming in tonight, he made some huge starts right off the bat. We have a lot of confidence in our team right now. I love who how we go into every game expecting to win. It’s a good mindset from everyone.”

The Canadiens’ offence has shown great improvement since interim head coach Martin St. Louis arrived. They went into the game ranked last in the NHL with an average of 2.48 goals a game, but they have scored at least three goals in 14 of their last 15 games.

“We’re playing the right way and feeling good about ourselves,” Anderson said.” Pretty much ever since Marty came in we’ve been paying attention to detail, watching a lot of video and learning a lot. He’s brought a lot of confidence and everyone is playing with that swagger he’s been talking about.”

Anderson said the pace was set by the Canadiens defencemen, who did a good job of moving the puck and pushed the play.

Kulak scored on  a charge to the net, Alexander Romanov played a team-high 23 minutes and 26-year-old rookie Corey Schueneman continued to make his bid for full-time employment in the NHL.

“Obviously, he wants to stay in the NHL and he’s doing a good job of that,” Anderson said of Schueneman. “I don’t know how many blocks he had, but he’s getting in front of everything. He’s been poised with the puck since he got there, making good reads and doing good things with the puck.”

The answer to how many blocks Schueneman had is seven. Schueneman, who scored his first NHL goal Thursday, had another cannon-like shot headed for net on a second-period power play and he picked up an assist when it was deflected in by Armia. He was on the ice for 20:43, the second time in his brief 12-game NHL career he has played more than 20 minutes.

Jonathan Drouin played for the first time since he suffered a wrist injury against the Vegas Knights on Jan. 20 and it was a quiet return. He played with Christian Dvorak and Mike Hoffman and none of the trio managed a shot on goal.

Tkachuk, the Senators’ leading scorer, was held off the scoresheet, but it wasn’t from a lack of trying. He had five shots on goal. The Canadiens blocked four of his shots and two others were off target.

The Canadiens are back in action Monday at the Bell Centre when they play the Boston Bruins in a game sure to please fans, ticket scalpers and bar owners.