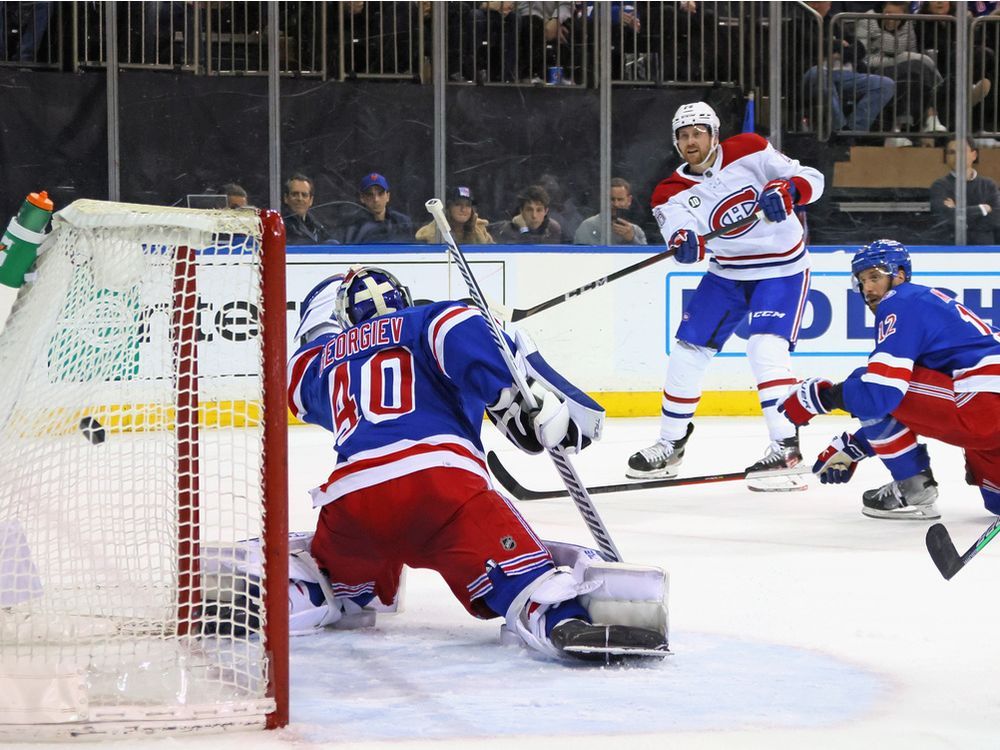 NEW YORK — Jeff Petry scored two goals, including the winner in the final minute of the Canadiens’ 4-3 win over the Rangers Wednesday night and coach Martin St. Louis said he liked the way the veteran defenceman was “sprinting to the finish line.”

“This has been a marathon, so to speak, this season, and he’s sprinting to the finish line in a long race,” St. Louis said. “I like to think he’s got himself in a better mental situation this season and he can carry it into the summer.”

It has been a difficult season for Petry. He got off to the slowest start of his career, but has had a strong finish.

“I think for last how many games, I’ve felt better on the ice, physically, mentally,” Petry said. “I always feel I’m really on my game when I’m skating and moving with the puck instead of standing around and looking for a pass. I’ve been moving and making plays and I think that’s really helped.

“I don’t know the exact time when it switched, but it’s definitely been a long time coming,” Petry added. “I was able to finish the year strong after a tough start. It was good to find my game and build on it and know that coming into next year I know what I can give.”

Petry came under a lot of criticism from fans and the media and it bothered him and his family to the point where he asked to be traded.

“It’s definitely for myself not like I wasn’t showing up at the rink every say and trying to get through it and trying to find my game,” Petry said. “Hearing some of the things that were said were tough for me. For me, it was a question of putting things aside and finding that game I had in the previous three years. I’m glad it’s starting to show up.”

The victory ended a nine-game losing streak for the Canadiens.

“We stopped the bleeding tonight, that’s for sure,” St. Louis said. “It feels good.”

A Montreal loss would have assured the Canadiens of a last-place finish overall in the NHL and given the Canadiens the best odds of winning the draft lottery. It became a moot point when Arizona rallied for a 4-3 overtime win over Dallas Wednesday. That put the Coyotes two points ahead of Montreal. Each team has one game to play, and while Montreal can catch Arizona, the Coyotes have the tiebreaker if they finish tied in points.

But there was no thought of the Canadiens tanking and St. Louis said he’s looking for another win Friday night when the Canadiens close the season with a home game against Florida.

“If we can find a way to play a hard last game, which I think we will (because) we’re playing at home,” St. Louis said, “we can finish on a good note then get away from the game for a bit and hit the reset button for next year. Any time after a year like that you have to hit the reset button.”

The win over the Rangers gave St. Louis a hat trick of wins over the teams he played with in his Hall of Fame career.

“I was joking because we’ve beaten all the teams I played with,” St. Louis said. “We beat Calgary in Calgary, beat Tampa and now the Rangers. I just wish I played on more teams.”