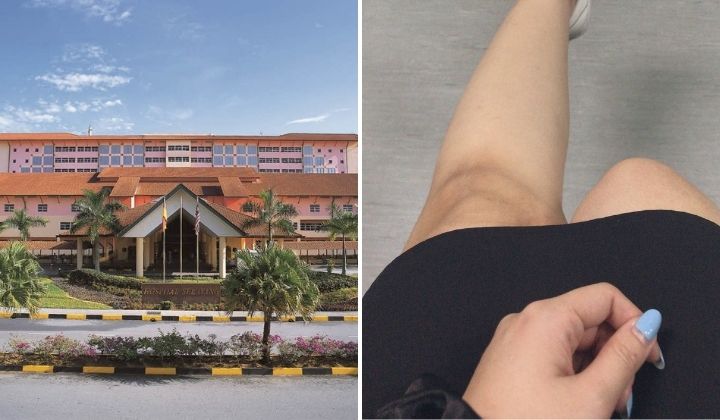 Once again, some people’s obsession with ‘appropriate’ clothing has been implemented without rationale.

A Twitter user Eliza (@elizanathaniel) was denied entry to see her father in the Selayang Hospital emergency ward because the security guard deemed her attire inappropriate.

Amoi! Why did you wear so short? Quickly la, amoi!

Eliza said she wore a black shift shapeless dress with sleeves that stopped just above the knee and said she didn’t think of what she wore because it was an emergency situation.

I have been denied entry to see my dad in the Emergency Ward, not cause of Covid, noooo friends, not cause its not allowed (cause one person is allowed at a time) but BECAUSE I WAS DEEMED DRESSED INAPPROPRIATE. I wore a shift shapeless with sleeves AND JUST ABOVE THE KNEE…. pic.twitter.com/MIwRyWJvJ1

She claimed that there were other visitors who wore shorter shorts than her but they weren’t stopped.

Eliza asked what if it was the last time she could see her father and she was denied just because someone else didn’t agree with what she wore.

Netizens believe that a lot of staff in public service followed the rules blindly without using critical thinking skills.

A netizen pointed out how ridiculous the rules for appropriate clothing were. They shared that they once wore shorts for a wound dressing appointment but was told to cover up more next time.

Still, it’s a wonder why the hospital staff behaved like the religious police.

The All Womens’ Action Society (AWAM) criticised dress policing and said it was a violation of basic healthcare access.

AWAM added that the Health director-general Dr Noor Hisham Abdullah has clarified in 2015 that dress codes were just guidelines.

How ‘shift shapeless w/ sleeves & just above the knees’ isn’t “decently dressed” is beyond comprehension. Plus, @DGHisham clarified in 2015 that🏥dress codes are just guidelines. This dress policing is unnecessary & a violation of basic right to healthcare facility access https://t.co/UntnCJkdU0

Action had been taken

In response to the incident, Dr Noor Hisham said the hospital security personnel has been reprimanded.

The security personnel was also told to practice “appropriate communication” when dealing with patients and their next-of-kin.

Eliza said she was told that action has already been taken and tweeted that she would no longer tweet about it because the matter has been resolved.

She indicated that she might remove the Twitter thread soon, as kindly requested by the Health Ministry (KKM).

I’m not here to cause a scene but for the right rules & policies to be taken for us to not face the lack of empathy especially in an ER. It’s a shame really because the staff and doctors were 100% wonderful and true hero’s but the total experience ruined by a few bad apples who represented the security of the hospital took it too far. But we SEE YOU AND WE WILL VOICE IT.