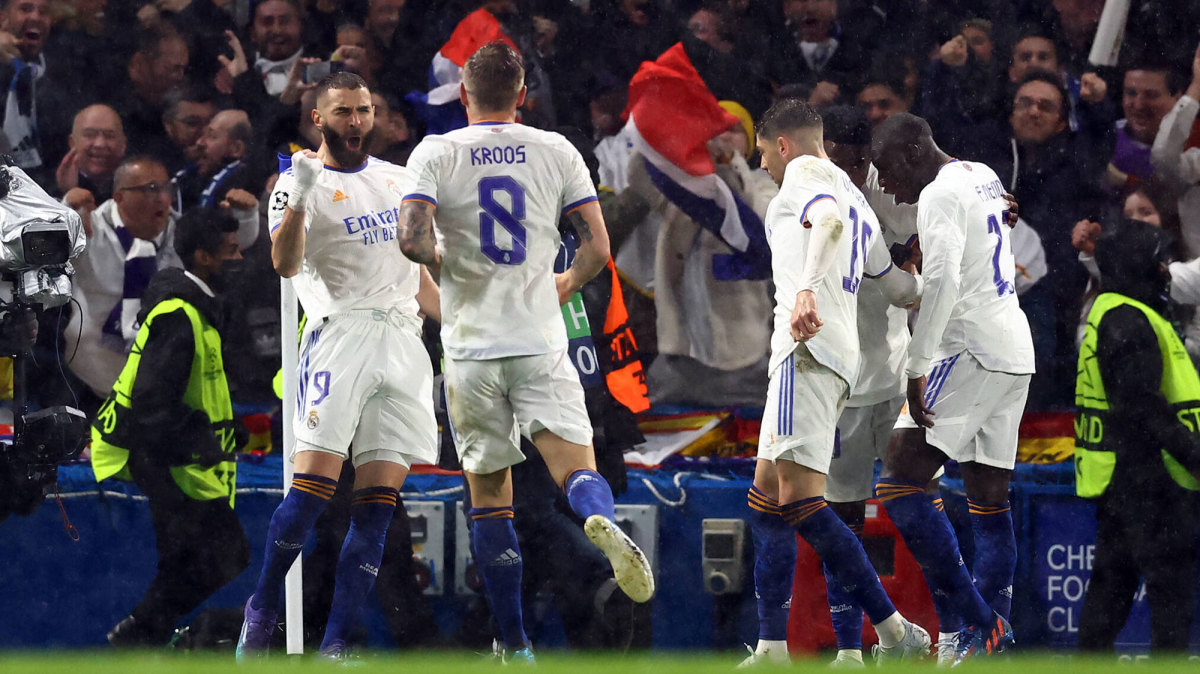 Roman Abramovich, the story had it, decided to buy a Premier League football club after watching Brazilian great Ronaldo score a hat trick for Real Madrid in the Champions League at Old Trafford in 2003. If that was the start of his involvement in football, it’s perhaps fitting that another brilliant hat trick by a Madrid player on an English ground should bring the curtain down on the Abramovich era. This time it was Karim Benzema, and, while Chelsea will argue, quite rightly, that Wednesday’s 3–1 home defeat in the first leg of the quarterfinals does not mean it is out of this season’s Champions League, the France international’s hat trick was every bit as good as Ronaldo’s.

As talks about the ownership go on and the Raine Group works through the shortlist to decide which bid will be successful, it’s hardly surprising if players have begun to become a little distracted. Everything for now is on hold and, while adversity can bond players, there can come a point at which it is simply wearying. And as the end of the season draws near, players, understandably, begin to wonder about their own futures.

Perhaps that’s reading too much into a couple of poor results—and this was a far better performance than Saturday’s 4–1 defeat to Brentford—but if the uncertainty is not the reason for Chelsea’s sudden laxity, what is? Chelsea’s more familiar failing is sterility, but that was not the problem here. Indeed, on another night, it may have scored three or four itself. The issue was that it was sliced apart, again and again.

Benzema picked up where he had left off against Paris Saint-Germain in the last 16. He had scored three in the last half hour there, and followed with three in the first 46 minutes Wednesday. In all competitions, he has scored 12 goals in his last seven games. Benzema may be 34, but he is in the form of his life.

But superb as he was, there was also a sense of Chelsea picking up where it had left off against Brentford. It conceded four in the second half then, in part because of a curious diffidence, but also because of its opponents repeatedly scoring sensational goals. Benzema had already produced a clever back-heel that laid in Vinicius Junior to smack a shot against the bar as Andreas Christensen slipped when he met a cross from the Brazilian with a perfectly guided, long-range header. That was 1-0 after 21 minutes, and three minutes later he converted a Luka Modrić cross with a clever looped header back across goal.

He probably should have completed his hat trick before halftime, but dragged his shot wide. By then, Chelsea had gotten back into the game, with Kai Havertz heading in a Jorginho cross. But Benzema did complete his hat trick—the first ever scored against Chelsea in the Champions League, making him only the fourth player to score hat tricks in back-to-back Champions League games. In the first minute of the second half, he pounced on Édouard Mendy’s under-hit pass to brush off a strangely unemphatic challenge from Antonio Rüdiger before rolling the ball into the empty net.

This was far from the timid Madrid that had lost 1–0 away to PSG, or even the side that had struggled in the first hour of the second leg of that tie. Chelsea had controlled the game at Stamford Bridge in the second leg of the semifinal against Madrid last season, but this was a much more ragged game. Chelsea, usually so compact, was unusually open in midfield and Vinicius repeatedly pulled wide into the space behind Reece James, into areas where Christensen was reluctant to follow. Federico Valverde, meanwhile, was excellent on the other flank.

The question after Chelsea’s defeat to Brentford was whether that was a blip like the 5–2 home defeat to West Brom last season (which was followed by a 2–0 win in Porto), or whether it might indicate something more profound, a reaction to the uncertainty around the ownership of the club. It may be that the new owners turn out to be as willing to pump money into the club as Abramovich was, or can find a way of generating additional revenue, but equally they may not, as few are. There is a possibility that this will come to be seen as the night on which Chelsea ceased to be a major European force.

And, so long as Madrid holds on in the second leg, it will surely be seen as one of the best nights in Benzema’s career.