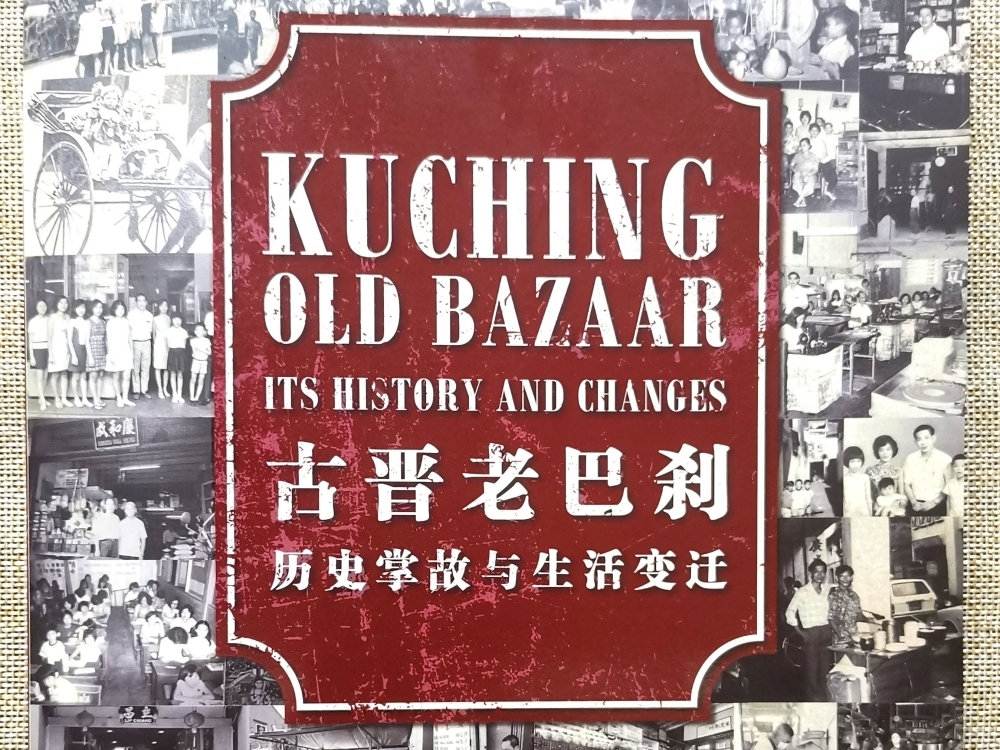 The front cover of the book ‘Kuching Old Bazaar – Its History and Changes’.

I HAD a very pleasant surprise when I walked into the famous Carpenter Street ‘kopitiam’, Juat Siang, owned by the chairman and Chinese Kapitan of the Kuching Old Bazaar area, Lim Chuan Chan – more popularly known as ‘Ah Cheng’.

I was there to buy some takeaway food – he is famous for his son’s Ah Chai’s fast-food (best Chinese-style chicken curry and very delicious choices of 10 other varieties of meats, vegetables and seafood) and his wife’s beef noodle, ‘kuih chap’ and ‘kolo mee’.

It’s a truly single family operation and one of the street’s oldest as well.

Kapitan Ah Cheng had proudly presented me a copy of the book ‘Kuching Old Bazaar – Its History and Changes’ –a 130- page tome fully illustrated with beautiful black-and-white photos of the region of downtown historical Kuching in two languages, English and Mandarin.

It has been on sale since its launch on Feb 15, 2021, and is now in its second edition. It costs RM38 per copy and can be sourced at Star Bookstore, Main Bazaar.

The book holds a wealth of information, statistics, historical anecdotes (serious, light-hearted, ghost stories and even scandals and other juicy bits) bursting at its beams with amazing photos and little known facts and revelations – it’s a real treasure trove for all those interested to know more about the history of Kuching, specifically the Chinese and geographically around the populous ‘lau pa sat’ area (given city status since Aug 1, 1988).

If you or any member of your family has any connection to this wider region of the specific areas where the boundaries surround and include Main Bazaar, Wayang Street, Courthouse Road, Carpenter Street, China Street and Upper China Street, Bishopsgate Street, Ewe Hai Street, Temple Street, Green Hill, MacDougall Road and Ban Hock Road, you’d be considered as a member of Kuching’s Old Bazaar community.

If you browse through the book and look through all the photographs, the earliest of which was dated in the 1820s and the latest taken in 2020 of the publisher, writers and editors.

A map of the entire Kuching Old Bazaar and a timeline from the 1820s till the present day are beautifully illustrated as you open up the book. Its contents show eight chapters titled ‘Historical Sketches’ and 11 more chapters entitled ‘Life Changes’.

The story of the old bazaar started with the arrival of a Cantonese pioneering immigrant by the name of Lau Chek who, together with about 20 others, were the first Chinese to settle down in Old Kuching in the early 1820s – this was duly noted when British explorer James Brooke had first set foot here in 1839.

Over the next few pages are historical anecdotes of the early dwellers and migrants who had first started Kuching on its way to become a major trading post on the entire island of Borneo.

The next part of the book is titled ‘Streets and Places’ – with its interesting old stories, modern-day photos show all the major streets and lanes and roads that are part of the wider Kuching Old Bazaar.

This is followed by ‘Temples, Associations, Commerce and Schools and Trade Activities’. I found the section of ‘Heritage Buildings’ extremely interesting, and I am sure that my friends at the Sarawak Heritage Society (Attention: James Yong and Donna Yong!) would find this most informative.

On a more personal basis, my favourite two chapters dwelled on ‘Pioneers of Kuching Old Bazaar’ and ‘The Anglican Mission in Kuching’, both of which I must admit, are my vested interest.

Three of the famous ‘Old Pioneers’ were related to me and were my ancestors: one, Ong Ewe Hai, great-great-grandfather, had a street named after him (Ewe Hai Street) within the vicinity; another Ong Tiang Swee, great-grandfather had a road named after him at Mile 2 ½ Kuching Airport Road, as well as a school; the third, Datuk Wee Kheng Chiang, founder of United Overseas Bank (UOB) and Bian Chiang Bank (the fore-bearer of RHB) was married to my grand-aunt Ong Siew Eng, the eldest sister of my grandfather Ong Kwan Hin.

The writers/publisher had actually missed out on two other Ongs – my uncle the late Tan Sri Ong Kee Hui, who had for a time worked at Bian Chiang Bank, which had its banking offices at Main Bazaar; also grandfather Ong Kwan Hin whose business office Hiap Soon Hin was the first local sole agent for the Great Eastern Life Insurance, at 59, Main Bazaar in Kuching, till he had given it up in the 1970s.

Obviously, the chapter on ‘The Anglican Mission’ is close to my heart: I was born again as an Anglican in 1988; I had also schooled at the premier Anglican Mission school situated in the area – St Thomas’ at MacDougall Road for 13 years (1956-1969). I am proud to have been appointed as chairman of the board of the schools’ management since 2020. The Right Reverend Bishop Datuk Danald Jute is our president of the board.

Back to the book, many stories are included – for instance, did you know that there was a boom in the number of tailor shops in Kuching (most of them were Hakka and Cantonese) in 1965, which was created by the demand among youngsters for the trendy dressing styles of the ‘a go go’ craze, and the onslaught of the Beatles – with pantsuits, miniskirts and beehive-styled hairdos? Suddenly about 20 new Western-style tailors sprouted up in Main Bazaar alone ( and hair salons too), and there was a huge demand for dressmaking classes; every girl, it seemed then, had wanted to learn how to sew during those years! Nowadays, they’re all busy on Tik Tok!

One of my favourite sections dwelled on The Old Bazaar’s Famous Food! This being the birthplace of the world-famous Sarawak (or rather Kuching) ‘laksa’; the earliest purveyor of this delicious broth-based dish was a Teochew by the name of Goh Lip Teck who had, in the 1940s, peddled around the streets of the Old Bazaar (‘Lau Passat’, as known in Hokkien) until he set up shop in the 1950s at Min Heng Coffeeshop, just a few foot-falls away from the General Post Office. Unfortunately, the shop closed down in the early 2000s; today one of Goh Lip Teck’s sons still produces the original laksa paste for sale as a home-based business.

My other favourites in this area includes the famous ‘Lau Ya Keng’ (Old Opera Stage) with its absolutely authentic ‘kolo mee, its pork porridge (late nights to early mornings only), glass vermicelli fish balls and ‘yong tofu’ and pork satay stalls, ‘kuih chap’ (nights only) and one of the better coffees in town.

At night during the timber boom days of the 1970s-1980s, after midnight you’d see scores of rich pundits with their Taiwanese singer-dates having late (or early morning) supper at the evening ‘Fry & Cook’ stall at Lau Ya Keng, where a meal of four dishes for four persons could set you back by several hundreds!

Kuching’s oldest restaurants Ann Lee and Chia Heng used to be situated here – only Ann Lee is still around, a shadow of its former glorious days.

My own personal fondness for ‘Lau Passat’ were cultivated since my boyhood years: I had frequented my favourite bookstores of Chiang Wah Onn, Mayfair, Mong Soon. My boyhood dentist at Chai Dental was there too, and so was my night Maths tuition class of Mr Poh Sze Juak.

My all-time favourite eating places – the evergreen ‘The Junk’, owned by George and Roselyn Ling; the fine-dining ZINC (co-proprietors James Lo and Savant) are both sited here. My old favourite supermarket Ting & Ting had, alas, closed down a few years back.

In 2001, the formidable working team of Datuk Lily Yong and Dr Abdul Rahman had started the first ‘Kuching Intercultural Mooncake Festival’, which was held on an annual basis for a period of one week at the Old Bazaar area, culminating in the actual night of the festival, the 15th day of the eighth lunar calendar. Together with a pioneering event management team headed by Dato Goh Leng Chua, we had organised the events for the first two years in coordination with the then-Kapitan Cina Ko Wai Neng of Wai Hing at China Street. The festival will celebrate its 21st year this August – and hopefully, would be revived after a two-year lapse.

To conclude, I must applaud the wonderful work put in by the publisher, authors and editors of the book – they are Chai Yu, Helen Ten Yien Hsia, Tay Yit Ping (authors), Mike Yong Hua Lee, Chen Li Sze (editors) and publisher, the Kuching Old Market Community Association under its chairman Kapitan Ah Cheng.

Bravo on achieving such a great historical piece of work!