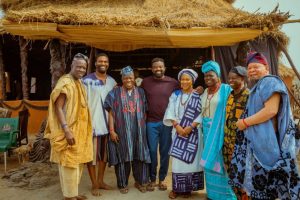 “Something Huge is about to drop!!!

It has only been a few days since everyone screamed “happy new year” in excitement, but at KAP Hub, we were more excited about this year because of all the plans we had, and guess what guys? Right now, those plans are already panning out…

It’d be remembered that the talented Director wrapped up 2021 with a Netflix original titled “A Naija Christmas” that knocked the Christmas socks off our feet. 2022 is here now, and he is working on another movie which is the second of the Netflix three films slate and best believe you need to stay guarded because this one will be one for the books.