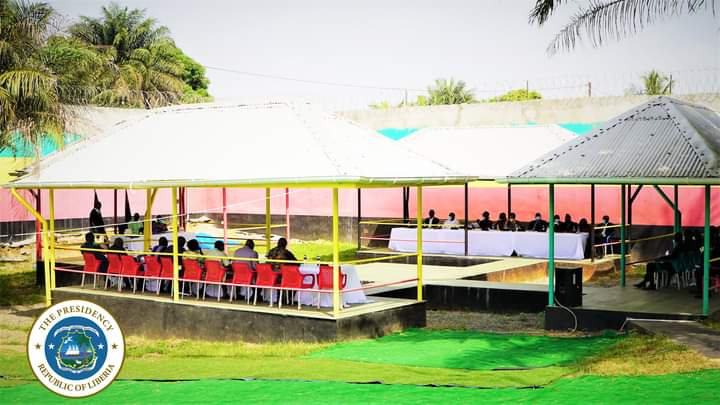 The President of Liberia George Weah has raised concerns over what he described as the growing security challenges facing West Africa.

Mr Weah made the worrying observation on Wednesday, February 2, 2022 when he held his first major Cabinet Meeting for the new calendar year, focusing on several critical national Issues. There has been coups in Burkina Faso, Mali and Guinea in less than two years. On Tuesday, February 2, 2022, there was a reported attempted coup d’état in Guinea-Bissau.

The Liberian Leader said the meeting was necessary to take stock of the performance of his officials in the preceding year, while planning for the year ahead.

He said although considerable progress has been made, there are “areas of concern” that need to be tackled.

The President used the occasion to also address the growing security challenges confronting the West African Subregion, noting that the leaders are consulting on best measures to curb the menacing wave of undemocratic change of power.

He announced that an extraordinary Summit of the Authority of Heads of State and Government ECOWAS is to convene in the Accra, Ghana on Thursday, February 3, 2022.

The cabinet discussed and made decisions on several critical issues, including the upcoming National Launch of the Bicentennial on February 14, 2022, the condition national prisons of the country, the At Risk-Youth, (commonly known as Zogos), Employment Program by the Ministry of Youth and Sports Ministry, as well as the situation of some Liberian Girls in the Gulf State of Oman, among others.

The cabinet endorsed, with immediate effect, the Ministry of Youth and Sports One UN System At-Risk Youth Employment Program that is principally aimed at the rehabilitation of less fortunate youths of the country. The AR- YEP Program targets about 40-thousands of such Youths found in ghettos, cemeteries, abandoned buildings, street corners, etc.

On the Bicentennial, the Cabinet welcomed the Plan of Action for its successful National Launch on Monday, February 14, 2022, and mandated that all government employees participate in the events surrounding the launch. Ministries, Agencies and Commissions are urged to help with the implemtation.

With regards to the national Prison Conditions, the Cabinet endorsed the recommendation for the erection of a new Prison Facility for the Monrovia Central Prison, which no longer has capacity to host more prisoners. The Ministry of Justice and stakeholders are to explore avenues for possible funding for the construction of a new prison facility.

Regarding the current situation of some Liberia Girls living in the Gulf State of Oman, the Cabinet called for continued engagements with the Oman government and relevant International Actors for the expeditious return of the girls.

Meanwhile, President Weah has expressed concern about the exodus of Liberian youth to Cyprus under the guise of honoring scholarship offers in that country. He told the cabinet that credible information available to him is that most of these young people are being duped and struggling get daily needs.

He has mandated the Ministries of Education, Labour, and justice to investigate the situation and devise mechanisms to curtail this worrisome situation.