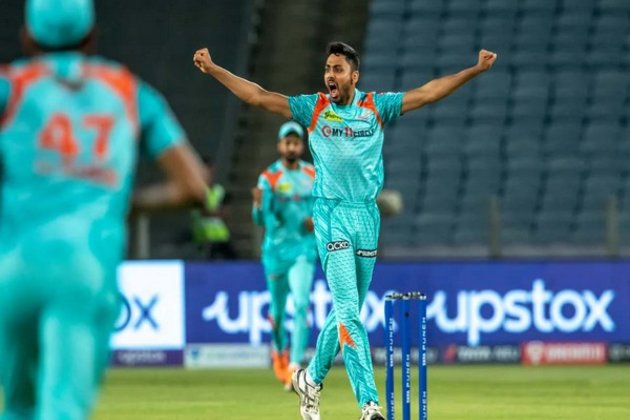 It was not a very memorable day for GT batters, as they were not allowed to have partnerships lengthy enough to power the side to a big total as LSG bowlers kept taking wickets at regular intervals.

Opting to bat first, Gujarat Titans got off a poor start as the side struggled against the pace trio of Dushyantha Chameera, Mohsin Khan and Avesh Khan. The first, one to depart was Wriddhiman Saha, who tried to hit the ball to the leg side, but it hit the top half of his bat and Avesh Khan standing at mid-on delivered his assistance to the bowler Mohsin Khan.

This brought Aussie Matthew Wade to the field, making his return to the side. The batter looked good, smashing Chameera for two consecutive fours. However, he was dismissed by Avesh Khan in the fifth over after being caught behind by the keeper Quinton De Kock for 10 off 7.

This brought captain Hardik Pandya to the crease and the onus was on him to build a strong partnership with compatriot Shubman Gill, who was looking really good at the other end.

Gill and Pandya resumed rebuilding efforts for GT, but it could last for only 27 runs as Avesh Khan sent back Pandya to the pavilion for 11 off 13 when the team’s score was 51, with the keeper De Kock catching the ball once again.

GT stepped into the second half of their innings with only Gill offering some resistance to LSG’s powerful pace attack, hoping to turn things in their favour with Miller, who had been a match-winner for the side on some occasions, by his side. The duo carried on the innings with consistent strike rotation, with some occasional hits crossing the boundary line. But the run-making pace had been sacrificed as by the time 15 overs ended, the team stood at 92/3 with Gill (47) and Miller (18).

Miller’s six at the third ball of the 16th over bowled by Holder helped GT touch the 100-run mark. The pair had achieved a 50-run stand by the next ball, coming in 39 balls. In the final ball of the over, the 52-run stand between the duo was finally broken by Holder, as Miller was caught by Ayush Badoni at deep third man for 26 off 24 while attempting to go big.

Rahul Tewatia arrived at the crease next. Soon, Gill achieved his fourth half-century of the season, which came in 42 balls with five great boundaries. Gill continued to look good even after his fifty, putting his efforts into the next gear with two consecutive fours off Chameera in the 17th over. Tewatia also continued rotating the strike from the other end to give more of it to the in-form batter.

Just when it seemed that Gill and Tewatia would start piling runs in death overs, thanks to the 16th over by Holder and 17th by Chameera that went for 11 and 14 runs respectively, Mohsin Khan and Avesh Khan put pressure back on GT with cheap 18th and 19th overs, going for only five and six runs respectively.

Avesh Khan was the pick of the bowlers for LSG, picking up 2 for 26 in four overs. Mohsin Khan also picked up 1/18 in four. Holder also got a wicket.