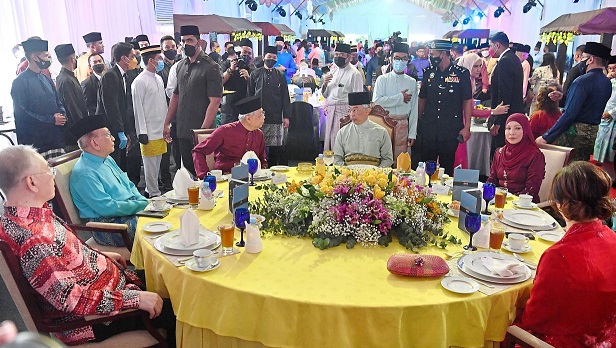 Overwhelming crowds at Raya do

PUTRAJAYA: The Hari Raya open house at Seri Perdana, featuring a village concept, was so well attended that it was extended by two hours after its 4pm closing time.

An estimated 100,000 people turned up for the event hosted by Datuk Seri Ismail Sabri Yaakob and the Cabinet ministers at the Prime Minister’s official residence.

The attendees began arriving as early as 7.30am although the gates to Seri Perdana were due to open only at 10am.

Royal guest: Sultan Abdullah chatting with Ismail Sabri as Dr Wee (left) and other VIPs look on during the Hari Raya open house at Seri Perdana.

Due to the overwhelming response, Ismail Sabri extended the event until 6pm.

Shouts of “Daulat Tuanku” erupted spontaneously from the crowd.

‘’I saw people arriving by 8am. They came from places such as Johor, Kelantan and Melaka.

‘’The Malaysian Family (Keluarga Malaysia) spirit is truly reflected in this open house,’’ he said.

He said he was touched by Malaysians who made it a point to show up and extend their good wishes to one another after two years of battling the Covid-19 pandemic.

Dr Wee, who was accompanied by his wife Datin Seri Jessica Lim Hai Ean, said the celebration was a reflection of the unity among Malaysians despite their cultural differences.

This was indeed a reflection of Malaysia’s uniqueness, diversity and its strength as a nation, he said.

“It is a national treasure that we can showcase to the world,” he added.

Barisan Nasional chairman and Umno president Datuk Seri Dr Ahmad Zahid Hamidi said it was the right move to hold the open house yesterday instead of the first day of the celebration.

“This is because the people needed to balik kampung on the first day of Raya,” he said.

Health Minister Khairy Jamaluddin said he was happy that Malaysians were able to celebrate Hari Raya in a way that was not possible over the past two years due to Covid-19 restrictions.

“We have taken our country to the transition period successfully and this is the success of the Malaysian Family (Keluarga Malaysia) and our country,” he said.

He spoke about Malaysians having to still be cautious as the virus is ever present.

“We do not want the festive season to bring any harm to public health,” he said.

Large tents were set up at the Seri Perdana compound for the guests who were feted to traditional village-style dishes such as chicken rendang, satay and curry laksa.

There was also “rojak Bera”, a favourite of Ismail Sabri who is Bera MP.

One of those who attended the event was 17-year-old Mohd Islam Yaquin, who is one of a set of triplets. He turned up with his two siblings.

He said he was happy to be part of a grand occasion and to be able to shake hands with the Prime Minister.

“It feels good to come here,” he said while tucking into kambing golek (roast lamb).

Retiree Mohd Taufiq Sulaiman, 70, said he drove from his home in Sentul to attend the open house after missing it the last two years due to Covid-19 restrictions.

“It feels good to be here and to celebrate together as a Malaysian Family,” he added.

(The last open house at Seri Perdana was held on June 5, 2019, which was hosted by then prime minister Tun Dr Mahathir Mohamad and the Cabinet members.)

Also impressed by the event was Canadian travel vlogger Steve Greig, 31, who arrived in Malaysia two weeks ago to experience the open house festivities.

“I visited Malaysia in early 2020 and ended up stuck here for almost the entire year due to the pandemic.”

But that did not deter him from visiting Malaysia again.

He said that he wanted to experience Hari Raya open houses as “many of the friends I made while I was here told me that I should do so”.

Greig said he was impressed at how well the event was organised despite the massive turnout.

Iraqi Abdullah Abbas Omar, 24, a graduate student at Universiti Putra Malaysia, said: “I was told by a doctor at UPM about the open house. I am so happy that I came as I got the chance to shake hands with the Prime Minister.

“It is impossible for us to meet with our leaders in my country, let alone get the chance to shake their hands,” he added.

Abdullah said he was amazed at the graciousness of the people who were at the event despite having to wait in line to meet the VIPs.