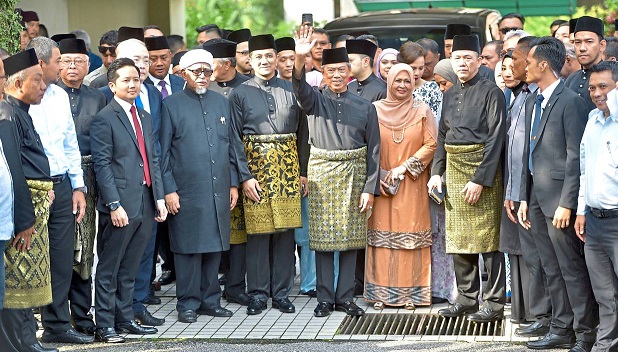 The Sheraton Move coup that led to Pakatan Harapan’s early and highly unexpected end as the government was not something Yeo Bee Yin saw coming.

In her upcoming book ‘Unfinished Business’ she revealed that it was “beyond her wildest dreams” that Gombak MP and then PKR deputy president Azmin Ali would “cross to the other side”.

“As much as I have heard the rumours since the end of 2019 about this ‘backdoor’ operation, I still believe that Azmin had his moral limits.

“After all, Azmin was the Selangor menteri besar when I was serving in the Selangor state assembly. While I didn’t agree with him on everything, it was beyond my wildest dreams that he would cross over to the other side after having been in the Reformasi movement for over 20 years. He had stood with Anwar and PKR through the darkest times.

“It was also unfathomable to think that Saifuddin Abdullah would cross over. He was the supposed gentleman who called me ‘sis’ every time he saw me and sat beside me in every cabinet meeting.

“Only when I saw their faces at the Sheraton Hotel, hugging and kissing with PAS and Umno leaders, did I finally realise that we (Harapan) had been betrayed,” she wrote.

The Sheraton Move in February 2020, which ended Harapan’s 22-month stint in Putrajaya, refers to a weeklong political impasse triggered by an alliance between Umno, PAS, and Bersatu.

It was triggered at the Sheraton Hotel when the three former political adversaries, alongside GPS and Warisan, formed a union to safeguard the interests of race and religion in the form of a new coalition dubbed “Perikatan Nasional”.

In her book, Yeo penned her reflections on her brief stint in government as energy, science, technology, environment and climate change minister, wondering if the collapse of the Harapan-led government could have been prevented had they built better relationships with the then-opposition.

“What if we had spent more time managing our fragile coalition politics and building more bridges with the leaders of other parties instead of focusing entirely on running the ministry?

“If we had managed our differences more amicably, perhaps we wouldn’t have split up? After all, political power comes from politics, and unfortunately, politics in Malaysia is a lot about relationships and much less about policies.

“The Sheraton Move made me realise that no matter how hard we work as ministers, eventually, the power would go to those who win politically,” she wrote.

Yeo recounted the day she was offered her ministerial post, maintaining that it was something that did not cross her mind despite her name floating in a rumoured “cabinet list” as a potential candidate.

A few months after the 14th general election, Yeo received a call from then prime minister Dr Mahathir Mohamad himself with an offer for the position.

Yeo accepted the offer on the spot; however, she feared that it would cause an internal backlash within DAP due to her lack of seniority.

“Two things were running through my mind. First, I assumed the appointment was for the role of a deputy minister – being appointed as minister was just too far-fetched.

“Second, I would still seek advice from my party leaders and was willing to decline the role if they objected. So I said ‘yes’ and accepted the offer,” she wrote.

Yeo said she was prepared to let go of the appointment upon request by the party leadership. However, that request never came.

Despite all the setbacks faced by the Harapan coalition, Yeo said that there was still hope for the nation as long as it kept moving forward.

“My short 10 years in politics taught me this – as long as we keep moving forward, good things will happen. We must not allow what is happening in politics today to limit our imagination as to what the country can become in the future.

“Let us believe that our nation can be better as long as we keep moving forward. The fight for a better Malaysia is not over,” she wrote.