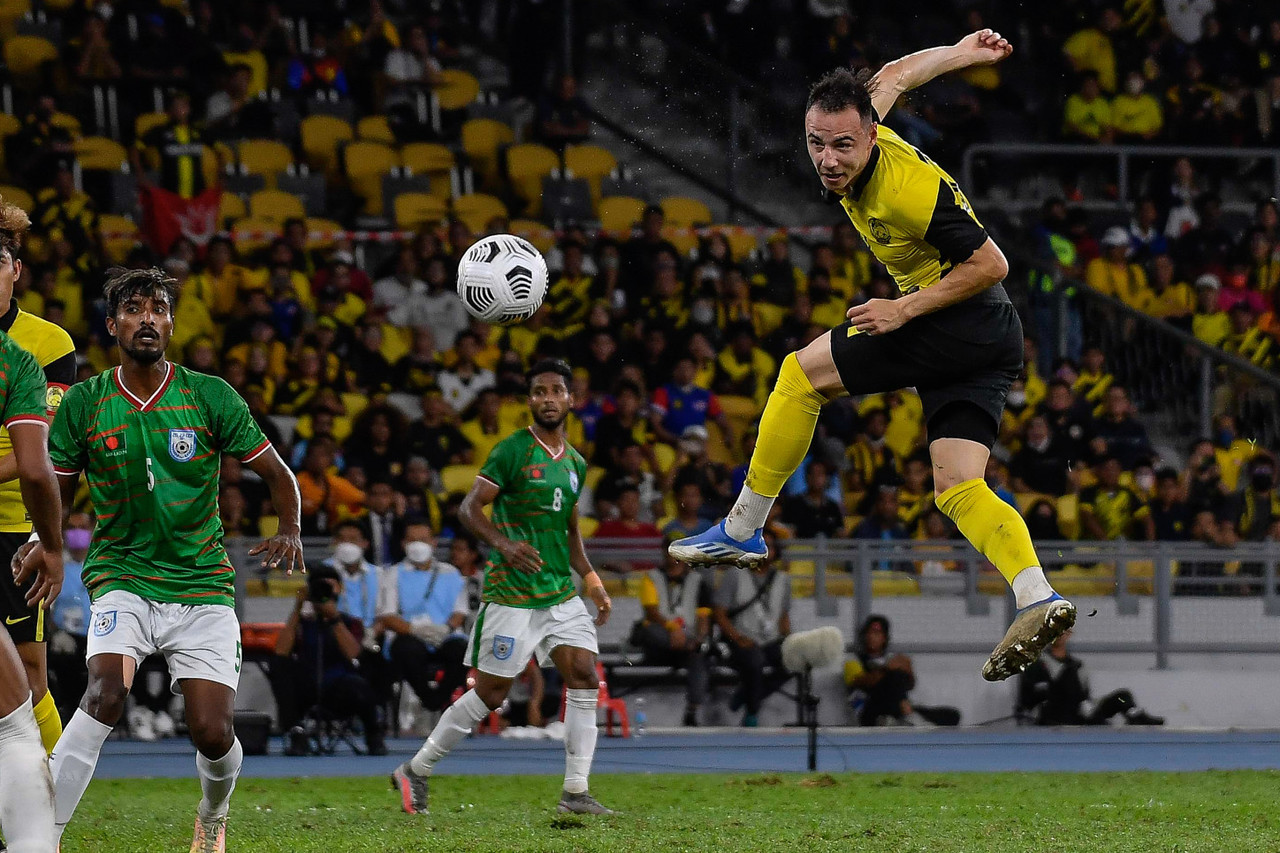 Dion Cools of Harimau Malaya heads the ball into Bangladesh’s net during the Group E match for the Asia Cup 2023 qualifying match at the Bukit Jalil Stadium on June 14. — Bernama photo

KUALA LUMPUR (June 14): Malaysia ended their more than 40-year wait to qualify on merit for the 2023 Asian Cup by scoring an emotional victory over Bangladesh at the National Stadium in Bukit Jalil here tonight.

Playing before 52,964 spectators, the national squad scored the convincing win and ended with six points to finish behind group champions Bahrain and book their ticket to the 2023 Asian Cup as one of the top five runners-up.

Their relentless attacks in the early stages finally paid off when Muhammad Safawi Rasid put them ahead in the 16th minute through a penalty, which was awarded after Matthew Davies was brought down by Mohammad Atiqur Rahman.

Just as Malaysia were dominating play, Bangladesh silenced the crowd by equalising in the 31st minute when Mohammad Ibrahim headed the ball into the net off a long cross from his teammate.

Malaysia took the lead again in the 38th minute when defender Dion Cools let fly a left-footed shot which beat Rahman to register his first goal for the national squad.

Malaysia continued to control the game and widened their lead when skipper Muhammad Syafiq scored with a header from a cross by Mohamad Faisal Halim two minutes into the second half.

Bangladesh, coached by Javier Fernandes Penato, had a chance to narrow the gap in the 57th minute but substitute Md Foysal Ahmed Fahim’s close-range shot was blocked by goalkeeper Ahmad Syihan Hazmi.

Malaysia, who last qualified on merit for the Asian Cup in the 1980 edition in Kuwait, sealed their victory  when substitute Darren Lok latched onto a pass from Muhammad Akhyar Abdul Rashid to score their fourth goal in the 73rd minute.

However, Muhammad Akhyar’s dream of getting his name on the score sheet was dashed when his header in the 79th minute hit the crossbar, keeping the score at 4-1 until referee Zaid Thamer Mohammed of Iraq blew the final whistle.

Malaysia last played in the Asian Cup in 2007 when they co-hosted the tournament. — Bernama