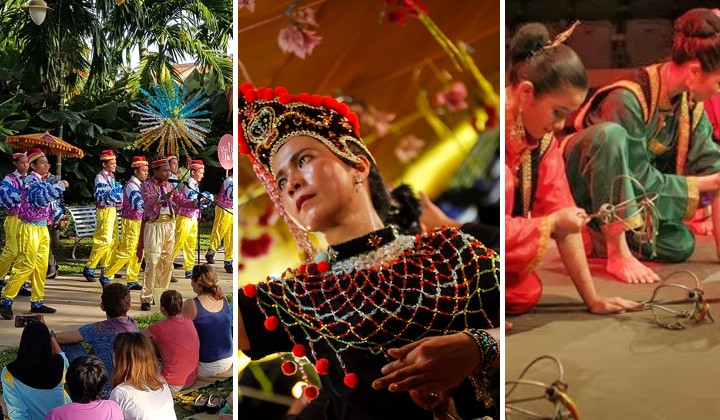 Did you know that apart from traditional wear from each state, Malaysia has its own performance according to the region?

READ MORE: Did You Know Each Malaysian State Has Its Own Special Traditional Baju Designs?

Sure, you may know of the Joget or Zapin dance that we learned about in school, but we actually have more dances that you’ve never heard of– especially these ones, which have been controversial or banned in our history.

Although there are many more other examples of dances or performances, here are a few that you should know.

Mak Yong is a traditional theatrical performance that has elements of storytelling, acting, dancing, and singing, accompanied by traditional instrumental music with intricate costumes. It is popular in the east coast of Peninsular Malaysia like Kelantan and Terengganu. It has origins in the Malay Palace in Pattani once upon a time, around 400 years ago.

There used to be an all-female cast for this performance as it is said to be performed to the female royalty, so even the lead hero was played by a female. Back in the day, a single story can be presented for several consecutive nights in a three-hour performance. This performance evolved from being done to the royalty to being done among the villagers for entertainment purposes. And the awesome part of it, it’s done in a local accent like Kelantanese.

Did you know that it was banned in Kelantan around the 1990s? Why?

Well, this performance was so ancient that it was widespread even before the Islamization movement kicked in. Apart from being done as a performance to the royalty, it was also done as a ritualistic healing practice therefore had some elements of animism and ancient Hindu-Buddist roots. Hence, the dance was banned due to not being Islam-compliant.

However, the traditional performance got recognition from UNESCO in 2005 where it was listed as a Masterpiece of the Oral and Intangible Cultural Heritage of Humanity when it was performed outside of Kelantan. Nowadays, it is permitted to be performed in Kelantan but with shariah-compliant rules.

Kuda Kepang or Kuda Lumping originated from Java, Indonesia and made its way to Johor and parts of Selangor. This dance features 9 dancers with flat horses made out of woven bamboo (called Kepang) dancing as if they’re riding the horses.

But the most interesting part is that this dance is associated with mystical spirits! For a dance to commence, a ritual is done at the beginning (buka gelanggang) to invoke the spirits to ‘possess’ the dancers so that they could ‘perform’. The dancers will then perform for hours until the end, when the shaman (Tok Batin) will eventually free the spirits from the dancer’s bodies.

Some say that while being in the trance, the dancers could do unbelievable things like jumping as high as six feet, eating shards of glass, tearing into coconuts with their bare teeth and enduring whip lashes without showing any signs of pain. Sounds cool but if you see it face to face we bet it’s eerie.

Of course, all the spirits and possessing are against Islamic law and are considered superstitions and shirk. The dance and its controversy were heatedly debated when it was banned in Johor in 2009. However, it made its way back into the cultural arts world by removing the superstition and shirk parts of the performance. Hence, no more being possessed and screaming out of nowhere on stages, hopefully.

Popular in Perak, the Dabus dance is a warrior dance that has roots in Sumatran and also the Middle East. It was not originally a dance but an art of self-defence. An art that started almost 300 years ago in Perak, this dance features dancers moving to the beat of the traditional music and singing while holding the dagger called ‘anak dabus‘. The ‘anak dabus’ looks like a sharp tool with a four-bladed head (sort of looks like an egg beater/whisker). But the head design can differ.

This dance used to be done during the Islamic times in Arab when the warriors would dance this courageously to scare off their enemies for the battle. They could walk on blades of swords, be compressed by big rocks, walk through fire, be bitten by snakes and injure themselves with the daggers. All of the injuries would be treated by the leader of the group (khalifa) after some incantation and healing. That was the original one though.

When the dance made its way to Perak, they retained some of the inhuman feats such as being stabbed in the hands and compressed by rocks. The good news is, the khalifa was still around to use incantations and rituals to treat the dancers before and after the performance. Don’t worry, the dancers were well taken care of.

Between Violating the Shariah (Islamic law) and Keeping The Tradition

Nowadays, the dance did not include any more real stabbing because, well, it didn’t sit well with society. There were rumours of people condemning this self-hurting behaviour and claimed that it was against the shariah. But it wasn’t banned or anything as some religious experts said that as long as they don’t hurt themselves or practice any superstition, there would be no reason to ban it. So the modern Dabus dance became one of the unique traditional dances of Perak today.

Now this one is more on the fun side. This is because Boria is a parody theatre that’s filled with skits, dancing, singing and… flamboyant costumes. Penang’s Boria is meant to entertain the audience with its comedic stories and foreign-influenced dances (Cha-cha-cha, Rumbas, Bollywood, etc).

The dance actually originated in Persia a long time ago where the original version of it was a passion play called ta’ziyeh, a reenactment of the defeat of Imam Hussain in the Battle of Karbala in 680 AD. This passion play evolved and was brought to Penang in the 19th century by Indian Muslim soldiers.

Passed down to generations of Indian Muslims (also called Jawi Peranakan) in Penang, the performance was adapted to the Malay tradition and also a combination of other cultures. Then the exclusive and unique Boria tradition was born. Now, truly eccentric and a part of Penang’s intangible heritage, a Boria performance involves a comedic sketch followed by a musical segment of dancing and singing, led by a lead singer (tukang karang).

Used to be banned by the British

Did you know that Boria used to be banned by the British here back in the 1930s? The reason behind this was because of its satirical and anti-colonisation stance. In fact, it was banned in the whole Straits Settlements including Melaka, Kedah and Singapore except for Penang. Penang managed to survive the ban because of its dancers, singers, merchants (good platform for business sponsorships) and Malay politicians (good platform to spread Malay nationalism at the time).

Thanks to the unsuccessful ban, this art performance still remained today and is a vital part of Penang heritage.

That’s actually not all the ‘forgotten dances’ we have in Malaysia! We also have gems such as Mek Mulung from Kedah, Menora from Kedah and Kelantan, Jikey from Kedah and Perlis, and also Hadrah from Perlis.