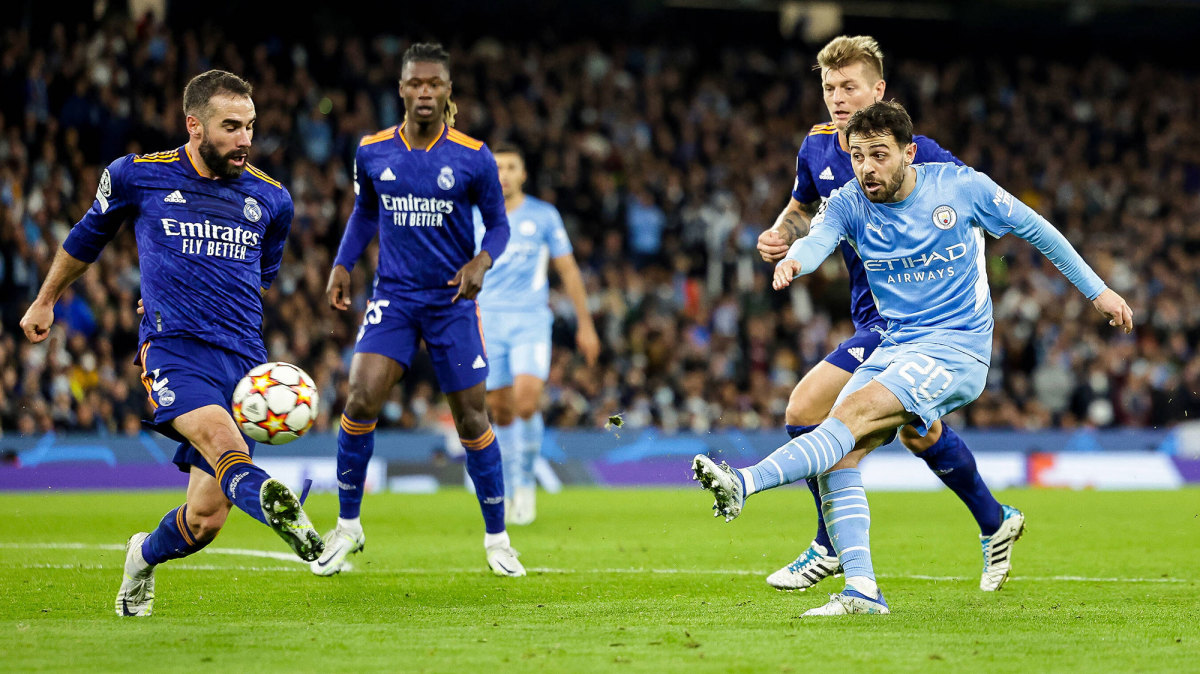 The greatest gift Real Madrid has is its profound belief in its own capacity to win. Again and again in the past decade in the Champions League, Madrid has found itself under pressure only for one of its brilliant players to do something brilliant just when it needed it. This season, if anything, the tendency has been ramped up to fresh heights. Madrid was second-best for three-quarters of both the round of 16 against Paris Saint-Germain and quarterfinals against Chelsea and still prevailed. And that it lost only 4–3 to a Manchester City that threatened at times to outclass it said much for its remarkable stickability.

The sense has been for a few years that La Liga sides can be physically dominated by Premier League teams. It happened to Madrid in the semifinals two seasons ago, when City pressed it to distraction, winning far more comfortably than the 2–1 result in each leg might suggest. Pressing was again the bedrock of City’s performance again here in what wound up tying for the highest-scoring semifinal match in Champions League history.

Madrid for long spells simply couldn’t get out, while every turnover threatened to become an opportunity for the hosts. This is an aging Madrid, an accusation that is usually leveled at its midfield, but here it was the defense that looked superannuated, with Dani Carvajal struggling against Phil Foden, while David Alaba toiled and was replaced at halftime.

City was ahead after just 94 seconds, with Riyad Mahrez surging in from the right as Madrid weirdly sat off, allowing him to deliver a perfect cross for Kevin De Bruyne to head past Thibaut Courtois. Nine minutes later, City had a second, with Foden creating space against Carvajal then laying it back from De Bruyne to cross for Gabriel Jesus, who turned and slotted in. At that stage, it felt City could score with almost every attack. Mahrez and Foden both missed good opportunities and then, from nowhere, Karim Benzema pulled one back, his deft volley converted from Ferland Mendy’s cross.

Pep Guardiola had reacted with fury to the Mahrez miss, largely because he went for goal when he could have squared it to Foden who would have had an open goal, but that response showed that he knew the game was not won at 2–0, no matter how dominant City seemed. This is a Madrid that keeps defying logic. It habitually seems on the back foot and yet somehow it keeps on nicking goals just when they are most required. And Guardiola may reflect that his teams have a habit of seeming in control in big games, only then to let it slip by conceding a soft goal.

The pattern continued after halftime. Mahrez hit the post and Foden’s follow-up was blocked on the line by Carvajal. When Foden then headed in a cross from Fernandinho, on as a makeshift right back for the injured and initial makeshift fullback John Stones (João Cancelo was suspended, Kyle Walker out hurt), the scoreline seemed a more accurate reflection of the game. But within two minutes, Vinicius Junior had outpaced Fernandinho to pull to back to 3–2.

Where Madrid deserved credit was that it was so often able to make the game about chaos, to turn the game into a contest that flowed from end to end. When it took on a more natural shape, City looked like much the better side. Bernardo Silva capitalized on a smart advantage to make it 4–2 with a left-footed laser to the top left corner, but then Benzema offered an even more audacious finish with a Panenka penalty after Aymeric Laporte had been penalized for a handball, perhaps harshly so given the ball had glanced off his head.

Benzema had already become the oldest Madrid player since Ferenc Puskás to reach 40 goals for the season. His ice-cold execution was all the more impressive given he had missed two penalties in one seven-minute span against Osasuna last week.

City had more than 60% possession. For the first 20 minutes it was almost wholly dominant. It missed opportunity after opportunity, although it won the shot count only 16–11 and the shots-on-target count only 6–5. Not for the first time in a big game in Guardiola’s career, it felt like an opportunity had been wasted; both league games against Liverpool this season went the same way.

Casemiro should return next week for the second leg, which may restore some solidity to the Madrid midfield, but given how Chelsea dominated in the Bernabeu in the last round, there’s no reason why City shouldn’t boss the game again, particularly with Walker and Cancelo to return.

The problem is, considering Madrid’s propensity to find a way and City’s tendency to leave goals on the table, that may not be enough.

“To win this competition, from my small experience, is that you have to overcome situations like football gives in front of you,” Guardiola said in his post-match remarks. “The result could have been better. Madrid is always Madrid. It doesn’t matter with 1–0 up or two or three always. So you have to perform really well two games. We performed really well the first one, you have to do it the second one. It’s a good test to show our personality as a team, and we are going to travel there to win the game.”