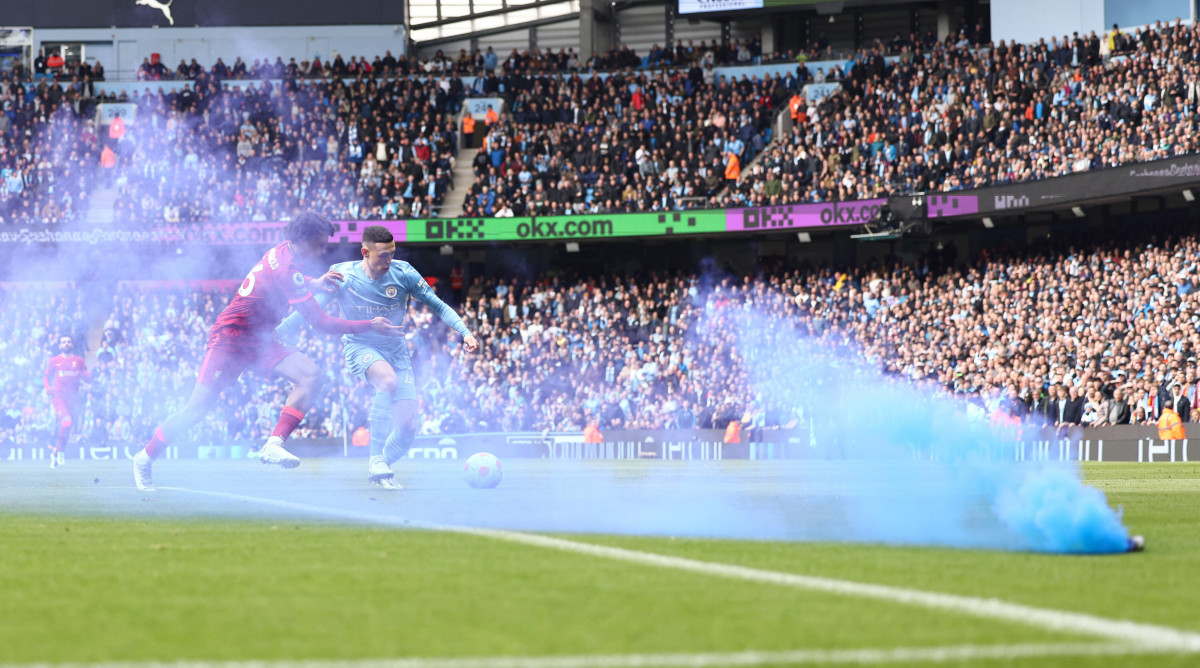 The advantage remains with Manchester City.

A second 2–2 draw of the season between City and Liverpool leaves Pep Guardiola’s side a point clear at the top of the Premier League table with seven games remaining. In that sense it was job done for City: It has resisted the immediate threat of losing the lead and will wrap up a fourth title in five years, if it wins from here on in. And yet, given how superior it had been in the first half, there must also be a sense of an opportunity missed.

One of the problems of the modern Premier League, and the gulf that exists between top and bottom, is that highlighting doubts can feel ridiculous. Liverpool has won 10 in a row; how can it be criticized? And yet there had, for some time, been a sense that its high line could be vulnerable and that in certain games (against West Ham and Inter Milan) it had gotten away with it. This is one of the paradoxes presented by the culture of superclubs: The high press that makes them so effective against lesser teams can also render them vulnerable against the elite.

In that sense, this was a very modern high-level game. Periods of sustained pressure were limited. This was a fixture played largely in transition and that, inevitably, gives the play a manic quality, which would seem to favor the more Dionysian instincts of Jürgen Klopp. But in the last two games since the international break, wins over Watford and away at Benfica, Liverpool had been unusually sloppy. Add that to the back-and-forth nature of its play and the result was a first half like this one.

If Raheem Sterling were a more clinical finisher, City would have been ahead in the fourth minute. But within 40 seconds of that wasted opportunity, it did have the lead as Kevin De Bruyne wobbled by a slightly diffident Fabinho before striking a shot that flicked off Joël Matip on its way in via the post.

Liverpool was level within eight minutes, the two full-backs combining for Diogo Jota and the thought then was that, after the early wildness, the game might be about to settle and start for real. But City continued its assault and on balance of play could easily have regained the lead before Gabriel Jesus turned in a João Cancelo cross after a corner had been half-cleared. Jesus had been a slightly surprisingly selection; but he not only did a fine job of covering Andy Robertson’s forward runs, he was a persistent threat making runs behind the Liverpool backline.

At halftime, City had been almost shockingly dominant, recording seven shots to Liverpool’s two. Profligacy has been a persistent criticism of City (within its exalted parameters). The thought even as the halftime whistle went was that Liverpool could not be so bad again and that City might pay for not having finished the game off. It took just 47 seconds of the second half for the truth of that to become apparent. Again it was a ball played in behind a defensive line that caused the problem, Mohammed Salah’s precise pass teeing up a second equalizer for Sadio Mané.

Liverpool was much better after halftime—as had been the case at Anfield earlier in the season—and the chances in the second period more evenly distributed. But City probably still had the better of them, Riyad Mahrez clipping the outside of the post with a late free kick and then squandering an even later one-on-one chance.

Any criticism must be tempered by an acknowledgement that these things are relative and City’s form—18 wins and four draws in its last 23 games—is absurdly good. But it is also the case that there are occasions when it does not make the most of its superiority. Not since the defeat to Brighton in the third-to-last game of last season has City lost the xG (expected goals) battle in a league game.

To suggest, as some have, that this is evidence it needs a striker is an oversimplification; it probably would not dominate to the same extent if it played in a different way and included an out-and-out goalscorer. But those failures to take chances do mean that there are times when it does not win games it has had the better of, and that can be costly.

In 2018–19, City held off the challenge of Liverpool by winning its final 14 league games of the season. This time, it only has to do half as much. Seven wins will bring another Premier League title.