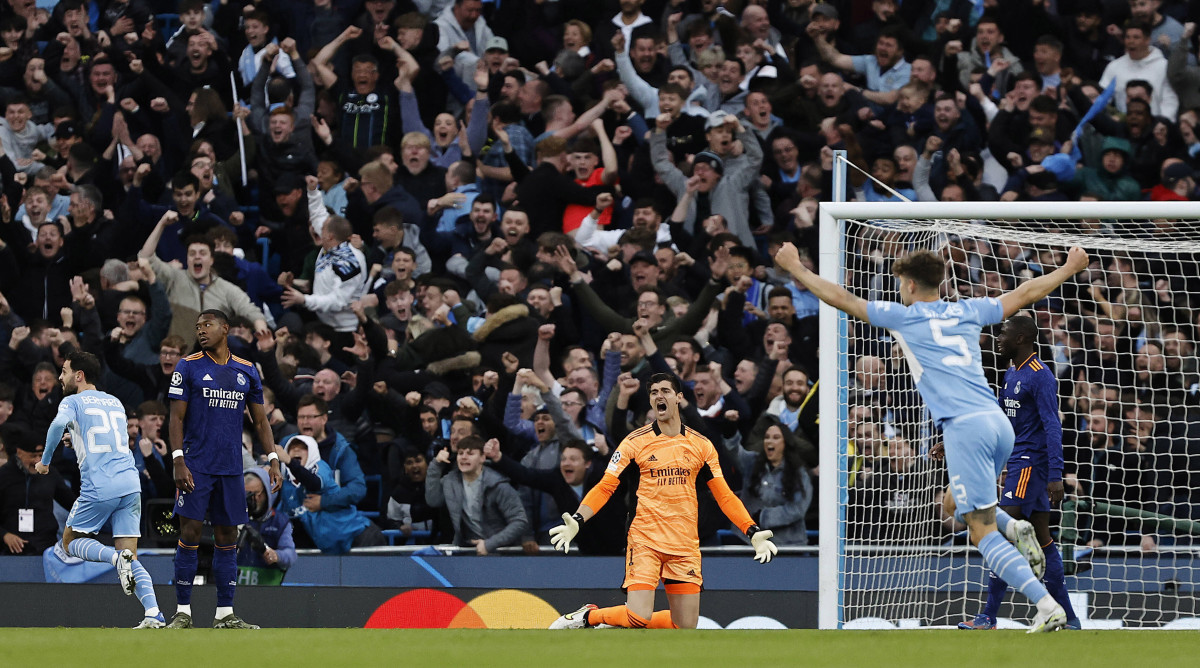 From the second minute to the very last, Manchester City and Real Madrid gave soccer fans one of the most thrilling Champions League knockout stage matches in recent memory.

And after a seven-goal showstopper at the Etihad, only chaos can be expected from next week’s second leg in Madrid, which will decide who goes to the Champions League final in Paris against either Liverpool or Villarreal.

Of the seven scores, only Karim Benzema tallied multiple goals on the night to jump past Robert Lewandowski for the Champions League season lead with 14 goals—and the French star did so in highlight fashion, just as he has done all season long. But it was City that will take a 4–3 victory into the Santiago Bernabéu for the semifinal second leg.

Less than two minutes into the game, Kevin De Bruyne sent the Etihad into a frenzy with his goal to put City ahead. Real Madrid had yet to even leave its own half when the goal came, courtesy of a cross into the box from Riyad Mahrez. De Bruyne made a brave diving header with a defender barreling toward him for his fifth goal in the last eight games.

The early goals only continued for the hosts. Fresh off his four-goal performance over the weekend, Gabriel Jesus doubled the City lead in the 11th minute. After David Alaba misplayed a De Bruyne cross into the box, the Brazilian forward collected the chance, spun and finished past Thibaut Courtois to make it 2–0 in favor of City.

City continued to push the tempo, but in the 18th minute, Benzema and Vinícius Junior were able to pressure the hosts. Benzema slipped a pass to Vinicíus down the left wing after City turned the ball over in its own defensive third, but the Brazilian chose to shoot into a crowded space rather than switch it back to Benzema.

In the 26th minute, City unlocked the Real defense once again with another courageous play from De Bruyne. The Belgian playmaker went all-in on a 50-50 challenge in midfield and won possession, sparking a counterattack that found Mahrez down the right wing. But instead of sending the ball across to a wide open Phil Foden in front of goal, Mahrez tried his luck at goal from a harsh angle and hit the side of the net.

Man City would be left to rue that miss, as it wouldn’t be long before Real Madrid would make it a game. It, naturally, was Benzema who cut the lead in half. Ferland Mendy’s cross into the area arrived waist-high, but Benzema somehow swung through it and sent the ball into the back of the net for an incredible goal. The goal was his 13th of the Champions League campaign, tying him with Bayern Munich’s Robert Lewandowski for the season lead.

Just three minutes into the second half, Man City was left to regret another missed chance when Mahrez’s shot struck the post. The rebound fell right to Foden, whose shot on an open goal was then blocked by Dani Carvajal.

But Foden would get his goal in the 53rd minute. Fernandinho, who replaced John Stones as an emergency right back, sent a perfect cross in after winning the ball as Foden rushed into the area and headed it in for the 3–1 lead.

Just two minutes later, Real pulled one back once again thanks to Vinícius. The Brazilian took advantage of Man City’s right-back crisis and burst past Fernandinho before slotting it past Ederson to make it 3–2.

In the 74th minute, Bernardo Silva stunned the Etihad with a rocket of a shot into the upper corner. After Oleksandr Zinchenko was taken down just outside the box, most Real players, including Courtois, eased up, expecting the referee to blow his whistle. Instead, the advantage was played in City’s favor before Silva launched a sizzling effort past the starstruck keeper.

In the 82nd minute, Real Madrid cut Man City’s lead to one for the third time with a Benzema penalty. After Aymeric Laporte was called for a handball inside the penalty area, Benzema stepped to the penalty spot and chipped his shot into the net with a Panenka that silenced the Etihad for his 41st goal in all competitions this season and his Champions League-leading 14th. It’s an effort that was made all the more impressive considering Benzema had recently missed two penalties—both in the same game, in a seven-minute span last week.

All eyes now turn to Madrid with Real having overcome deficits at some point during each of the last second legs. Those matches against PSG and Chelsea dazzled, and more of the same is expected next Wednesday at the Bernabéu.