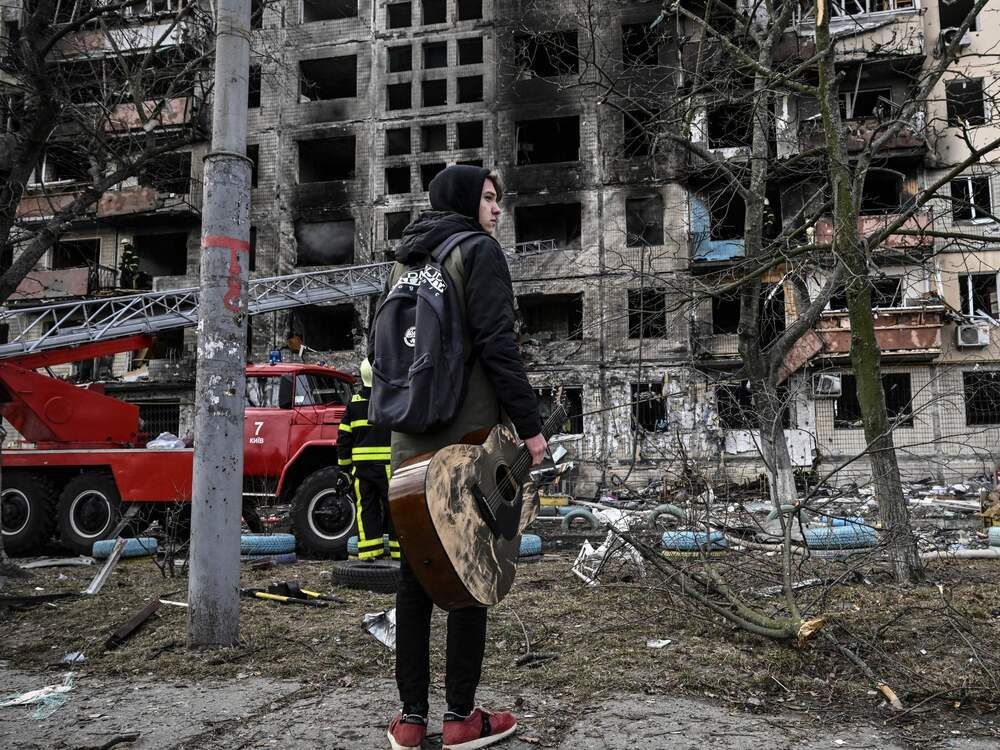 The fate of the Ukrainian people, their very freedom, is the fate of free people all over the world. Vladimir Putin wants to create an empire. He does not care what the cost is, even to his own people. Putin already attacked Ukraine twice in 2014. He took Crimea and eastern Ukraine under the pretence of shielding Russian speakers. Just like now.

I know this personally because my father’s relatives are in the occupied territory of Luhansk/Donetsk. It took me several years to contact them, and one of my cousins said that never in a million years did they think that the independence of Ukraine could so violently be taken from them.

I still cannot phone them. The messages say that the call is blocked for security reasons. I ask you: Whose security? Not Ukraine’s. But Russia’s and Putin’s security, of course. The problem is that the world did not listen or do anything in 2014, and Putin was enabled to plan a larger invasion. I was born in Canada, but my uncles, aunts and cousins are in war-torn Ukraine trying to survive.

There is now a crisis — lack of shelter, food, water, and medical supplies. Your financial support and humanitarian aid is paramount. Soon we will need to assist the refugees who will be entering Canada.

In B.C., Ukrainians stand 230,000, strong and there are 1.4 million Ukrainian-Canadians in Canada. Ukrainians started coming to Canada 130 years ago in four distinct waves. We came from an agricultural society, with a rich black soil that made Ukraine well-known as the breadbasket of Europe.

However, since the 1300s, Ukraine was almost always under the oppression of another country, and Ukrainians wanted to be free and have the right to own their own land.

My mother and father were born in Soviet Ukraine. During the Second World War, they became German prisoners of war and were subjugated to forced labour at age 16. This was after they had survived Holodomor, Stalin’s genocide of Ukrainians by starvation that killed millions of Ukrainians in 1932 to 1933.

After the war, they first had to hide so that they wouldn’t be forcibly taken back to Soviet Ukraine, and then they were able to come to Canada alone, with no other family.

During their lives in Canada, my parents always prided themselves on becoming Canadian and being Ukrainian, always helping family in Ukraine and praying for a free and independent Ukraine.

Our prayers were answered in 1991 with the collapse of the Soviet Union. The Soviets left Ukraine penniless, but Ukrainians are strong, resilient, and proud. They built a new economy from scratch. In the 31 years that Ukraine has been independent, I did not once receive a request from any of my 100 or so relatives to emigrate out of Ukraine. Not once. They loved their newly independent country.

And now? My family is again trapped, shocked beyond belief, angry, and feeling very alone in this world.

I have only been able to contact four cousins. They have told me that people are fleeing the cities because schools are being bombed, hospitals and churches are being destroyed, and their homes no longer exist.

Half of my cousins and their children and grandchildren live either in the capital city of Kyiv or in the surrounding countryside.

One cousin has 15 people crowded into his tiny village cottage, with food supplies running low and no gas. Another cousin has a granddaughter-in-law due to give birth to a baby girl any day. Because there is no access to medical care, they sent her and his grandson on a train to the border. Can you imagine sending your child, nine months pregnant, into the unknown? Praying and hoping that both mother and unborn baby survive?

As we watch the horrific war and the courageous Ukrainians from the comfort of our Canadian homes, Ukraine is giving all free democratic countries a lesson in what it takes to defend your freedom. A violent and ruthless aggressor such as Putin has also given us a lesson to never take freedom for granted.

We are one voice in solidarity for the children, men, and women in Ukraine.

This editorial is adapted from a recent speech by Mary Ann Pylypchuk, board chair of the Ukrainian Studies Foundation of B.C., at a Surrey rally in support of Ukraine organized by One Voice Canada.

Letters to the editor should be sent to provletters@theprovince.com. The editorial pages editor is Hardip Johal, who can be reached at hjohal@postmedia.com.

Is there more to this story? We’d like to hear from you about this or any other stories you think we should know about. Email vantips@postmedia.com.