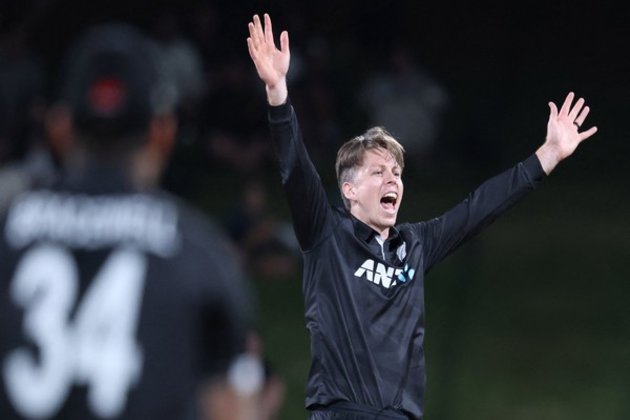 Bracewell scalped two wickets and scored 42 runs off 40 balls, to chase down the target of 217 in just 38.1 overs on Tuesday. Apart from him, Allen Finn and Tom Latham scored 60 and 55 runs, respectively.

With this win, New Zealand took a 2-0 lead in the three-match ODI series against Ireland.

The start of the match was delayed due to the rain but this was a perfect opportunity for New Zealand and they made the most of it by winning the toss and choosing to bowl. The decision enabled them to make use of the pitch conditions perfectly giving them an advantage before the match started.

The decision certainly was a great one as it showed its effects from the start of the game itself with Ireland struggling to get off the mark in the first three overs and even losing a wicket. Ireland was reduced to a score of 5 runs and 2 wickets at the end of 5 overs.

The batting order of Ireland had already started to fall. Harry Tector, the star of the first ODI was up next but wasn’t able to shine in the second ODI as he was caught at the hands of Bracewell and the score of Ireland stood at 3 for 32.

Andy McBrine and Curtis Campher were also dismissed pretty quickly as none of the partnerships stood for long enough to get Ireland to a respectable score. George Dockrell put up a much-needed fight for his team with a score of 74 off 61 balls.

In the 44th over Dockrell was caught out as well at the hands of Duffy. With Ireland only shy of 15 runs to achieve the total of 200 runs, Mark Adair came on to ensure that the team achieve a respectable total of 216 runs in the 50-over match.

The Blackcaps’ spinning trio of Michael Bracewell, Mitchell Santner and Glenn Phillips made sure that Ireland’s batting was kept in check and they were reduced to a small total of 216 runs.

Bracewell put on a tremendous performance conceding only 26 runs in his 10-over spell while scalping 2 wickets with Santner and Phillips also scalped two and one wickets each. Matt Henry also performed well as he got two wickets in his 9-over spell.

The New Zealand team came in confidently in the next innings with the aim to clench to the series chasing only a total of 216 runs. Though their confidence was soon shattered by Adair taking the wicket of Martin Guptill on the first ball itself which was followed up by the wicket of Will Young on the next ball in the same fashion. The pressure was on the New Zealand side this time as the rest of the batting order needed to turn up in the game.

However, the pressure was quickly off New Zealand thanks to the partnership between Finn Allen and captain Tom Latham completing 56 runs in the first power play. Allen completed his half-century and things were looking good for New Zealand.

As the middle overs of the match approached, Ireland needed a ray of hope which came as Allen got caught out by Campher at the score of 60 runs which was followed by quick dismissals of Henry Nicholls and Glenn Phillips.

After a wonderful bowling performance, Bracewell was up next to show his class with the bat and partner with captain Tom Latham to lead his team to victory. But Latham was castled soon after the arrival of Bracewell on a trick ball by Simi Singh. The captain put up a worthy performance of 55 runs off 73 balls.

It was all up to Bracewell to complete the knock and carry his team to victory and he turned up when needed with the bat and the all-rounder did not disappoint. Bracewell with his crucial knock of 42 runs in 40 balls and won New Zealand the match with a magnificent six.

For Ireland, both Mark Adair and Simi Singh put up decent performances scalping 2 wickets each while Craig Young and Curtis Campher got a wicket each for the team.

Thanks to the vital performance of Bracewell with both bat and ball, New Zealand won the match and clinched the series.