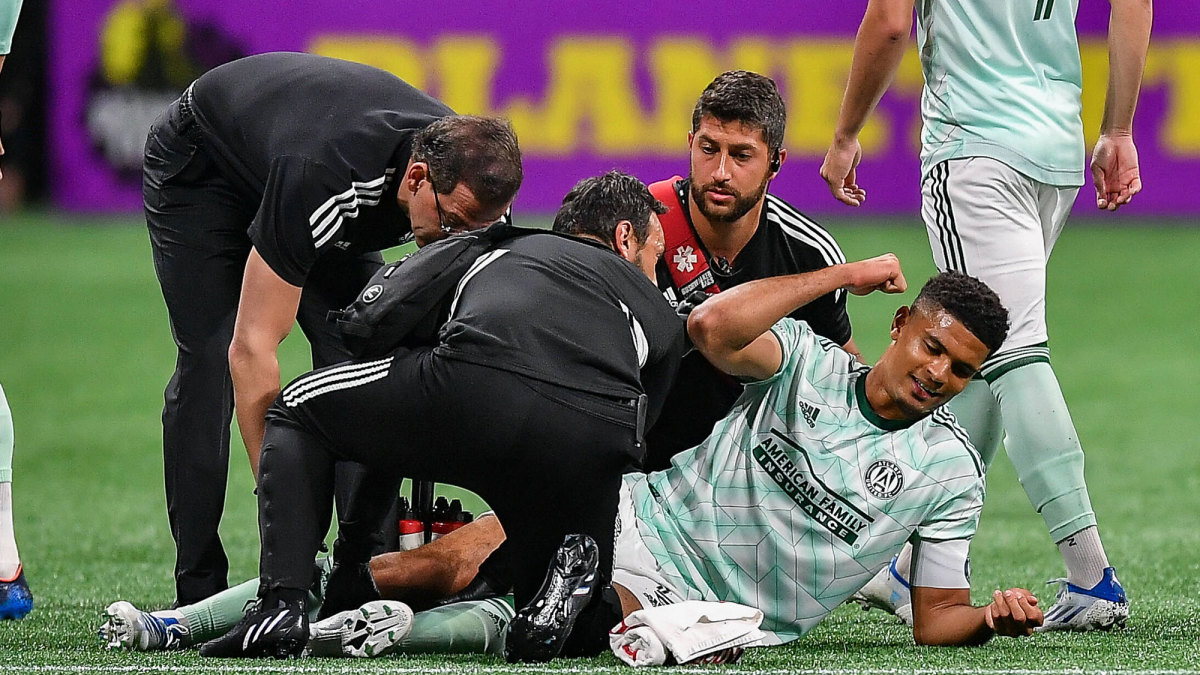 The injury bug has never been all that kind to the U.S. men’s national team during the 2022 World Cup cycle, so expecting a full-strength squad in November always seemed like somewhat of a pipe dream. Nevertheless, the recent rash of injury woes is getting a bit out of hand, even by U.S. standards, and with first kick in Qatar a little over six months away, some of the hypothetical roster scenarios are starting to get a bit more real.

Following injuries that cut Weston McKennie, Gio Reyna, Sergiño Dest and Chris Richards’s club campaigns short came what appears to be a more significant, long-term blow. Miles Robinson, the Atlanta United captain and center back who has carved out a regular role at the heart of the U.S. defense, crumpled to the Mercedes-Benz Stadium turf in a heap Saturday night, following a noncontact injury to his left Achilles. Atlanta United manager Gonzalo Pineda feared the worst before an MRI, and Robinson’s immediate reaction spoke volumes as he pounded the ground in anger before being stretchered off. Those presumptions were confirmed Monday by Atlanta, which announced a torn Achilles, and Robinson’s hopes of going to the World Cup are effectively toast. Even the most optimistic of recovery timelines would cast overwhelming doubt on him being in World Cup shape come mid-November.

Robinson, 25, was one of the USMNT’s most dependable and consistent performers in qualifying, starting 11 of the 14 matches in the Concacaf Octagonal. Before that, he helped the U.S. win the Concacaf Gold Cup, scoring the goal in extra time that clinched the victory over Mexico in the final. In an ecosystem where change and rotation are often constants, Robinson was one of the more reliable figures when it came to filling out a team sheet. Now a likely lock for Qatar is anything but, and the U.S. is faced with a key question to answer.

“Just heartbreaking,” Atlanta teammate and fellow U.S. defender Brooks Lennon said after Saturday’s 4–1 win over Chicago. “In the first half, it really shook us as a team. It took us 15 to 20 minutes to kind of regroup. I don’t know if you could tell when he went down, we were losing possession of the ball. I think we were all kind of stunned. We’re praying for him. We wish him a speedy recovery.”

If Robinson was not a sure starter for the U.S., he was awfully close to it, and an extended absence opens up opportunities elsewhere for the presumed spot alongside Walker Zimmerman in a four-man U.S. defense (and if the U.S. were to operate with a three-man back line, Robinson would be a good bet to be the left-sided starter). The U.S. has only a pair of camps before the start of the World Cup, so the chances to rise up the depth chart are at a premium.

According to The Washington Post, Cameron Carter-Vickers, the 24-year-old center back who showed out at Celtic this season (31 starts on loan from Tottenham for Scotland’s first-place side) will be called in for the upcoming camp later this month—something that was planned before Robinson’s injury. Carter-Vickers was not one of the 38 players coach Gregg Berhalter turned to in qualifying, and he last appeared in a U.S. match in June 2019. He was more of a fixture in the Dave Sarachan bridge year in 2018, but he has struggled for consistency on the club level. That’s one new face to watch for the June 1 and 5 friendlies against World Cup–bound Morocco and Uruguay, respectively, and the June 10 and 14 Concacaf Nations League group matches vs. Grenada and El Salvador.

Beyond that, there’s an opening for Aaron Long to reclaim a more prominent role. Ironically, it was Long’s Achilles’ tear in May 2021 that may have helped accelerate Robinson’s ascent to the national team by creating a void at the position, but the New York Red Bulls captain is back and even played a role at the end of qualifying for the U.S. after being integrated into training dating back to November.

The wild card in all of this is John Brooks, the former shoo-in turned castaway who appeared in the first window of World Cup qualifying, played poorly and has not been called back in since. He’s out of contract with Wolfsburg after the Bundesliga season ends and will need to sort his club future, but solely from a potential and upside standpoint, it’s hard to argue against his being given the chance to return. At his best, he’s a left-sided, left-footed defender with aerial acuity and World Cup experience. No other player in the U.S. pool can claim that.

If Richards, who also stands to benefit from the additional minutes up for grabs, cannot go in the upcoming camp as he recovers from a thigh injury, the likes of Mark McKenzie and Erik Palmer-Brown could find themselves playing for greater roles with the U.S. as well. Both were on the periphery of qualifying, with McKenzie, 23, starting two games and Palmer-Brown, 25, playing 10 out-of-position minutes at the Azteca in March to help close out a valuable point vs. Mexico.

On the flip side, if a rapid recovery is not in the cards, it would be a massive opportunity lost for Robinson, and in more ways than one. There’s the immediate and obvious downside of missing a World Cup. But then there’s also what playing on the World Cup stage could turn into for him. Perform well in Qatar, and the multimillion-dollar offers could be rolling in from abroad for a player who has played only domestically as a professional. His contract runs through the 2023 MLS season, making next winter an ideal window during which to secure a transfer.

“I really think that Miles could play in any league in the world,” former Atlanta and U.S. defender Michael Parkhurst told ESPN last month. “I don’t think that he’s the final product, there’s little things that he needs to work on and improve on, but I’ve never played with anyone that’s a better defender, I’ve never seen a better one-on-one defender.”

He’s still young, and the 2022 World Cup isn’t the end-all. But for someone so dependable to go down in such a freakish and abrupt way is a stark reminder that nobody’s place on the U.S. squad is a given. Unfortunately, that’s not a reminder that those charged with constructing the roster really needed.