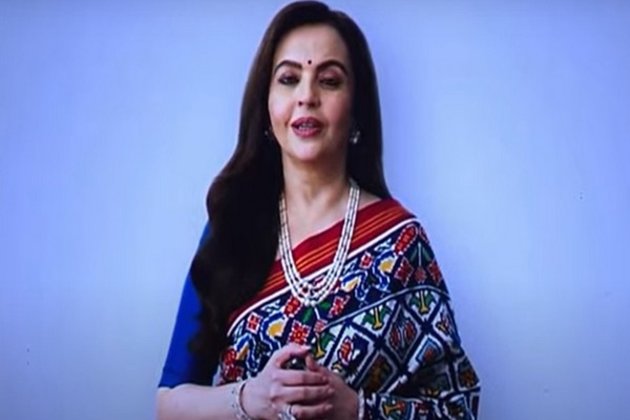 Mumbai (Maharashtra) [India], June 16 (ANI): Following the conclusion of the IPL media rights auction 2022, Director of Reliance Industries Ltd. Nita Ambani said that they have a ‘Mission to take IPL to cricket fans in every part of the world.’The IPL TV and digital rights for the 2023-2027 cycle have been sold to Star India and Viacom18 respectively for a whopping Rs 48,390 crore for 410 matches at e-auctions on Tuesday. IPL is now the second most valued sporting league in the world in terms of per match value.

Viacom18 has acquired the rights to digitally stream Indian Premier League matches in the Indian sub-continent for the seasons from 2023 to 2027. It has also won the India digital rights for a special package of 18 games in every season. Globally, Viacom18 has won television as well as digital rights in three out of five international territories, including major cricketing nations.

“Sports entertain us, inspire us and bring us together. Cricket and IPL personify the best of sport and the best of India, which is why we are proud to be deepening our association with this great game and this wonderful league. Just like with everything we do, our mission is to take the joyful experience of IPL to cricket fans wherever they are – in every part of our country and around the world”, said Nita Ambani according to an official Viacom18 release on Wednesday.

The Package A (of TV) has been sold to Star India at Rs 23,575 crore which is Rs 57.5 crore per match and Package B of Digital Rights as well as Package C for selected 18 games in digital space for India each season has been sold to Viacom-18 at Rs 23,758. Reliance-owned Viacom-18 also won Australia, South Africa and United Kingdom rights. Times have got MENA (Middle East North Africa) and the United States and the Rest of the World Rights.

Viacom18 outbid reputed broadcasters and digital companies to establish itself as a leading digital media, entertainment and sports destination. With its wide reach, strategic tie-ups and increasingly popular content bouquet, the digital platforms of Viacom18 are gearing up for leadership in India as well as with the Indian diaspora globally. With these IPL rights, Viacom18 will be able to take India’s biggest sporting event to every nook and corner of the country. It will make IPL available to every Indian in every part of India, including the 60 million FreeDish homes which today are not able to access this popular content.

Viacom18 has demonstrated that it is building the digital platforms of the future while continuing to strengthen traditional television broadcasting. It has state-of-the-art digital expertise to provide the best possible user experience to hundreds of millions of Indian and global consumers. The digital platforms utilise a combination of top-class content as well as digital prowess through big data analytics and predictive algorithms to offer contextualised and relevant content to each consumer.

After bagging a slew of sporting rights in soccer (FIFA World Cup, La Liga, Serie A and Ligue1), badminton, tennis and basketball (NBA), this is the first major foray of Viacom18 into cricket. The IPL rights make Viacom18 and its platforms one of the largest sporting destinations in the country. (ANI)