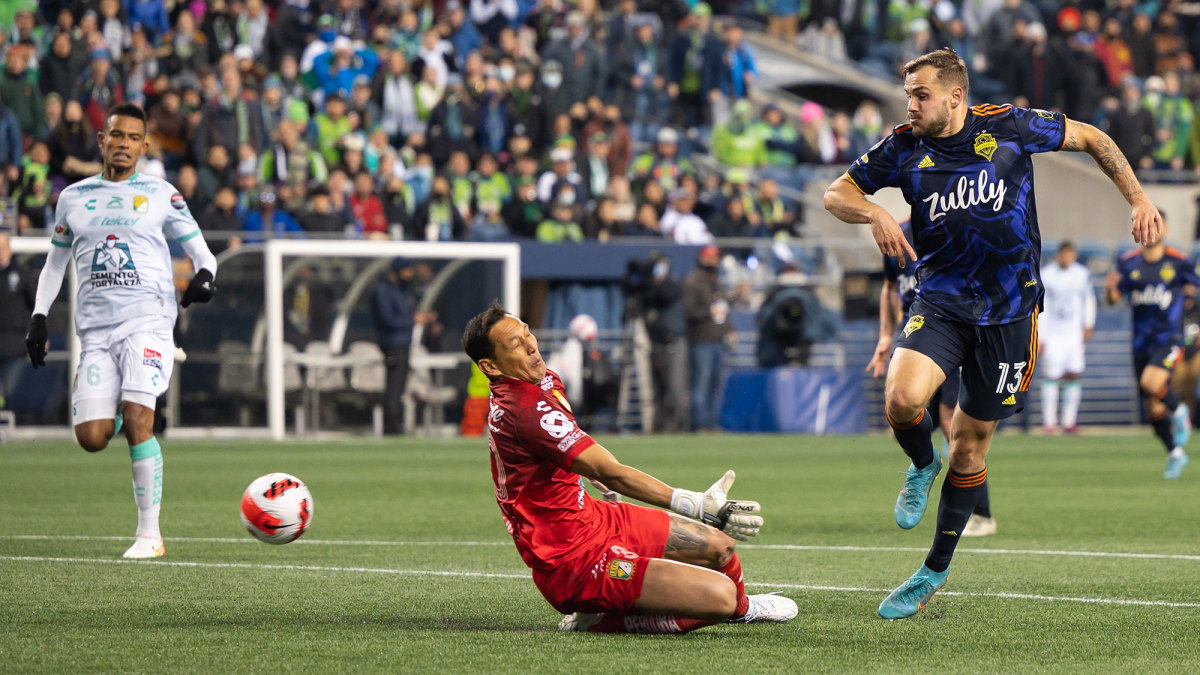 Sean Johnson was an avatar for all of us late Tuesday night, stunned and helpless as a long-range blast from veteran midfielder José Contreras whizzed by him.

The 88th-minute golazo lifted Guatemala’s Comunicaciones, the de facto Central American champions, into a stunning, 5–5 aggregate tie with the MLS Cup holders. Visiting New York City FC had yielded three goals in under 20 minutes and was hanging on for dear life thanks to the away goals tiebreaker.

Comunicaciones is a traditional domestic power but hardly a regional heavyweight. Its run to the last eight of the Concacaf Champions League, which included a penalty shootout defeat of the Colorado Rapids, was a surprise. The vast majority of its roster is from Guatemala, whose national team is ranked 123rd in the world. The country hadn’t produced a CCL quarterfinalist in nine years.

Comunicaciones didn’t have much business pushing NYCFC to the brink. But as we’ve seen for two decades, Concacaf has a way of ruthlessly exposing and punishing MLS clubs. Opponents that appear worse on paper become problematic adversaries. And Mexican sides, which operate without MLS’s financial restrictions and bring a fearsome home field advantage to bear, are dominant. Liga MX clubs have claimed 16 consecutive Concacaf crowns, and entering the 2022 tournament, MLS entrants had won just nine of the 51 home-and-home series between the leagues.

Don’t bet on an MLS team to win this year’s CCL. As long as there’s a Mexican club left in the bracket, the title and trophy are more likely to remain south of the border. Sixteen straight is no accident. But the odds that MLS’s infamous run of failure ends this spring are still better than ever. And a big part of the reason is what saved NYCFC on Tuesday—multigoal home wins.

NYCFC’s 3–1 victory in last week’s “home” leg (the game was played in East Hartford, Conn.) provided just enough cushion to absorb Tuesday night’s second-half collapse. And that bodes well for the other MLS contenders. On Wednesday evening, the New England Revolution will kick off against UNAM Pumas in Mexico City with a 3–0 aggregate advantage. Then Thursday, the Seattle Sounders will visit Club León with an identical three-goal edge.

The remaining quarterfinal will be settled Wednesday on the artificial turf of the Stade Olympique, where CF Montreal will host six-time Concacaf champion Cruz Azul. The Mexicans hold a 1–0 aggregate lead and will be favored against a much more modest Montreal squad. But Montreal already has enjoyed a notable CCL run because of its round-of-16 defeat of Santos Laguna. And it was secured with a multigoal home win, a 3–0 second-leg triumph on Feb. 23.

Over the course of the previous 10 CCLs, MLS clubs defeated visiting Mexican opposition by multiple goals just five times in 36 attempts. They won all five two-leg series. In this year’s CCL, MLS teams have already posted three multigoal wins over Liga MX foes. That, along with NYCFC’s escape, leaves MLS in position to make CCL history. It’s never had three semifinalists. Two is rare, and there has been just one in each of the past three campaigns. But if New England and Seattle hold on, that’ll make three. And if Montreal can channel the Stade Olympique mojo that propelled it to the 2015 finals, then MLS will have ended its long run of international embarrassment at the semifinal stage.

That remains unlikely. One or more Mexican clubs could turn it around. Concacaf always has plenty of surprise, controversy or heartbreak in store. And Montreal is still an underdog. Despite their unusual advantage on the scoreboard, both the Sounders and Revs are aware there is work to be done.

“León is a very well-coached, very good team, and 3–0 might seem like we are the favorites. But I already warned [the Sounders] that we’re not the favorites, that we must approach the game in the same fashion, because the first 30 minutes, I know they are going to come at us with everything that they have,” Seattle coach Brian Schmetzer said following the quarterfinal opener. “So we are not going to say we’ve already won this. … It’s far from over. We’re too smart for that.”

New England manager Bruce Arena, who won the Concacaf title with D.C. United in 1998—the tournament quarters, semis and final were played in the nation’s capital—struck a similar tone.

“If we’re guilty of anything, it’s not getting more goals,” he said after the Revs dispatched Pumas. New England poured forward in the final moments as if it were trailing, searching for an additional goal. Adam Buksa found it in stoppage time.

“[Our] third goal at the end of the game was huge,” Arena said. “I think 2–0 is really inviting for [Pumas] next Wednesday—not that they’re not going to be ready to make up this goal difference. But I think the third goal was huge.”

The built-in disadvantages that MLS faces in CCL—which are almost entirely of its own making—have long been discussed and lamented. The restrictions on roster building make it exceedingly difficult to construct a team with the depth to negotiate a long CCL run. Mexican clubs are less top-heavy than MLS sides and often spend more on the middle and back ends of the roster. The fact that MLS clubs capitulate toward the end of games so frequently is testament to that discrepancy.

The league’s engineered parity also makes sustained excellence unlikely. Teams rotate in and out of CCL competition, and few accumulate the experience and battle scars that might make the difference under the lights in Mexico City or Monterrey. Bad MLS teams can reverse their fortunes quickly, but good sides that qualify for CCL also can look mediocre a few months later.

Then there’s the tournament’s winter-spring timing, which MLS has preferred in recent years even though it’s a significant liability. The MLS offseason is relatively long compared to its Latin American counterparts, whose teams usually are several games into their domestic campaigns when CCL kicks off. On top of everything else, MLS entrants have to deal with rust, a lack of fitness and integrating new signings when the international stakes are highest.

It’s all added up to two decades of futility. MLS failure is now so predictable that the pressure to win CCL is almost nonexistent. Consider the fury that followed Paris Saint-Germain’s collapse in Madrid last week. Lionel Messi was even booed a few days later at the Parc des Princes. Increased expectation and investment provides a backdrop for increased disappointment. There is some pressure to win in MLS. There’s not enough pro soccer tradition to sustain attendance in most U.S. cities, so results can impact revenue. Coaches get fired. But it’s never connected to CCL. Nobody is dismissed or called to account if they lose in Concacaf. A team’s trajectory or plan isn’t questioned. Fans don’t protest. Columnists aren’t critical. Season tickets aren’t canceled. MLS executives say the tournament matters, but they won’t loosen the reins and give more ambitious clubs the leeway to contend consistently. Actions speak louder.

But many of those ingrained disadvantages have been mitigated this year. The MLS regular season’s early start, necessitated by the November-December World Cup, forced teams to start training and preparing earlier. They were in better shape and more match-fit when CCL play began. Increased roster spending has helped smarter clubs build more balanced rosters. Money matters—in the allocation money era, which began in 2015 and targeted the improvement of MLS rosters beyond Designated Players, the league’s clubs have won eight of 28 home-and-home series against Liga MX. That .286 percentage, while still bad, compares to a pathetic 2-for-24 (.083) before ’15.

Seattle, New England and NYCFC are good teams by recent MLS standards, and Montreal can, at times, assemble a product that’s more attractive and effective than the sum of its parts. Notably, the Sounders beat León 3–0 without injured DP stars Nicolás Lodeiro and Raúl Ruidíaz (both traveled to Mexico). New England shut out Pumas without injured goalkeeper Matt Turner. Earl Edwards Jr. made three saves. MLS’s low-stakes regular season gives coaches the leeway to rest and rotate players if they choose. The league’s four remaining CCL hopefuls are a combined 3-7-2 across the first three MLS match days. But when all you have to do is finish seventh in your conference to have a shot at the championship, there’s plenty of time to make up lost ground.

Meanwhile, this year’s CCL is being played without the Mexican sides that have dominated it in recent years. Monterrey, Tigres UANL, Club América and Pachuca are among the Mexican powers that routinely crush MLS dreams but failed to qualify for the 2022 edition. Among the three Liga MX teams still alive—Cruz Azul, Pumas and León—La Máquina are in the best domestic form at 5-3-2. But they’ve won just one of four and have fallen to fifth place.

Tuesday’s roller coaster in Guatemala City proved how precarious CCL prospects can be, and how quickly optimism can be snuffed out. The odds still aren’t in MLS’s favor. And even if one of its four entrants does pull this off, it will remain a historic outlier, maybe even a fluke, until its teams start winning CCL consistently. It will be a moment for the victor to savor, not necessarily the league at large. But a trend starts with one, and circumstances have never been more favorable for that one to emerge. Multigoal home wins have paved the way for multiple MLS semifinalists. Circumstances have aligned. There’s never been a better chance for MLS to take this important step toward international credibility.