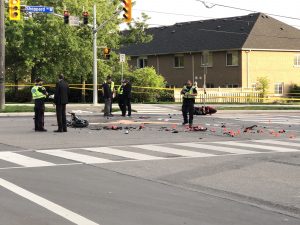 A male motorcyclist is dead following a two-vehicle crash in North York on Monday night.

The incident happened just around 6:15 p.m. near Sheppard Avenue West and Sentinel Road.

Toronto paramedics say the man was pronounced dead on scene. No other injuries were reported.

The cause of the crash is not yet known.