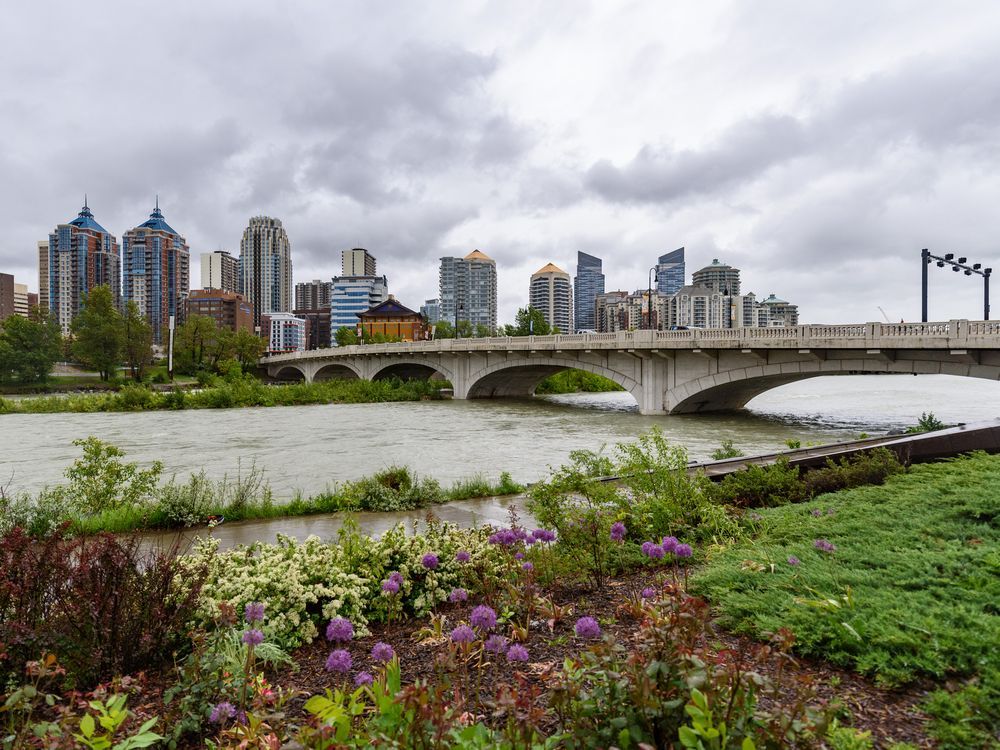 It’s hard to keep her mind off the nearby swollen Elbow River that flooded her home nearly nine years ago, said Brenda Leeds Binder.

“I’m working from home this week and I can be ready to act quickly,” said Leeds Binder.

“It’s certainly nerve-racking for a lot of people with plenty of rain.”

In June 2013, Leeds Binder’s east Elbow Park home was swamped with more than 1.5 metres of water that ravaged her basement, forcing her eviction for a few weeks.

“We were one of the better houses on the block — the entire neighbourhood was severely impacted, it was a bit of a ghost town for a few months,” she said.

“It took a significant toll.”

Nearly 100,000 Calgarians living mainly in riverside communities were evacuated during the 2013 deluge, which led to five deaths and $5 billion in insurable damage.

The experience led her to lobby for the Springbank off-stream reservoir that’s meant to head off severe flooding, with part of that effort involving presenting at the Natural Resources Conservation Board hearing last year.

“We had hundreds of letters and submissions, and a common theme was always the mental impacts and stress from 2013, the disruptions, their lasting and enduring impacts,” said Leeds Binder.

Following years of environmental assessment and determined opposition, the Springbank project was approved by the federal government and work has begun, with a scheduled 2024 completion.

Those effects have indeed been prolonged and only exacerbated by this week’s flooding scare in southern Alberta, said Dr. Caroline McDonald-Harker, a Mount Royal University sociologist who’s studied the aftermath of the 2013 disaster and the 2016 Fort McMurray wildfire.

“Over half of the hundreds of families impacted were still suffering long-term (psychological) effects five years after the flood,” she said.

“A lot of these effects can last over 10 years and (this week’s conditions are) adding additional stress; this is creating a little bit of PTSD, emotions that are stressors.”

Some of those struggles involve depression, anxiety, psychosomatic stress and nightmares, she said.

McDonald-Harker said she knows of families so stricken with anxiety, they are missing work or school in anticipation of possible evacuation.

“Major disasters leave not only physical damage but psycho-social impacts that can last a lot longer.”

With climate change making natural disasters more severe and frequent, society will be dealing with their psychological trauma more often, she added.

It’s likely her colleagues are dealing with clients’ rising anxieties this week, said Sarah Rosenfeld, an associate director at the Calgary Counselling Centre.

“We provided specific counselling for people working through that (in 2013),” she said.

“We’ll probably get some feedback this week . . . people are apprehensive about things out of their control, such as nature.”

Those clients would be told it’s good to talk through those concerns and be reminded there are actions they can take in case of emergency, and that the city and province are better prepared this time, said Rosenfeld.

“But if you’re near an area that was flooded in the past, it’s hard to make those distinctions,” she said.

Both McDonald-Harker and Leeds Binder said much more open communication between government officials and the public — along with flood mitigation efforts since 2013 — should limit those anxieties.

“If people don’t have access to that information it’s going to heighten their stress, but we can go to sleep in peace knowing we’re being watched over,” said McDonald-Harker.

“All Calgarians stay calm. We are organized, we are well-practised,” she said.

“There are so many people at the emergency operations centre that are working together to make sure that we protect critical infrastructure and to keep you safe.”

But she said more work needs to be done to bolster flood defences, particularly along the Bow River, to more fully allay Calgarians’ fears.

“I’m hoping this week is a catalyst to accelerate the pace of addressing concerns along the Bow River,” she said.

The city has fortified the Bow River’s banks in several places and the province is reviewing three options for a flood mitigation reservoir upstream from Calgary, with the feasibility study due to be complete next year.