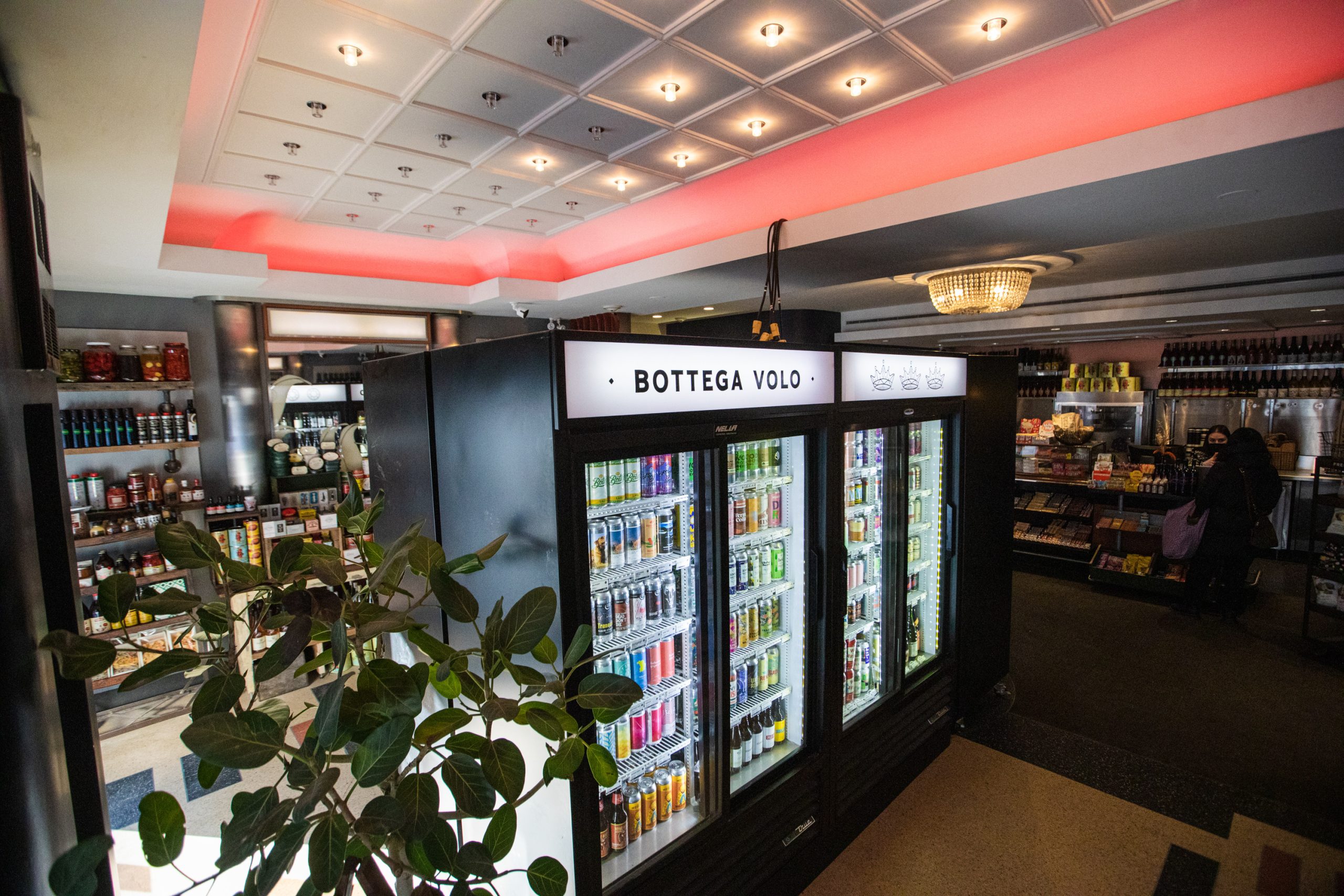 Originally pandemic pivots, shops selling beer and wine to go are now looking to the future – but critics worry it could be opening the door too wide

Bottega Volo, located in the foyer of the Royal Cinema on College next door to Birreria Volo.

Bars and restaurants returned to indoor dining again this week, but there’s one lockdown-induced trend that is here to stay in Toronto: bottle shops.

A rare silver lining during the pandemic, the specialty beer and wine shops popped up all over the city once Ontario changed its liquor laws to allow bars and restaurants to sell alcohol for takeout and delivery. Originally a temporary measure to help those establishments survive the closing of their dining rooms, the change eventually became permanent.

Then, at the beginning of 2022, came a change people in the bar and restaurant industry have been pushing for for decades: a discount on alcohol from the LCBO.

The wholesale price now discounts licensees alcohol purchases from the LCBO – whose provincial government controlled alcohol monopoly means they’re involved in all alcohol sales – by 10 per cent. With other new measures, like an elimination of mark-ups on cider, wine and spirits along with HST rebates and container deposits, the Ontario government says this is effectively a 20 per cent discount for licensees compared to regular folks walking into an LCBO and buying a bottle of wine.

“A permanent wholesale discount will put about $60 million a year back into these important businesses, so they can invest in themselves and their workers,” said Finance Minister Peter Bethlenfalvy in a press release.

Loosening the rules around liquor sales beyond the LCBO has been a controversial topic for decades, with some calling the rise in bottle shops “backdoor privatization,” but the new tweaks for 2022 seem to have flown under the radar this time around (OPSEU, the union representing LCBO workers, did not respond to multiple requests from NOW). That’s likely because they went live during the Omicron wave that closed restaurants for indoor dining again and turned LCBOs into overwhelmed outlets for hard-to-find rapid tests.

But even if you don’t notice them, bottle shop owners say the new rules mean the new liquor retail landscape will likely persist long beyond the pandemic.

Bottle shops were initially thought to be temporary.

Though they popped up all over the city in the early days of the pandemic, many of them were thought to be pivots – that pandemic buzzword applied to any business that had to rethink its model. But in the same way some coffee shops have kept up their hybrid bodega businesses, many bars and restaurants have made their bottle shops permanent.

Some, like Peter Pantry, have taken over adjacent spaces to continue selling wine and cocktails to go while also reopening their dining rooms. Others, like Volo, have gotten more creative.

While Bar and Birreria Volo have been offering takeout beer since it was allowed, the renowned beer bars now also have a dedicated bottle shop inside the lobby of the Royal Cinema. You couldn’t see a movie in the historic rep theatre in the most recent shutdown, but you could go there and buy sauces, oils, fancy canned fish and some of the most snob-worthy beer bottles in the city.

Volo’s Tomas Morana has been one of the most vocal advocates for wholesale pricing from the LCBO. He’s happy that it’s finally happened, but he says the change is way overdue.

“My position is that [the new laws] should have always been there. There shouldn’t have had to be a pandemic to make it happen,” he says. “But it’s great that it happened. It should cause some much-needed relief.”

While the changes have been positioned as a “lifeline” to bars and restaurants, Morana says it’s likely not a big enough discount to single handedly save a drowning business. Margins are already razor-thin, and pandemic era factors – like yo-yo-ing restrictions, supply chain issues, food price increases, labour costs, shipping and packaging and inflation – mean that the savings are more likely to decrease losses than increase profits.

If you’re a customer buying a $15 cocktail from a bar, for instance, you might not see that price go down. Where it does make a difference, he says, is for bottle shops and quasi-retail businesses like his.

“Otherwise, the margins aren’t there yet,” he says.

Toronto’s bottle shop scene has already matured rapidly in the less-than-two years it’s existed. Now, at spots throughout the city, it’s legal to get refillable growlers of draught beer, pre-made cocktails and all sorts of specialty groceries. At the beginning, it was mostly cans, bottles and make-it-yourself cocktail kits with a token bag of chips to make it legal.

Food sales are actually still a requirement. Liquor licenses are still only granted to spots whose primary purpose is as a bar or restaurant, not a retailer.

That’s a point of contention for critics of expanded alcohol sales. With some grocery stores in the Loblaws chain already allowed to sell beer and wine, LCBO workers worry it could expand to other big chain grocery stores.

“The Walmarts, the Loblaws [will] somehow find a loophole to sell alcohol in… box stores or supermarkets,” OPSEU Local 5110 local president Debbie McGuinness predicted to NOW at the end of 2020. “Those profits will go to the Westons.”

Last year, after that conversation, convenience store chain 7-Eleven submitted an application to introduce in-store alcohol service at 61 stores throughout Ontario, which OPSEU called a “loophole.” CBC later reported that Ontario premier Doug Ford had a secret meeting at 7-Eleven’s Texas headquarters just before the pandemic.

Since then, the Convenience Industry Council of Ontario also launched a campaign to allow convenience stores to sell made-in-Ontario beers and wines.

In the meantime, though, Morana says local bars and restaurants are not looking to weaken the LCBO, whose sales fund social services and infrastructure throughout the province. Instead, he looks at licensees not as competitors but as “partners” whose sales help, not hinder, the government agency, which still taxes every sale even if a product – a personally imported bottle of beer or wine, for instance – is special ordered from a third-party.

For many of the more successful bottle shops, what they’re offering is different from what the LCBO is offering. Some are like neighbourhood bodegas or grocery stores where you can buy a bottle of mustard or jam along with a bottle of wine. Others are specialty shops, offering a selection of beers and wines you would have trouble finding at the LCBO.

Both Grape Crush and Grape Witches specialize in natural wines, which have been increasing in popularity throughout the city over the last few years but are often hard to get through the LCBO or Wine Rack.

Grape Witches general manager Lorein Codiamat is a veteran of restaurants like Grey Gardens, Cocktail Bar and Harbord Room, all spots known for their drink programs.

“Before bottle shops, there were a lot of amazing wines you could only ever experience at a restaurant,” she recalls. “That meant that these wines became exclusive and limited, with only certain people able to experience them. And that meant there were broad expressions of wine that were never entering the market because only a select few were enjoying it.”

Grape Crush, similarly, started as a tasting series at SoSo Food Club before the pandemic and then took over the restaurant entirely.

“After the events, people would be able to purchase bottles of wine directly from agencies,” Chen says on Grape Crush’s origins. “We always wanted to give people access to the incredible wines only restaurants are able to get. Now we can do that in a more accessible way.”

The liquor discount means spots like Grape Crush and Grape Witches can offer a selection of natural wines under $25, which before the pandemic might have seemed unthinkable. And there’s more variety than ever.

Codiamat says it’s let them lower the price point for the cheapest bottle from $24 to between $20-$22. Still, that’s a pricier than the LCBO, where $20-$22 is more than mid-level than the lowest tier. So even with the discount, one of the barriers to a thriving bottle shop culture is education and time. People have to become more comfortable shopping at them and learning why things cost what they do.

For Grape Witches, demystification and education are a big part of their mission anyway. They want people to think about the wines they consume – not just the taste and flavour profile, but where they come from, the way they were farmed, and the environmental and human impacts of climate change.

And part of that mission is paying a living wage, too. Part of OPSEU’s backdoor privatization argument is that liquor sales labour could move from good, unionized jobs to the privatized bar and restaurant industry, which has historically been very bad when it comes to labour. There is some hope that as well as passing the discount onto the customer, the pricing changes could also be passed onto workers.

Chen and Morana look at their staff as skilled workers dealing with a specialized trade and pay them as such, while Grape Witches is actually a certified living wage employer through the Ontario Living Wage Network. That means even with the eliminated subminimum wage for tipped employees, they pay everyone at least $22.08, which is the living wage in Toronto, rather than the substandard $15 minimum.

“The way capitalism works is people often don’t actually understand how much things cost,” Codiamat says. “We want to be really transparent about all the factors that go into a good bottle of wine, including the costs, which includes the human costs.”

“That’s one of the things that also needs to change across the industry.”