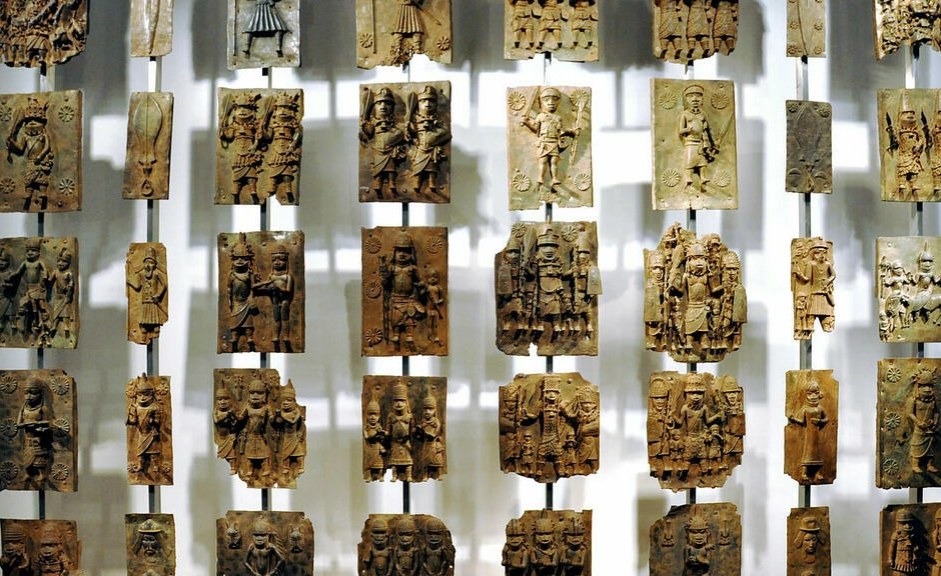 In his book Blood and Bronze: the British Empire and the Sack of Benin, historian Paddy Docherty reveals the brutality of high-ranking British officials in destroying the Kingdom of Benin in 1897. Justified by Whitehall at the time, the wrongdoings would now be considered crimes against humanity.

“To understand the way the Kingdom of Benin came to be destroyed and plundered by the British Empire, I felt it was necessary to really understand the context of why Britain was in West Africa in those days,” says Paddy Docherty, a historian of empire.

The whole focus of the British Empire in West Africa during the mid-to-late 19th century was procuring palm oil, which many former slavers switched to overnight after the abolition of slavery. Other European empires were muscling in on the territory, which pushed the British to go inland.

This move, and the way it was done, upset the palm oil trade in what is today called Nigeria, cutting out the Nigerian middlemen.

Using British Foreign Office archive documents, among other evidence cited at the back of the book, Docherty carefully reconstructs the turn of events which eventually led to the sack of the Kingdom of Benin.

From 1889 to 1891, the British put George Annesley in place as the British Consul. In this position, he governed the area and dealt with the kingdoms that were well-established there.

Annesley’s everyday brutality did not go unrecognised back home. After receiving reports that soldiers gang raped a woman named Ekang, and that Annesley held her down while they carried out their crimes, an investigation was carried out.

Lord Salisbury, both British prime minister and the foreign secretary at the time, had received a letter from Sierra Leonean clerk George Turner, who witnessed the brutality.

“When London finds out about this, instead of embarking on a prosecution of Annesley, which one would imagine, given the weight of evidence against him, they decide to quietly retire him on a pension, to avoid any loss of reputation to the British Empire,” says Docherty.

In a brief note found in the file of the gang rape investigation, the prime minister’s private secretary wrote that Annesley’s wrongdoings in Oil Rivers state were very bad and getting out to the public.

Lord Salisbury wrote an “S”, noting that he read the file and then added a very brief comment at the bottom of the note, “very bad indeed”.

The papers in the British national archives show that Britain was “trying to do things on the cheap” in the colonies, as decision-making was always about keeping costs down, says Docherty.

“The way the Benin Punitive Expedition was presented is often as if it was an almost justifiable response to the killing of a number of British officers in January of 1897,” he explains.

“Things were often very haphazard, and makeshift,” he says, pointing to the sack and destruction of the Benin Kingdom. “British officials were often floundering around, trying to do something in areas that they simply didn’t understand.”

Docherty found two British maps in the archives showing West Africa, both offering a rough idea of where Benin City, the site of the Kingdom of Benin, was located.

“They were about 200 miles apart. It seems absolutely farcical,” he says.

In order to take over the kingdom and its defiant Oba (King)Ovonramwen, the Benin Punitive Expedition brought Admiral Harry Rawson, based in Cape Town, South Africa, 2500 nautical miles (2900 miles) up the west coast of the continent to the coast off Benin City.

“It seems like a comic novel, but it’s actually true that Admiral Rawson set off to destroy Benin City, without actually knowing where it was,” says Docherty.

The kingdom was eventually found, and so were its beautiful bronze artworks, many of which are now in the British Museum, as a result of the expedition. Today, they are considered contested objects that Nigerian officials have repeatedly asked the British to return.

The ‘punitive’ in the Benin Punitive Expedition comes from the death of James R. Phillips, a British deputy commissioner who was killed, along with his party, after local advisors sent by the Oba of Benin told him to wait before seeking an audience with the king.

In order to understand what sort of man Philips was, Docherty dug into an obituary written in the magazine of his alma mater, Uppingham School, a boarding school in the north of England.

He “died gloriously, in their view, on the frontiers of empire”, says Docherty, so they tried to memorialize him. But the actual obituary hones in on his enthusiasm, and that he is a sportsman; nothing about his intelligence or talents.

“The picture they accidentally conjure is of a very stupid, very enthusiastic man who prizes actions above thought and is just the kind of person to create a crisis to blunder into something he really doesn’t understand,” says Docherty.

He adds that it was this and Phillips’ arrogance that led to his death, which would have been prevented if he had listened to the king’s advisors.

Understanding this history becomes even more valuable today, because choices made in the 21st century perhaps would not have been made, such as Brexit, if Britain was not so detached from the reality of its imperial, colonial past, contends Docherty.

“We haven’t really been forced into a reckoning with our imperial legacy, and we have largely overlooked our brutal history of colonialism around the world because it is more convenient and financially advantageous to ignore it,” he writes in Blood and Bronze.

By speaking of the ‘glory days’ of empire, Brexit campaigners tapped into this nostalgia, he says.

“Quite frankly, if we had had a much more realistic understanding of our past and of the realities of the British empire, Brexit would have been an impossibility. We wouldn’t be hankering after this mythical past. We would be doing our best to undo it.”