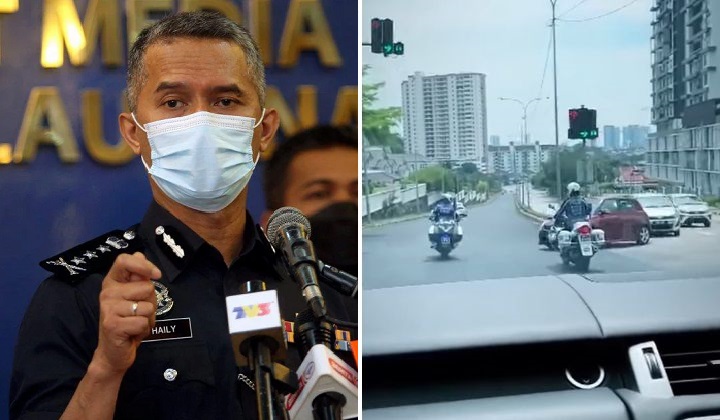 There was no direction given to the two traffic policemen to escort a private car driven by a VIP son, in an incident that was caught on video and had since been viral.

Penang Police Chief Datuk Mohd Shuhaily Mohd Zain said that the duo, acted on their own to act as the VIP’s son outrider.

“I just want to make it clear that (in this particular case) there were no instructions whatsoever from any senior officers for the duo to escort the public vehicle. I hope this issue will not be turned into a polemic.

“We have opened a disciplinary investigation paper against the two traffic policemen.

“For now, they have been transferred to the administrative department until the investigation is completed,” Mohd Shuhaily was quoted by the New Straits Times.

He also regrets that the procedures to carry out traffic control duties were still flaunted despite it being already spelled out clearly by the Bukit Aman Traffic and Public Order Department.

Meanwhile, the driver that was escorted by the traffic policemen had been contacted by the police to assist in the investigation.

The son of a member of parliament, in his mid-20s, has agreed to give full cooperation, said Mohd Shuhaily.

The case is being investigated under Section 233 of the Malaysian Communications and Multimedia Commission Act 1998.

“We want to see if there are any elements to tarnish the image of the police force,” he added.