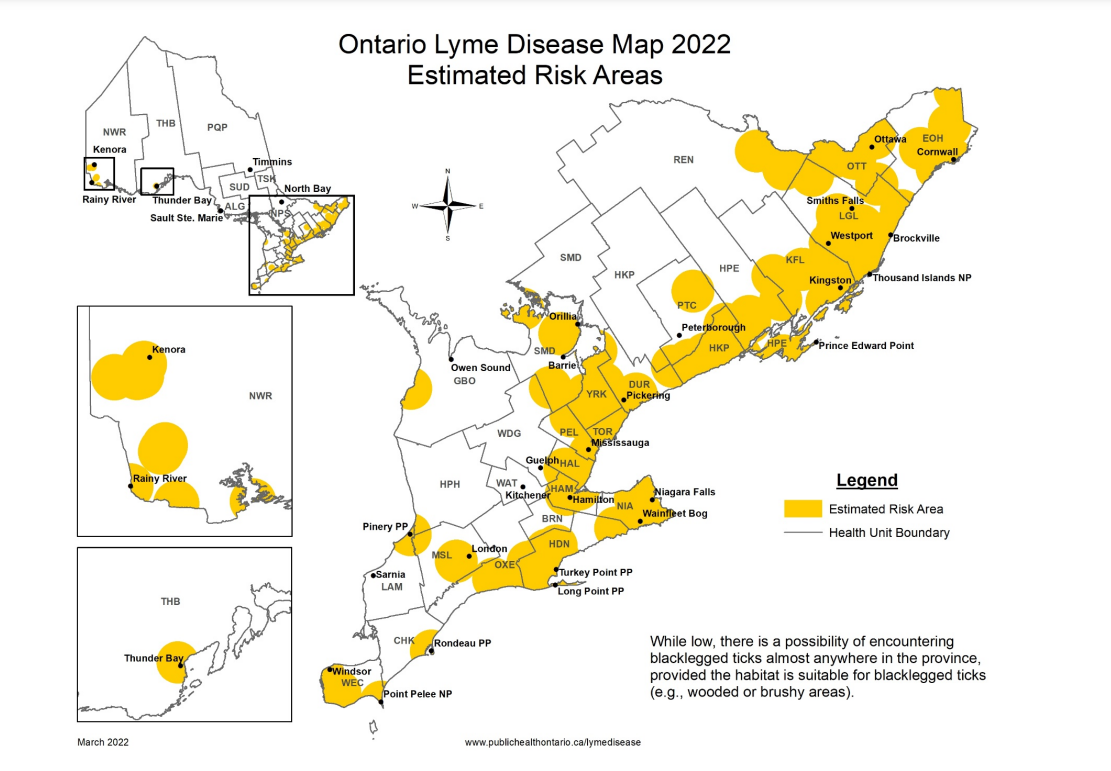 It’s tick season, and because of that, Public Health Ontario has published a map demonstrating the estimated highest risk areas for Lyme disease provincewide.

The map shows estimated risk areas when assessing potential exposures to black-legged ticks. Health officials note that it is crucial to acknowledge that these ticks feed on and are transported by migratory birds.

That means there is a possibility of encountering an infected black-legged tick almost anywhere in Ontario.

Ticks, specifically black-legged ticks, are most active in the spring and summer months but can be found at any time when the temperature is above freezing.

Toronto and most of the GTA are considered risk areas as black-legged ticks continue to spread to new regions of the province driven by climate change.

“Estimated risk areas are calculated as a 20 km radius from the centre of a location where black-legged ticks were found through drag sampling,” Public Health Ontario said.

Health officials note that not all black-legged ticks carry Lyme disease, and not everyone bitten by an infected tick will develop signs and symptoms. The risk of contracting a tick is higher if you live, work in, or visit a wooded area/an area with tall grasses and bushes.

While most tick bites are harmless, contracting Lyme disease can be severe. If untreated, it can attack the heart and nervous system. Most Lyme disease symptoms in humans usually appear between three and 30 days after an infected black-legged tick bite.

Clinicians urge people to wear long-sleeved clothing and long pants if travelling in high-risk areas. Insect repellent is encouraged, as is putting clothes in the dryer when possible.

High tick risk for dogs and pets: What to look for

In March, Veterinary Practice News in the U.S. published a report saying Lyme, and other vector-borne diseases, are expected to pose higher-than-average risk this year.

Health Canada says to check your pets for ticks after being outdoors. Ticks most often attach to dogs’ and cats’ heads, necks, and ears. Signs of Lyme disease are more difficult to detect in animals than in people, as rashes do not typically develop.

VCA Canada says affected dogs have been described as if they were walking on eggshells, with some pets not showing symptoms until a year after being infected.

“Dogs with lameness, swollen joints, and fever are suspected of having Lyme disease,” VCA Canada says online. “There are a few blood tests that may be used for confirmation. The first is an antibody test that your veterinarian can perform using a special test kit.”

VCA Canada recommends testing a pet no earlier than four weeks after a tick bite, which can be treated with antibiotics.

“Ticks are found in grassy, wooded, and sandy areas. They find their way onto an animal by climbing to the top of a leaf, blade of grass, or short trees, especially cedar trees.”

Talk with a veterinarian about tick-prevention products for pets and Lyme disease vaccines for dogs.

Removing a tick is the same for humans and animals, Public Health Ontario says, adding that it’s essential not to crush or damage the tick because it could cause Lyme bacteria to pass into your bloodstream.

Officials suggest using fine tweezers and grasping the tick as close to the skin. Pull straight up and do not jerk, wiggle or twist the tweezers.

Contact your local public health unit or health care professional if you have been somewhere where ticks might live and experience symptoms, including rash (a bull’s eye rash), a bruise-like rash, fever, chills and headache associated with a bite.