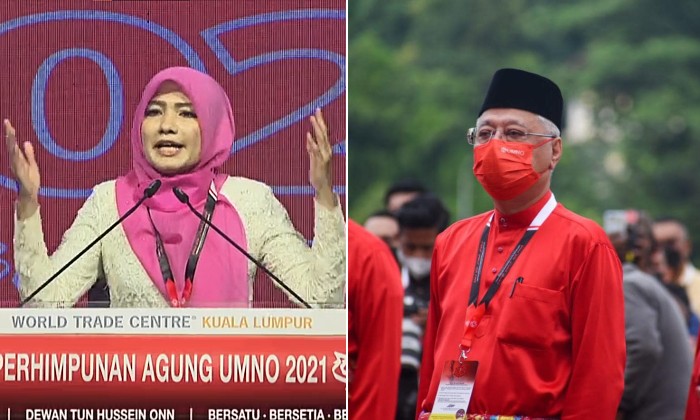 It seems that the Puteri UMNO youth wing has a bone to pick with the party’s leadership.

The 26-second clip had the chief addressing a hall full of Puteri UMNO members who appeared to have their spirits erected by her fiery sermon before an awkward silence ensued at the end.

Ketua Puteri UMNO legit just said Puteri is more manly than man and I quote verbatim
“Our balls is bigger than yours”.

Is this what it has come to 🤣🤣🤣 I skek pic.twitter.com/BRsopPzskW

Fresh off the party’s victory during the Johor state election, Zahida or “Kak Ida” as she calls herself, explained that if they can regain their strength and position there then they can do the same across the nation.

Which is why, before this tonic’s potency goes limp, I answer the call made by (our) deputy president (Datuk Seri Mohamad Hasan) in his inaugural address yesterday for the government led by our vice president, Datuk Seri Ismail Sabri Yaakob, in taking steps to expedite the dissolution of the parliament to enable GE15 to be held.

In her speech, Kak Ida said that they were ready to accelerate to the finish, achieve absolute victory and redeem the dignity they lost during GE14.

Don’t dampen or spirits, we want to continue sprinting. Don’t say that we are young women, weak princesses. In fact, we can be more masculine than some males. Our balls can be bigger than yours.

She also shared that a friend had told her that, if there were those within the party who are afraid to face their opposition, then it was best to just remove their manhoods.

A friend said if anyone is scared to face other parties that insult us this time, it’s better to just cut their manhood and toss it away into the crocodile park in Johor.

You can read her full speech, HERE.

While some considered the snippet from the speech inspiring, others also claimed that it was insulting.

This is the kind of energy we all need. https://t.co/Ag8TQA2Nm6

However, there were those who stepped up to say that there was nothing wrong with women being brazen.

No idea what she was referencing, but the QTs and replies saying that women should be feminine, demure, and “lemah lembut” are nonsense.

Women can say whatever they want. Men don’t get policed for their speech.

And what she said isn’t sexual harassment either. https://t.co/2ZkmOTlkpb

Meanwhile, some took the opportunity to just make jokes about the thing instead.

Will @MyJAKIM wanna check their private parts like they did with Sajat? 🤔😅 https://t.co/u0f3LhIJ45

If one ball is much bigger than the other, please see a doctor. https://t.co/ErZexPIfM5

Typing out trending topics and walking the fine line between deep and dumb.