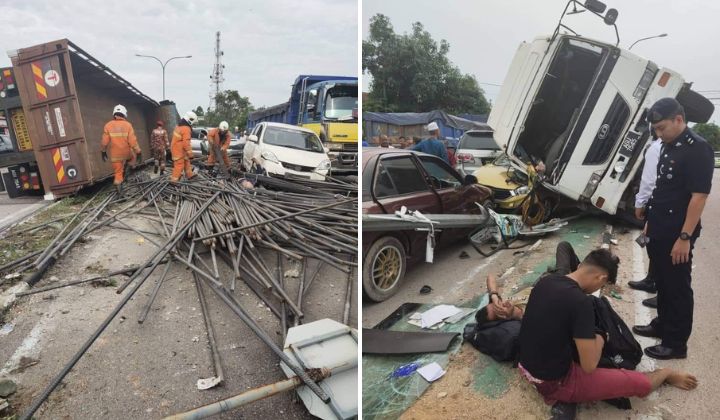 A lorry carrying metal rods that overturned at Jalan Kamunting in Pasir Puteh, Kelantan, today morning killed a woman and injured a baby and four others.

It’s believed that the lorry sped up at the corner of the traffic light and that caused the large vehicle to fall sideways.

Harian Metro reported that the metal rods from the overturned lorry landed on a few vehicles – an SUV, two lorries, three cars, two motorcycles and 21 bicycles.

Pasir Puteh Fire and Rescue Station chief Azhar Elmi Mustofar said 13 firefighters from the Pasir Puteh and Tok Bali fire and rescue stations rushed over to the scene to help the victims.

According to mstar, the deceased was a woman in her 30s who was riding a motorcycle while her 10-year-old son lost his right leg. The other three victims were lightly injured.

All victims were sent to the Tengku Anis Hospital in Pasir Puteh for treatment.

Pictures shared on social media showed some victims trapped under the metal rods with some members of the public trying to get them out.

The cleaning-up work of the accident site was completed at 11am on the same day, Bernama reported.