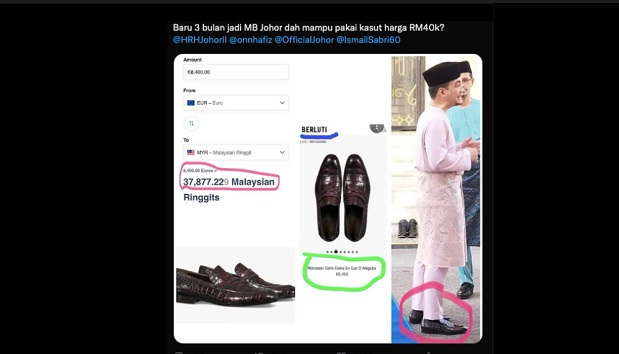 Auction off ‘royal’ shoes, use proceeds to help public, group says The Centre to Combat Corruption and Cronyism (C4) yesterday called on Johor Menteri Besar Onn Hafiz Ghazi to auction off the pair of shoes he received from Johor’s Sultan Ibrahim Sultan Iskandar and use the proceeds to help the public. This comes after Onn Hafiz’s admission that he did not buy the shoes, which came under public scrutiny recently, but that he received them from the ruler as a gift. C4 executive director Cynthia Gabriel said gift-giving enables corruption, especially when there is no asset declaration law in the state. “As such, (an) asset declaration law is crucial to drive transparency and accountability into governance and drive out any suspicion of quid pro quo (where) ‘I scratch your back and you scratch mine’, and where loyalty is bought through inappropriate gifts and rewards… what more from the royalty,” she said. Cynthia said any individual who is in a position of power must exercise “the highest levels” of integrity and diligence in rejecting such rewards and gifts given to them. Thus, she added, C4 calls upon the Johor Legislative Assembly to enact a law that requires all its members to […]