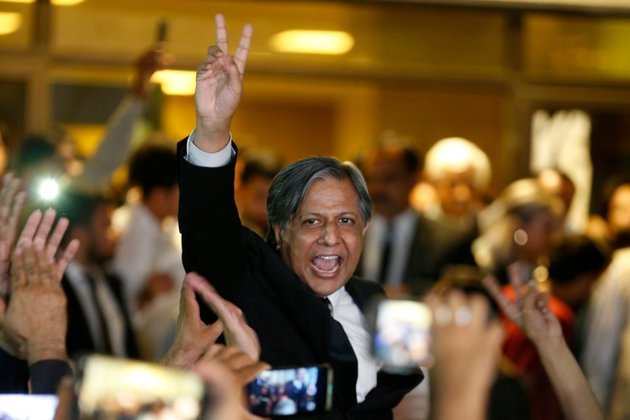 Islamabad – Pakistan’s Supreme Court on Thursday set aside a ruling by the deputy speaker of the national parliament that had blocked an opposition-led vote of no confidence against Prime Minister Imran Khan.

The controversial house ruling on Sunday led to the dissolution of the National Assembly, the lower house of parliament, by President Arif Alvi, acting on Khan’s advice. The president had also called for fresh elections in 90 days and appointed Khan as the interim chief executive after the prime minister dissolved his Cabinet.

The five-judge panel of the top court led by Chief Justice of Pakistan Umar Ata Bandial, however, unanimously declared as unconstitutional all the steps stemming from the deputy speaker’s ruling, which had outlawed the no-confidence vote as having been sponsored by a ‘foreign power.’

The short judicial order Thursday declared the ruling ‘to be contrary to the Constitution and the law and of no legal effect, and the same are hereby set aside.’ It went on to say that ‘the advice tendered by the Prime Minister … to the President to dissolve the Assembly was contrary to the Constitution and of no legal effect.’

The verdict also restored Khan as the prime minister and his Cabinet as well, ordering the session of the National Assembly to reconvene Saturday morning to reorganize the vote of no confidence to determine the fate of the embattled prime minister. It added that if the no-confidence resolution ‘is successful then the assembly shall forthwith, and in its present session, proceed to elect a Prime Minister.’

Khan had lost the majority in the 342-member house in the run-up to Sunday’s no-confidence vote after lawmakers from his ruling party defected and main coalition partners switched sides and joined the opposition.

The 69-year-old former cricket star’s Pakistan Tehreek-e-Insaf party, or PTI, won the most seats in the 2018 election, but it did not get a majority, forcing Khan to form a coalition government.

Khan has repeatedly alleged that the United States conspired with the opposition to topple his government to punish him for his recent visit to Russia and for not supporting the West in condemning President Vladimir Putin’s war on Ukraine.

Paramilitary soldiers stand guard at the premises of the Supreme Court of Pakistan in Islamabad, Pakistan, April 7, 2022.

Pakistani opposition leaders have ridiculed the charges, and Washington has vehemently rejected them.

‘There is absolutely no truth to the allegations,’ State Department spokesman Ned Price reiterated to reporters Monday when asked if the U.S. was behind an effort to oust Khan.

‘We do not support one political party over another. We support the broader principles, the principles of rule of law, of equal justice under the law,’ Price added.

Khan’s attorneys had defended his actions as being in line with the constitution during their arguments before the Supreme Court.

Opposition leaders and rights activists declared the outcome of the legal proceedings as a landmark judgment. ‘It is not political parties or parliament that won or lost. The constitution retained its supremacy,’ said Tahira Abdullah, an Islamabad-based civil society activist.

Pakistan’s powerful military distanced itself from the political crisis stemming from Sunday’s controversial proceedings in parliament.

The nuclear-armed South Asia nation has experienced three military coups since its founding 75 years ago, leading to prolonged dictatorial rules. Mainstream political parties admit that generals continue to influence democratically elected governments in policymaking matters when not in power.

Analysts blame direct and indirect military interventions for the fragility of democracy in a country where no elected prime minister ever has served out a full five-year term.

‘After its euphoria subsides, and assuming it wins the no-confidence vote, the current opposition won’t have it easy,’ said Michael Kugelman, an expert on South Asia affairs at the Washington-based Wilson Center, while commenting on the court verdict.

‘It will face an economic mess, and it will be hounded relentlessly by an angry PTI in opposition. Can’t rule out the possibility of early elections down the road,’ Kugelman added.

Even if Khan loses the no-confidence vote, his party will remain the largest political force, with at least 135 seats in the legislative assembly.

Pakistan’s opposition leader Shehbaz Sharif speaks during a press conference with other party leaders in Islamabad, April 7, 2022, after a Supreme Court verdict.

The united opposition already has announced that Shehbaz Sharif, the leader of the parliamentary opposition and head of the Pakistan Muslim League-Nawaz (PML-N), will be their candidate for prime minister. The PML-N, with 83 seats, is the second-biggest party in the assembly, followed by the Pakistani Peoples Party, with 53 seats.

Khan has called Cabinet and parliamentary party meetings on Friday following the court ruling, saying he will also address the nation later in the day. ‘My message to our nation is I have always & will continue to fight for Pak till the last ball,’ the embattled Pakistani leader wrote on Twitter.

PPP leader Bilawal Bhutto Zardari hailed the verdict as a ‘victory for democracy and the constitution.’