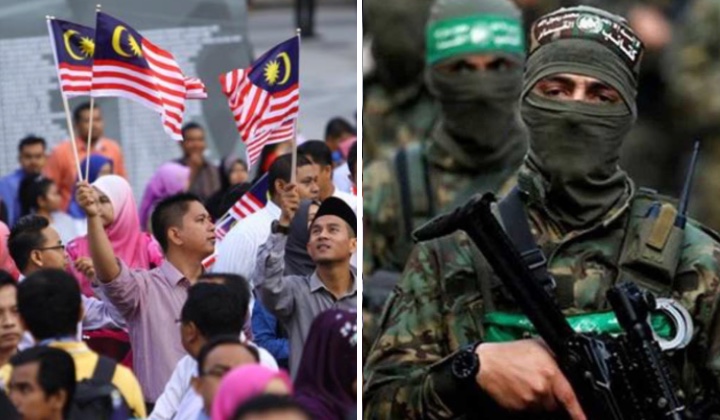 Hamas, the Palestinian Sunni-Islamic fundamentalist, militant, and nationalist organization is looking at setting up its external operations base here in Malaysia.

According to international foreign affairs reports, Hamas is being forced to move from its base in Turkey due to the country’s warming ties with Israel, the arch-enemy of Hamas.

Hamas eyes Malaysia as a possible operations base https://t.co/eVvljJayuG

Malaysia is seen as a potential base because the group has nowhere else to go in the Middle East.

The country is geographically and culturally more distant from any Arab country, but this could be offset by the popular support enjoyed by Hamas.

Malaysia sees Hamas as freedom fighters that deliver social welfare programmes, rather than militants as reported by Western media.

On May 13, Communications and Multimedia Minister Saifuddin Abdullah orders internal investigation into RTM Mandarin for labelling Hamas as ‘militants’. https://t.co/SEtwTLJjbU

Should Malaysia Get More Involved?

Malaysia is a strategic ally of the United States in the war against terrorism (like Turkey and Qatar) even though it publicly supports Hamas, a designated terrorist organization by the US.

The former Special Advisor to Johor Menteri Besar and Minister of Higher Education said it is a problem that needed strong Arab nations’ political support for political resolutions.

While Malaysia and other nations are supportive of Hamas and Fatah, it must be seen in the context of supporting resistance against occupation of the Palestinian land, not supporting a terrorist movement or any such organisation.

He stressed that Malaysia’s support has always been humanitarian and political but never about armed struggle.

On the other hand, Hamas’s political network is global in many ways and means.

Dr Abdul Razak, who heads a political think tank in Kuala Lumpur, said it is not strategic for Hamas to have one specific location for their operation and presence.

Thus while Hamas may have some presence in Malaysia, it is more of an outreach establishment for the Palestinian cause and public relation office rather that a Hamas Political and operational office

Dr Abdul Razak Ahmad on the nature of Hamas’s activities in Malaysia.

He added that Malaysia has the necessary sophistication to regulate every foreign-related establishment under its legal framework.

Bloodshed Spilling Over In Malaysia

Fadi Mohammad al-Batsh was a Palestinian engineer, academic and member of Hamas.

He was assassinated on 21 April 2018 in Kuala Lumpur, Malaysia, while heading to a mosque for dawn prayers

Fadi was involved in Hamas rocket and drone development, and the killing was widely blamed on Israel.

let’s not forget this happened on our soil a few years back..

“The family of Fadi al-Batsh, 35, has accused Israel’s spy agency Mossad of being behind his killing on Saturday.”

The murder suspects were never caught, but in January this year, Hamas said they had arrested a Gaza Palestinian.

The man was alleged to have collaborated with the Israeli Mossad spy agency in the killing of Fadi.

In recent years, the #ShinBet has uncovered a large number of cases in which #Hamas terrorists have been trained in #Malaysia and received regular military training. https://t.co/cmpSay2H9w

Malaysia has dismissed the claims as ridiculous allegations.