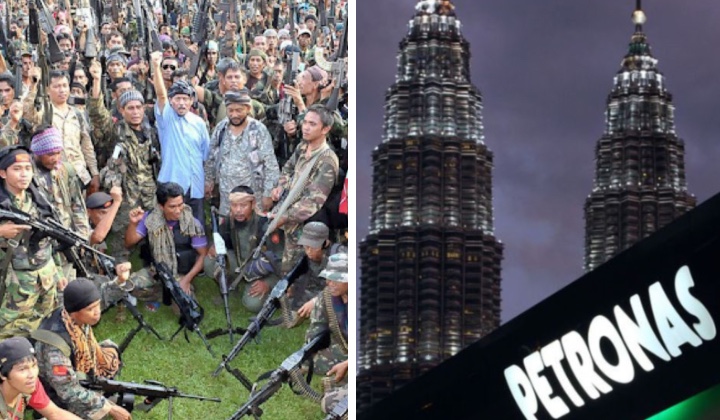 The heirs of the Sulu sultanate seized the assets of two Petronas subsidiaries in Azerbaijan.

The Sulus are said to be demanding USD14.92 billion (RM62.59 billion) from Malaysia, according to a Financial Times report.

Lawyers for the plaintiffs reportedly seized the assets of PETRONAS registered in Luxembourg, Petronas Azerbaijan (Shah Deniz) and Petronas South Caucasus, with a reported value of more than USD2 billion (RM8.87 billion).

The lawyer said the bailiffs in Luxembourg seized the holding company on behalf of their clients.

The move was part of a lawsuit filed in 2017 by Sulu heirs to seek compensation for land in Sabah that their ancestors allegedly leased to a British trading company in 1878.

Meanwhile, netizens are already fuming as the nation appeared to have been caught off guard, with seemingly no response from the government.

In March, arbitrators in France ruled that Malaysia, which inherited the obligations of the lease agreement when it gained independence from Britain, must pay the heirs USD14.92 billion (then RM62 billion).

The last descendant of the Sultan of Sulu, Sultan Jamalul Kiram II, demanded a tremendous amount of compensation from Malaysia following the arbitration process.

In March, Minister in the Prime Minister’s Department (Parliament and Law), Datuk Seri Wan Junaidi Tuanku Jaafar, was reported to have said that the decision was invalid because it was not based on the law.

He said the decision set by the arbitrator, Dr Gondoza Stampa, had been overturned and was no longer legal.

On 28 February, the Spanish news agency reported that Dr Stampa, also the Spanish arbitrator, ordered Malaysia to pay compensation to those claiming to be the heirs of the Sultan of Sulu.

The government had reiterated that it would stand firm on the claims made by Sultan Jamalul Kiram II and his heirs.

This was not the first time that the Sulus – who once ruled over many of the islands of the Sulu Sea northeast of Sabah – had tried to take something from Malaysia.

The Lahad Datu incident left a black history for Malaysia when many national heroes fell defending the country’s sovereignty from being invaded by Sulu terrorists in 2013.

The aggression tragedy was linked to a diplomatic incident between Malaysia and the Philippines shortly after 235 partially armed Filipino terrorists landed in Kampung Tanduo in Lahad Datu, Sabah, on 11 February 2013.

The group calling themselves the ‘Royal Soldiers of the Sultanate of Sulu and North Borneo’ was sent by Jamalul Kiram III, one of the parties claiming the throne of the Sulu and claiming himself to be the Sultan of Sulu.

This guy right here is the Real Sulu descendant and leader but he didn’t launch the attack.

Jamalul Karim III and his son Azzimudie Karim has already died in 2013 who caused the Lahad Datu Invasion, both are frauds who trying to claim the Sultanate Sulu throne pic.twitter.com/y4EFOY6ua9

Agbimuddin Kiram’s ‘Raja Muda’ force, the brother of ‘Sultan Sulu’ Jamalul Kiram III, invaded Sabah on the pretext of wanting to claim Sabah back as the territory of the Sulu Sultanate.

A group of local fishermen detected the presence of some of the terrorists on 11 February 2013.

The fishermen lodged a police report on more than 100 men dressed in military-style clothing and armed with firearms in Kampung Tandou.

The next day, the group was identified to have split into several locations, namely in the mangrove river area of ​​the village, a surau in the village and the house of Ahmad Malandi or known as Mad bon.

On 14 February 2013, the then Prime Minister, Datuk Seri Najib Razak, said the Malaysian government would do its best, including through consultations, to address the encroachment issue before evicting them from the area.

The Lahad Datu crisis came to the fore when two members of the national security forces were shot dead on 1 March.

They were killed after clashes between security forces and a small group of intruders as the group tried to break out of a police siege in Kampung Tanduo.

Following that, on 7 March 2013, Jamalul Kiram III announced a ceasefire for the Sultanate of Sulu, according to his spokesman, Abraham Idjirani.

However, Najib, who visited Lahad Datu, rejected the call for a ceasefire and wanted the terrorists to lay down their arms unconditionally.

The government also demanded that they surrender, besides announcing the formation of a particular security area covering Sabah’s east coast region from Kudat to Tawau, including Sandakan, Semporna and Lahad Datu.

The incursion resulted in 12 officers being killed and resulted in the deaths of 56 terrorists and six civilians.