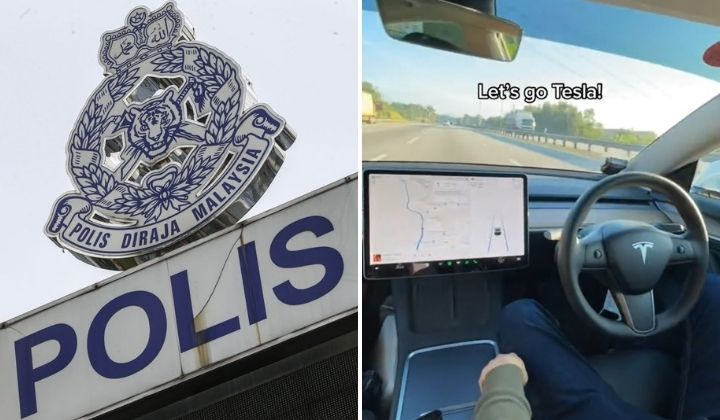 Police are set to probe a Singaporean couple @SGpikarchu for driving their Tesla on autopilot mode to Malaysia last week.

READ MORE: [Watch] Couple Travels From Singapore To Penang On Autopilot In Tesla

Bukit Aman Traffic Investigation and Enforcement Department deputy director Bakri Zainal Abidin told The Vibes that the use of a car’s autopilot function is considered an offence under Rule 17 of the Road Traffic Rules 1959.

The rule prohibits a driver from “being in a position where they do not have appropriate control over a vehicle.”

Those who are found guilty of this offence will face a penalty under Section 119 of the Road Transport Act 1987 and face a fine not exceeding RM2,000 or six months in prison for the first offence.

However, Bakri acknowledged that Malaysia has yet to formulate regulations for self-driving vehicles.

To be fair, the TikTok user did drive most of the way using autopilot with their hands on the steering wheel. This could be seen in the video although it was sped up.

They only drove hands-free at certain points of their journey to demonstrate the autopilot function.

According to paultan.org, Tesla’s own manual indicates that the driver must have their hands on the steering wheel at all times.

Bakri explained that the car’s self-driving system may cause drivers to focus on other things such as fiddling with their mobile phones instead of paying attention to the road. It’s still safer to assess the traffic and road situations manually instead of fully relying on autopilot.

He cited the accident in California in 2019, in which the driver ran a red light and hit another car while driving on Autopilot mode. The Guardian reported that two people were killed and the driver was charged with manslaughter in January.

The Autopilot feature in Tesla vehicles is helpful to drivers, but it doesn’t mean that drivers can completely take their hands off the steering wheel and mistakenly think that the system can automatically and safely control the car,” Bakri said.

Hopefully, the laws concerning self-driving vehicles will be updated soon since we do have a couple of Tesla vehicles in the country.