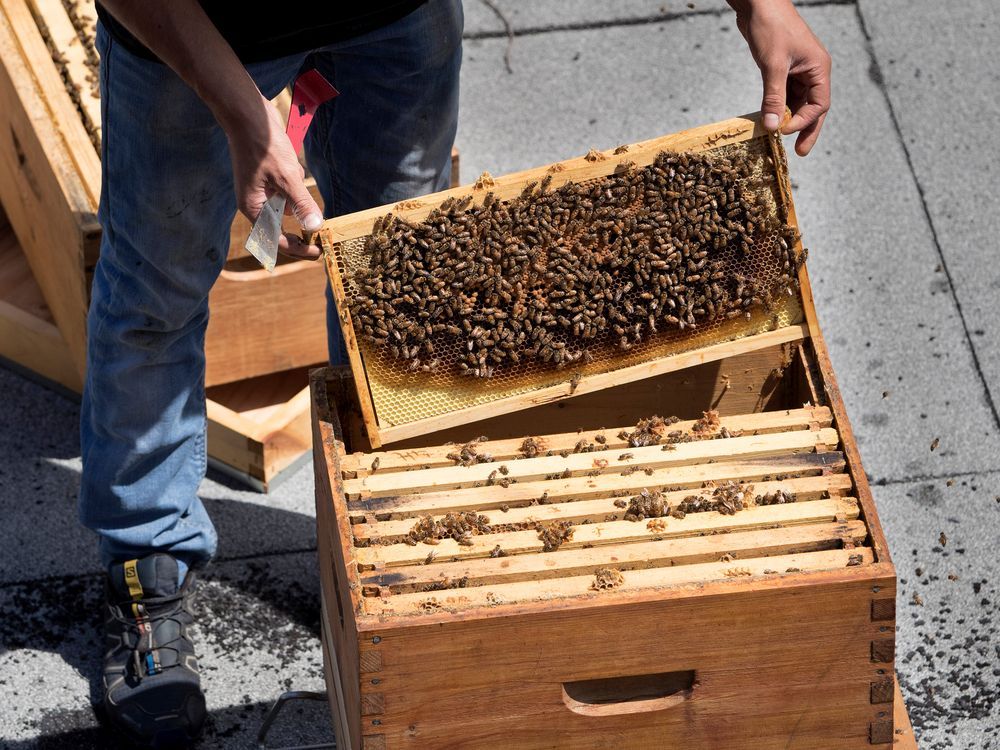 Quebec beekeepers and fruit growers who depend on bees to pollinate fields are entering spring with apprehension, fearing the bee mortality rate may be higher than usual this winter.

Pierre Giovenazzo, a bee science specialist in Université Laval’s biology department, has concerns about the 400 hives he uses as part of a research project.

“I’m worried,” he said. “I ask my staff to go check in the vault — so far it looks nice. But then, what will come out in three weeks when the snow will be gone?”

Losing bees in the springtime is a normal phenomenon in the production cycle of beekeepers. With diseases and a lack of nutrition, winter is a difficult period for the hives.

“The bees are in confinement from October, November until April,” Giovenazzo said, adding it’s hard on them. “Winter mortality in Canada hovers around 20 per cent to 30 per cent, In good years, we may be at 18 per cent.”

It will take about a month before there’s a clearer portrait of the situation in Quebec, but last summer’s weather conditions were conducive to the spread of a parasite called varroa.

“Last year, the summer was quite long,” Giovenazzo said. “Varroa is a parasite that has a cycle of about 20 days. The longer the summer, the more the number of cycles increases. At every cycle, the parasite doubles in population.”

Raphaël Vacher, president of Les Apiculteurs et Apicultrices du Québec, for his part said it’s too soon to say whether the mortality rate will be higher this year, but acknowledged his members are worried.

Testing conducted last fall suggest treatment against the disease “did not function well.”

“In our testing, we realized there was too much varroa in our hives compared to usual,” Vacher said. “In the past, when we had that problem, we always ended up with a higher mortality rate in the spring.”

In the worst years of varroa’s spread, consequences can be dramatic for beekeepers, Giovenazzo said.

“The last significant mortality in Quebec was in 2003,” he said. “I was there. The beekeepers were crying. Some of them lost 80 per cent of their hives.”

If it materializes, the excess mortality rate will come at a time when it’s more expensive to replace the bees. The disruption in the supply chain creates an inflationary effect, even for the importing of bees, which can only be done by air. It’s become an ordeal since the start of the pandemic in 2020, Vacher said. He added transportation costs have quadrupled.

The situation is causing concern among blueberry producers in Quebec, who rent nearly 30,000 hives every year to pollinate their fields.

Having a well-pollinated field can make all the difference for a grower, Pedneault said.

“We’re talking about double or triple yield for a well-pollinated blueberry field, versus a blueberry field that is not well pollinated,” he said. “There are really major impacts.”

Some businesses use the bumblebee to diversify their pollinators, but producers have little time to adjust if varroa does more damage than expected.

“The problem is that we have until the end of March to place orders for bumblebees,” Pedneault said. “The date has pretty much passed. It becomes a bit of a dice roll, seeing how many hives they think they can get us and deciding how many bumblebees to order.”

The anticipated scarcity of hives comes at a very bad time for growers, Pedneault said. With rising inflation putting pressure on input costs, optimizing harvests is even more important for growers.

Last season was bad for blueberries, but for reasons related to the weather. In the Saguenay-Lac-St-Jean region, where the vast majority of production is located, about 30 to 32 million pounds of blueberries were produced, compared with an average production of 65 to 70 million pounds in the past five to 10 years.

Many producers were hoping for a better year in 2022 to recover from a difficult one, Pedneault said.