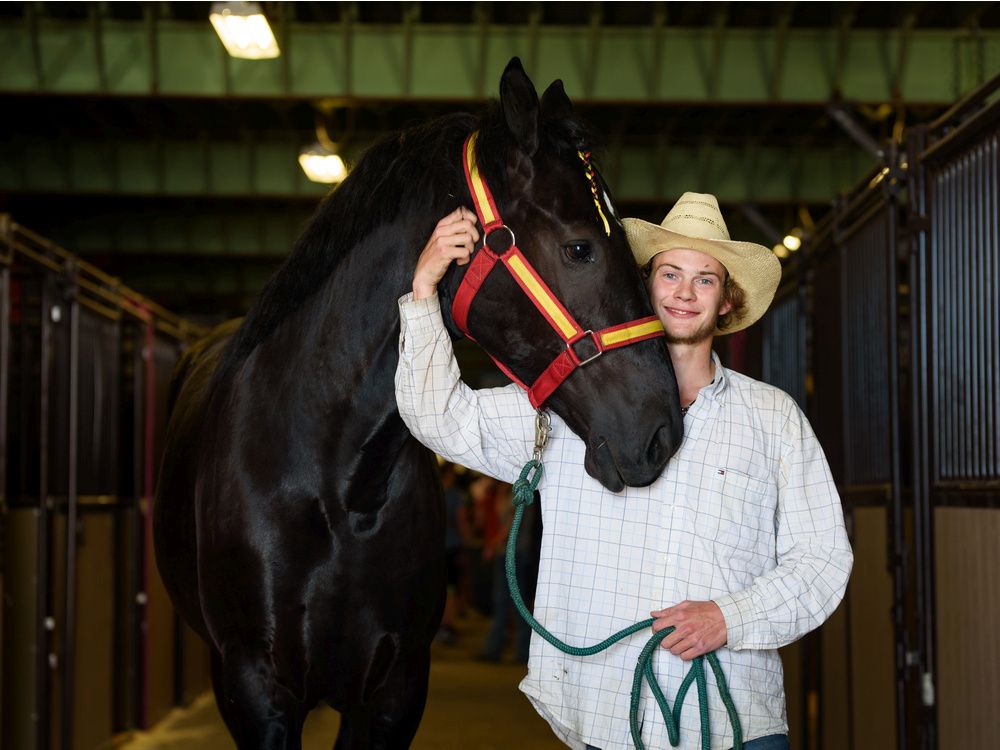 Ranchers and farmers who bring their draft horses to the Calgary Stampede say it is good to be back to normal after missing the show entirely in 2020, and a reduced event last year.

The draft horse’s place as the engine of the farm has long since been replaced by the tractor, but a dedicated few carry on the tradition of harnessing up the giant animals and putting them to work.

Travis House brought two horses to the Stampede this year from North Dakota. His day job is in excavation, but draft horses are his passion.

“Honestly, it’s my therapy at home. I get up and work my horses and get my stuff done. I enjoy being on our farm and doing chores.”

House competes in various weight classes of horse pulls. The animals are harnessed up in pairs and compete to pull loads on a sledge 14 feet. Some horses can pull up to five times their own body weight.

He said like any hobby, it can get expensive.

“I’m 15 hours away from home,” he said. “So I got my fuel expense and travel expense and all that. But not only that, there’s all the feed and hay and time that you spent with your team to get them ready to compete for an event like this as well.”

House has to condition his horses to get them ready for the pull. That involves building up their stamina by having them walk four to six miles each day to build up their leg muscles and lungs. He also gets them pulling weight to build their muscles.

He says he’s won several prizes over the years at festivals and exhibitions all over the west, including at Stampede, but it’s not about the prize money.

“The main thing is the friendships and the memories that you make from it, you know? Yeah, it’s great if things are in order and you win that day, but if not, you’re just glad to be there.”

Chance Bell, 18, represents the next generation of ranching. He comes from Lucasia Ranch at Claresholm.

He said his ranch raises a wide selection of animals, including cattle, sheep and peacocks. But when it comes to draft horses they specialize in Percherons — a breed from France.

“They were originally bred to carry the big heavy knights,” explains Bell. It’s not difficult to imagine a knight suited up and sitting atop his horse Fancy Toes.

Bell says at Stampede he competes in halter class, which involves leading a horse around the arena and showing he’s in control. He’s been competing from an early age.

“I did junior showmanship and won first place when I was 10. And then, for the Stampede’s 100th anniversary when they did old generations and new, I was the exact person they had for the next generation of Stampede.”

For much of the time, the horses are in the pens at Draft Horse Town, with endless streams of spectators walking past.

Bell says bringing the horses to a busy event like the Stampede helps accustom them to people and loud noises, like nightly fireworks.

He enjoys showing off his ranch’s horses, especially to the kids who are mesmerized by the giant animals.

“I like educating people,” says Bell. “I like random facts and teaching things, letting them play with the horse and get closer.”

Bell says in some ways, it’s getting more difficult to raise draft horses with the rising price of grain. He says his ranch has cut back the number of horses they raise to about 50.

But with the rising price of gas, the horses can save on the cost of gas when there’s work to be done.

“We have a wagon that has bale arms on it,” said Bell. “So we can go take out horses and go feed the cows with hay.”