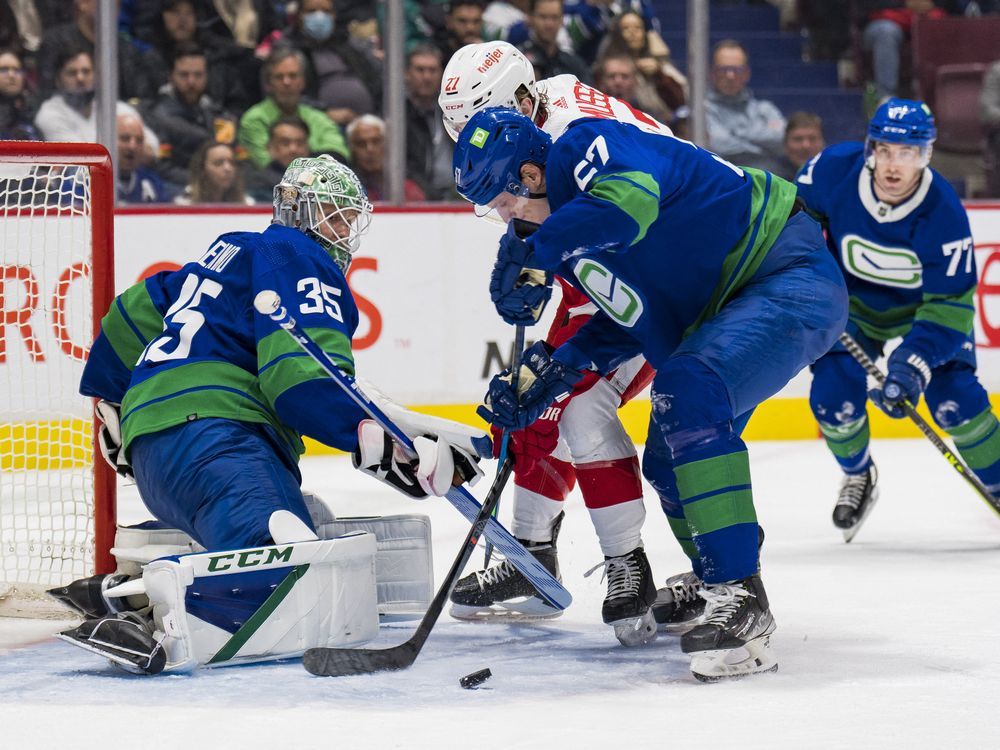 No team is going to win all its games, but when you drop must-win games to teams that are among the league’s worst defensive outfits, it really stings.

Such is the takeaway from the Vancouver Canucks’ 1-0 loss to the Detroit Red Wings on Thursday night at Rogers Arena.

The Red Wings have been woeful defensively of late, giving up more than 4.5 goals against per game over their previous 20 games.

And the Canucks’ offence has also been red-hot in that time, scoring about that many goals per game themselves of late.

So it added up that this game became a goaltenders’ duel.

Detroit goalie Alex Nedeljkovic, who has struggled for much of the season, made 42 saves on the night, many top-notch. And at the other end, Thatcher Demko was his usual elite self, giving up just one goal on 35 shots.

Detroit’s lone goal was scored by Pius Suter, just as a Red Wings penalty expired in the second period as the centre notched his 12th goal on the season. He’d been looking to pass the puck across to Vlad Namestnikov but whiffed on the play and instead the puck trickled between Demko’s legs.

Here’s what we learned…

Save of the year

Late in a first period that the Red Wings finished stronger than the home team, they were unlucky not go into the intermission with the lead.

Lucas Raymond was stopped point-blank by Demko, who reach out to his limit to knock the puck down and away.

A lesser or shorter goalie wouldn’t have had the reach or flexibility to make such a save.

He made a similarly key save late in the second, stoning Namestnikov on a breakaway, keeping the score 1-0.

Anything you can do…

At the other end of the ice, Nedeljkovic was also putting on a show, especially in the second period and made a big save on Tanner Pearson.

He made a big save late in the second on a Conor Garland breakaway, looking as calm as Demko usually is in similar situations.

No puck luck for Boeser

Brock Boeser had just two goals in 11 games coming into the night and his run of bad luck continued against Detroit in spectacular fashion.

He also had a glorious chance on a two-on-one later in the period, but the puck skipped over his stick just as he moved to collect the pass.

Most teams kill penalties using what’s known as the triangle-plus-1, where three defenders sit in the slot and the fourth penalty killer pressures the puck and tries to drive the play.

The Red Wings shifted away from that setup, moving to a traditional four-man square or diamond, which disrupted the Canucks’ power play plans simply by being positioned where the Canucks didn’t expect.

Canucks sniper Elias Pettersson had missed the last two games because of an injury. The team said it was an upper-body issue, but a source told Postmedia it was a wrist issue.

Pettersson missed 30 games last season because of a wrist injury, which he spent the summer rehabilitating.

On his return to action, he had six goals on net and he won six of 11 faceoffs.

He didn’t play in the game because of suspected groin pull, but if you were wondering why Nils Höglander was wearing Pettersson’s gloves last game, here’s why:

Canucks assistant equipment trainer Brian Hamilton added another nugget to the story on Thursday, telling Postmedia it’s also that Pettersson likes to change up his gloves, breaking in new ones all the time.

Höglander on the other hand, he added, is not a fan of breaking in new gloves, so it’s a perfect match. Once Pettersson is ready to freshen his pair, the old pair is offered over to Höglander, who otherwise would likely wear gloves until they were coming apart at the seams.

Two games on the out-of-town scoreboard had particular relevance to the Canucks’ playoff chase.

The Dallas Stars beat the Montreal Canadiens 4-3 in overtime, keeping them two points up on the Canucks and with three games in hand.

At press time, the Vegas Golden Knights, who had lost five games in a row and fallen out of a playoff spot were leading the Florida Panthers 3-2 in the third period. They came into the game up a point on the Canucks.