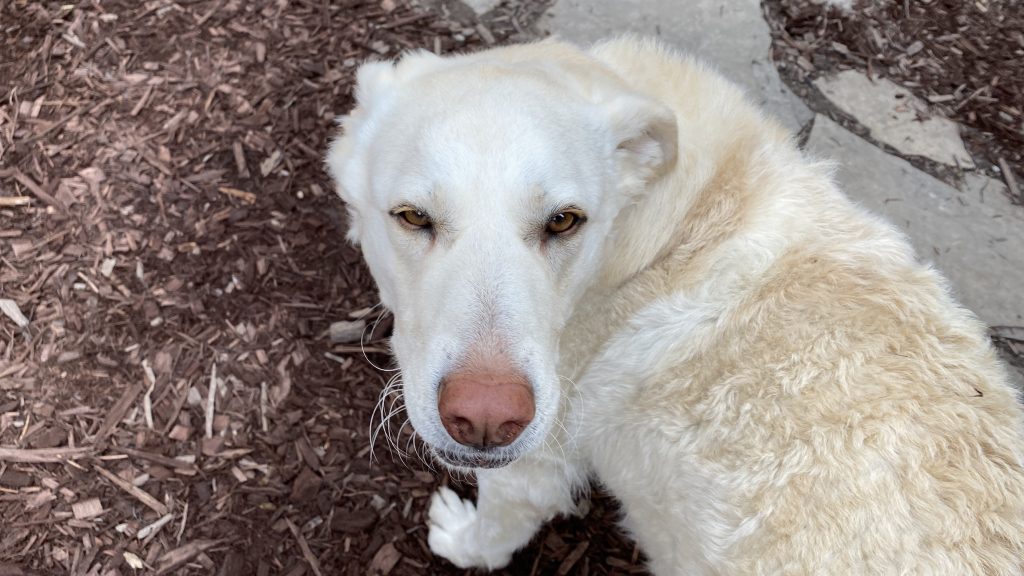 When pet photographer Holly Blair adopted her rescue dog two years ago, she wasn’t provided much information about her breed, how much growing she had left to do or what to expect in terms of demeanor and behaviour.

She was initially to foster the dog, sent to Toronto from Winnipeg via K9 Advocates Manitoba in partnership with Fetch and Releash in the Greater Toronto Area.

But when Holly met her foster dog Dolly, she says she fell in love almost instantly — not only were their names already in sync, but they were both originally from the Winnipeg area.

“I had a little girl ask me if she was available because she was wearing an ‘adopt me’ leash and I lied and said ‘no’ and so that’s when I knew that I probably wanted to keep her for myself,” Holly tells CityNews. “So then instead of a foster, I adopted her and we became Holly and Dolly together.”

Dolly before she met Holly

Few details were known about Dolly’s lineage or her life before Holly adopted her, apart from the fact that she was rescued from a northern reserve and spayed at a local clinic.

“They didn’t know anything. She was just like a question mark; I had no idea when she arrived,” said Holly. “I had to figure everything out as we went along.”

Despite the lack of information, Holly says it was obvious the dog had just recently given birth.

“You could tell that she had the [maternal] instincts and she didn’t have an outlet for them,” explained Holly. “She would run up to any puppy we saw and frantically smell them and then she would lose interest like ‘oh you’re not mine.’”

Holly says Dolly’s maternal behaviours continued for about a month after she adopted her, so she could tell she had been separated from her puppies too soon.

“This one night in particular, I went out and I had a bowl of mangoes that was on the table in the kitchen, and I came home and she had taken each mango one by one and put it somewhere soft and safe,” said Holly. “She clearly was missing her puppies and worried about them and had the instincts to want to take care of them but she didn’t have any puppies to do it with — it was heartbreaking.”

Since there was so little information about Dolly to begin with, the fate of her puppies was also unknown.

Holly says she was interested in getting a DNA test for Dolly so she could understand her needs and care for her better.

“I’m very interested in dog psychology and their personalities and how to best help them … I do think that breed plays a part in that,” she said.

Using a test kit from Embark, Holly found out that Dolly is 43 per cent German Shepherd, 31 per cent Great Pyrenees and has some Norwegian Elkhound and Siberian Husky in her ancestry as well.

Embark founder Ryan Boyko says determining a dog’s breed can be helpful when it comes to training and how best to help them thrive.

“Sometimes it’s just as simple as explaining and helping somebody accept their dog for who they are,” he said. “But also it’s being able to point people towards resources that might help prevent some [destructive] behaviors.”

Ryan cites the example of a family who found out their dog was half Australian cattle dog.

“They had no idea and so they started looking around and there was a farm just a few miles from this person’s house that trained those cattle dogs and shepherding dogs. They started to take the dog there twice a week and they said all the destructive behavior stopped,” he said.

He adds that Embark also checks for possible health issues that owners can watch for.

“We do health testing for over 210 health conditions that can directly impact dogs and the most common ones, there’s actually things that owners and veterinarians can do to either prevent or delay or somehow make better,” he explained.

Holly says she found it very helpful to know that Dolly was part German Shepherd, so she can watch for hip dysplasia in the future, which the breed is prone to. She said the test also explained why Dolly exhibits the typical “Pyrenees paw” — a common behaviour in the breed that sees them “holding hands” or lifting their paws as part of their communication.

Along with the mix of breeds, Dolly’s DNA results also suggested that she was related to another dog in the Embark registry — part of the company’s “relative finder” feature which Holly was initially unaware of.

“It was a 60 per cent DNA match, which underneath, they explain to you that it means they’re either siblings or parent and child,” said Holly. “He’s about a year and a bit old, that’s the exact time frame, [so we knew] that has to be one of her babies.”

Holly says she was overwhelmed with emotion and “could not compute what was happening” upon discovering that at least one of Dolly’s puppies was alive and well. She immediately reached out to the owner through the website’s messaging function.

The puppy, now more than two years old, is named Juice and is the biggest of the litter, weighing 120 pounds. Owner Adam Ellis says hearing from Holly was a “magical moment.”

“It was pretty awesome … it was this super explosion of emotion,” he said.

Holly and Adam pieced together that Dolly previously belonged to someone on a Winnipeg reserve who took her to a spay/neuter clinic after she gave birth and then failed to pick her up, which is how she came to be rescued and fostered out. Her puppies were picked up by Manitoba Underdogs, from where Adam adopted Juice.

“When we adopted Juice we were told the litter was abandoned; they were found underneath a porch. They were separated [from the mother] pretty young – like six weeks. So to find out that he wasn’t necessarily abandoned, it was just sort of an accident – that was a really sweet kind of moment.”

“Rescuing is obviously amazing, but sometimes it’s sad because you miss a big part of their life, ” added Holly. “My best guesses come from her behaviour and responses to things and so it felt amazing to be able to confirm some things about her before she had been in my life.”

Ryan explains that for a match to occur, both dog owners have to use the company’s DNA test and be registered in their system. So far they have heard several success stories.

“Over 90 per cent of our users find other dogs that are at least as related as cousins and about one in eight find a sibling or a parent or an offspring,” he said. “Many of our customers find these close relations and a lot of them meet up with each other.”

Ryan says they often hear that sibling dogs or parent/puppy pairs instantly recognize each other and it is obvious from their behaviour that they are connected.

Holly and Adam say they’re planning a reunion this summer so their dogs can experience that same feeling of reconnection.

Adam is also connected with the owners of Dolly’s other puppies through the Manitoba Underdogs Facebook page and all are within the Winnipeg area. He’s hoping they’ll be able to get the whole litter together to meet their mother and see how they all react.

“I think it’s going to be very emotional and very cute,” he said.