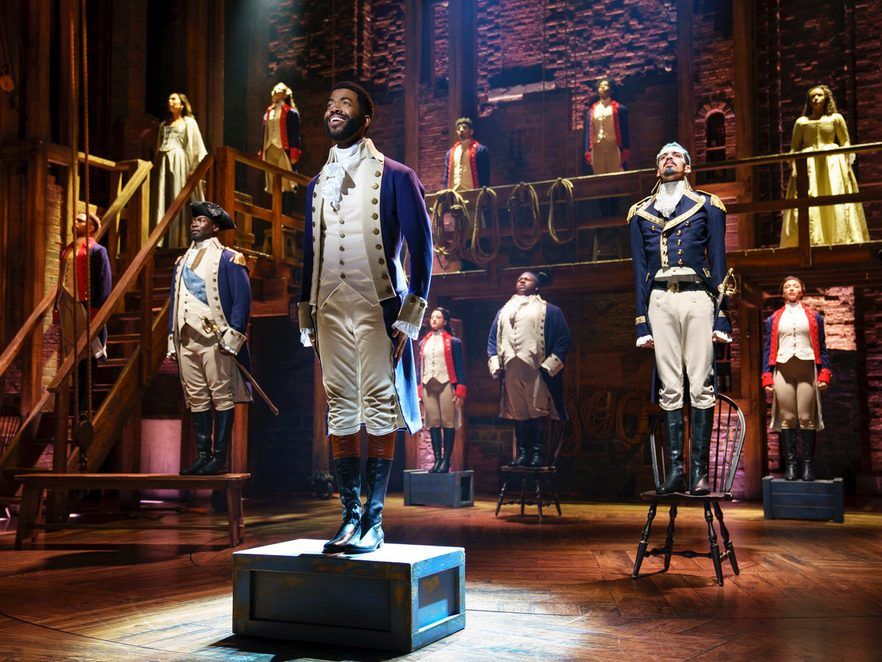 Lin-Manuel Miranda’s rap musical Hamilton deserves the hype and acclaim it has amassed since it first opened off-Broadway on Feb.17, 2015.

In just over seven years, it has become one of the most acclaimed, popular and successful musicals of all time.

It tells the story of Alexander Hamilton, one of the lesser-known Founding Fathers of America and of his roles in the American Revolution and in drafting the U.S. Constitution but it is much more than an exhilarating history lesson. Like its hero, it, too, is revolutionary for casting actors of colour as the historical characters and for telling the story through hip hop, rap, R&B, soul and even a few good old-fashioned Broadway-style songs.

It is Miranda’s answer to such earlier ground-breaking musicals as Jesus Christ Superstar, Evita and Les Miserables from which he borrows themes and styles. Those musicals were sung-through pop-rock operas while Hamilton is a rapped-through urban opera.

Because of Andy Blankenbuehler’s dazzling choreography, Hamilton is every bit as much a ballet as it is an opera. The stage is almost continuously awash with movement that is always earthy but often sensuous. This is one of Hamilton’s strongest points because, even if you’re unable to understand or catch all the rapid-fire delivery of the singers, you’re mesmerized by the frenzy of the dancers. Your eyes are always at full attention as much as your ears. Even the placing and removing of set pieces, furniture and props are highly stylized and integrated so beautifully into the movement on stage.

Thomas Kail’s directing is equally impressive. He uses the levels in David Korins’ massive set for maximum effect, having actors hover above the action and he knows when to pull an actor away from the dancers to highlight what that character is singing or to capture more perfectly an emotion. One of the most rewarding aspects of Kail’s direction is to watch the subtle interactions and tableaus at the back or side of the stage. They never distract from the main action but rather enhance it. There is always so much going on, it’s actually a relief when the stage is reserved for a quiet moment.

Paul Tazewell’s costumes have their eye-popping moments as during a battle scene with all those red British uniforms sparring off against the American blue and it only takes a jacket to transform an ensemble member from a dancer to a character. Howell Binkley’s lighting design for the tour is the finishing master touch for every scene. The Hamilton team dedicated the show to the theatrical lighting designer who died in 2020.

The cast for this touring production of Hamilton is exceptional. They are all triple-threat performers who dance, sing and act with equal aplomb.

Julius Thomas III takes Alexander Hamilton from an eager young college student to an ambitious revolutionary to an astute politician and, without the aid of makeup, he ages the man beautifully. His Hamilton is a flawed man whose betrayal of his wife becomes his private and political undoing.

Donald Webber Jr.’s Aaron Burr is to Hamilton as Inspector Javert is to Jean Valjean in Les Miserables. He is our hero’s nemesis and an unrelenting one as well yet Webber’s performance is so powerful he gains our empathy because he sees himself as a villain and regrets his lot in life, or at least in the musical.

Rick Negron is hilarious as the effete King George, the show’s comic relief and he really works his two Broadway-style show tunes.

Miranda has written great roles for his three female characters. Victoria Ann Scovens as Hamilton’s dutiful, loving wife, Milika Cheree as her sister Angelica who harbours a deep, unrequited affection for Hamilton, and Rebecca E. Covington as sister Peggy as well as Maria Reynolds with whom Hamilton has an affair, are all forces of nature whenever they take centre stage.

It’s the spectacle and pure theatricality of Hamilton that make it such a rewarding and exhilarating experience and explains why it has become such a phenomenon. It’s a pretty decent history lesson as well.

Hamilton runs at the Jubilee Auditorium until July 31.