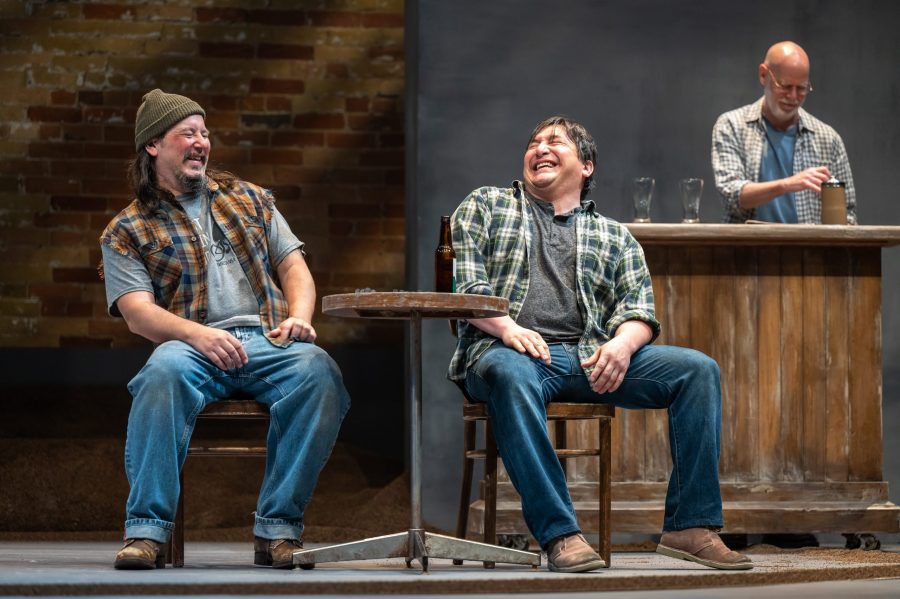 The next time someone compiles one of those click-baity lists of the best Canadian plays since such-and-such-a-year, I sure hope Kevin Loring’s Where The Blood Mixes is on it.

Although first performed in 2008 (it won the Governor General’s Award for Drama the following year), and given an excellent local staging in 2010, it’s got the weight, substance and emotional depth of something that’s been around much longer. Recent news stories about the graves found outside Canada’s residential schools make it feel even more urgent and worthy of study, discussion and reflection. As this powerful Soulpepper/Native Earth Performing Arts co-production demonstrates, it deserves to be a Canadian classic.

In the tiny town of Lytton, B.C., Floyd (Sheldon Elter) and Mooch (Craig Lauzon), both survivors of one such residential school, spend much of their time drinking in George’s (Oliver Dennis) bar. Lifelong friends, they bicker over who’s going to pay for a pitcher of beer (it’s obvious how Mooch got his nickname), play pull tab lottery tickets and discuss fishing. There’s a news story about how the government is going to be paying out settlements to residential school survivors, but an interview is required, and it’s clear neither man – Mooch was treated especially badly, it’s suggested – is eager to discuss the subject.

Floyd has something else on his mind. He’s recently received a letter from Christine (Tara Sky), the daughter he tried unsuccessfully raising by himself after his wife Annie died. The girl was taken away and adopted, but now she’s curious about meeting the father she barely remembers. All of which causes Floyd to immerse himself in guilt and relive the past, including the mystery surrounding Annie’s death.

There’s another character in the play who’s discussed in the first scene but who doesn’t show up until later: June (Valerie Planche), Mooch’s girlfriend, who physically abuses him for spending their grocery and bill money at the bar. Tellingly, Floyd teases Mooch for being hit by a woman, but when June finally appears at the bar, looking for him, it becomes clear that she, like the men, is dealing with the legacy of that horrific residential school system. June also has a connection with Floyd and Annie that has haunted her.

This remains Loring’s first and only play – he’s also a well-known actor, author and the first artistic director for Indigenous Theatre at the National Arts Centre. But it’s beautifully structured and open enough for a director to enhance it with her vision.

Jani Lauzon has done just that. Ken MacKenzie’s set suggests the various settings – bar, Floyd’s home, a fishing river. The use of a circular dirt path, which over the course of the play gets trampled upon, seems subtly symbolic. The set’s most prominent feature is dozens of pieces of paper that hang over the playing area, representing both Christine’s letters and, perhaps, missives from the past itself.

Equally powerful is Samay Arcentales Cajas’s video and projection designs, which help establish setting and create a living, breathing universe connecting the past and present.

Sound designer James Dallas Smith is continually onstage, sometimes as a physical character – another fisherman with Mooch and Floyd, for instance – but also as a musician. The way his sounds underscore a moment or allow us recover from something particularly painful is wondrous.

In my review of the 2010 production, I naively implied that Loring hadn’t dug deeply enough into his characters’ histories. What I didn’t account for was the layers of complexities committed actors can bring to their performances. Lauzon and Elter’s Mooch and Floyd have a rapport and shorthand that makes them believable lifelong friends. Their characters’ histories are etched in and on their bodies – in the way they hold themselves, slouch or sit in a chair.

I can’t think of two more soulful, heartbreaking and lived-in performances this season as theirs. Unless, of course, it’s Planche’s; she grounds the work with a much-needed solidity, and despite her character’s own ongoing struggles sees the healing and hope that might emerge from Christine’s visit.

An audience knows when it’s witnessing something special. And at my performance a few days into the run, there was complete, concentrated silence at the end, followed by a standing ovation. Unforgettable.