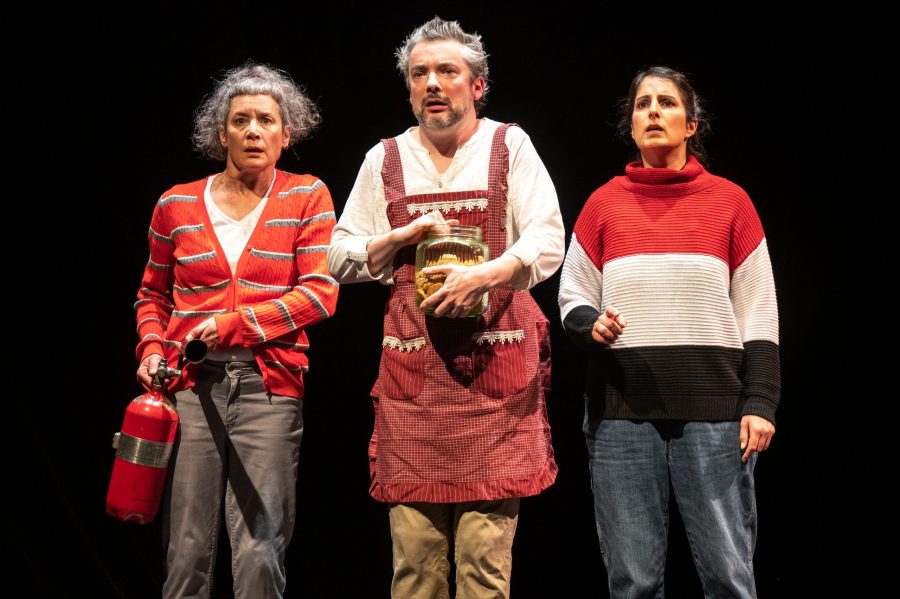 WILDFIRE by David Paquet, translated by Leanna Brodie (Factory Theatre). Runs to June 19 at the Factory Theatre (125 Bathurst). Pay what you can afford ($0-$60). factorytheatre.ca. Rating: NNNNN

The family unit is going up in flames. Last month we saw the Canadian premiere of Aleshea Harris’s Is God Is, a searing, epic drama about children seeking vengeance on the father who set his family on fire. Now comes David Paquet’s Wildfire, which feels like the comic inverse of that play; it’s a sizzling hot family tale that offers a quirky, forgiving and ultimately more hopeful look at humanity.

When the play opens we meet Claudette (Soo Garay), Claudine (Paul Dunn) and Claudia (Zorana Sadiq), orphaned triplets who live in different apartments in the same building and have a love-hate relationship with each other.

Each has her quirks and secrets. Claudette’s baby’s first words are, “I want to push you in the fire” (cue the first of many “Did we just hear that?” laughs from the audience). Claudine bakes terrible tasting cookies and communicates with them more than she does anyone from the outside world. Carol, the bitterest of the three, has borne a child and sent it away – in a box.

What ties the siblings together is the painful memory that their mother used to tell them she “should have had a fucking IUD.”

When their story is done – I won’t spoil what happens to them – we’re then introduced to Callum (Dunn) and Carol (Sadiq), two young misfits who meet each other and, despite their respective social awkwardnesses, find a rare connection. The third and final scene involves a woman named Caroline (Garay), who’s secretly turned on by serial killers and surrounds herself with figurines.

Paquet’s writing, exquisitely translated by Leanna Brodie, is alternately surreal and grounded. His people might be odd – one character keeps her child in a cage, another likes when her cat licks her feet – but they’re honest about their wants and needs. When they offer up lyrical observations about everyday things like cigarette butts or sipping sodas at the movies, they are fully, completely themselves.

Wildfire’s tone is one of its many strengths, and must be difficult to maintain; quirkiness can quickly become annoying or precious. But director Soheil Parsa offers up something that feels mythic yet gloriously ordinary.

The fact that there’s no specific setting allows him and his design team – particularly Kaitlin Hickey (set and lighting) and composer Thomas Ryder Payne (sound) – to create a timeless, open space.

The actors, clad in Jackie Chau’s character-revealing costumes, are superb. In the first scene, they create distinct siblings who seem understandably limited by their pasts. Watching Dunn and Sadiq’s Callum and Carol open up about their secrets and attempt to move beyond any lingering shame gives the play a feeling of hope. And Garay’s monologue is a sexy, seductive aria of loss and longing.

Don’t miss one of the season’s most pleasant surprises.