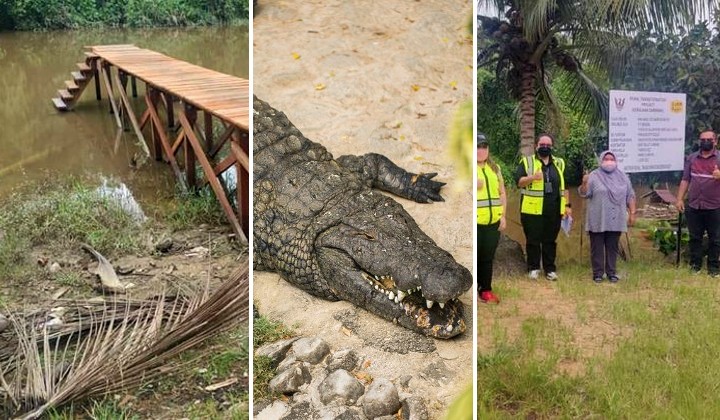 JKR Sarawak recently went viral after a simple wooden jetty project was revealed to have costed a whopping RM50,000.

Naturally, netizens were furious that such a plain and unassuming jetty fetched such as high price, paid by our taxes.

However, JKR Sarawak has released a statement defending the project and its costs in a press release sighted by TRP.

According to the statement, JKR Bahagian Miri went for a site visit to Kampung Mutap on 21 September 2021.

Originally, the ketua kampung had requested a 30m-long steel jetty including a timber shed (pondok). The chosen material of steel would have been more robust, but also more expensive.

However, the representative from JKR Bahagian Miri said that this was not possible for the budget of RM50,000. With this budget, only a 15m jetty made of belian timber with 2 staircases could be made. (Estimated costs of belian timber for this project is RM9,000 per meter cube, which is lower than the current market rate.)

If the chosen material was steel, then the jetty would have been even shorter than the 15m-length made of belian timber.

Various factors which contributed to additional expenses were taken into account as well.

JKR Bahagian Miri stated that the ketua kampung then agreed to a longer, less expensive jetty made of belian timber.

It turned out that one of the main reasons for the increased costs was because the river is infested with crocodiles, which meant that the appointed contractor had to take the necessary precautions.

Additionally, the road access to Kampung Mutap is difficult as there are no paved roads.

The project was completed in just 1 month

On 30 November 2021, Bukit Balat Company was awarded this project to complete. The contract commenced on 7 March 2022 and the scheduled completion date was 6 June 2022.

However, the jetty was completed much earlier than expected. The final site inspection on 6 April 2022 was jointly carried out by JKR Bahagian Miri, the ketua kampung of Kampung Mutap, and the contractor Bukit Balat Company.

The 15-m long jetty made of belian timber was then deemed satisfactory and completed.