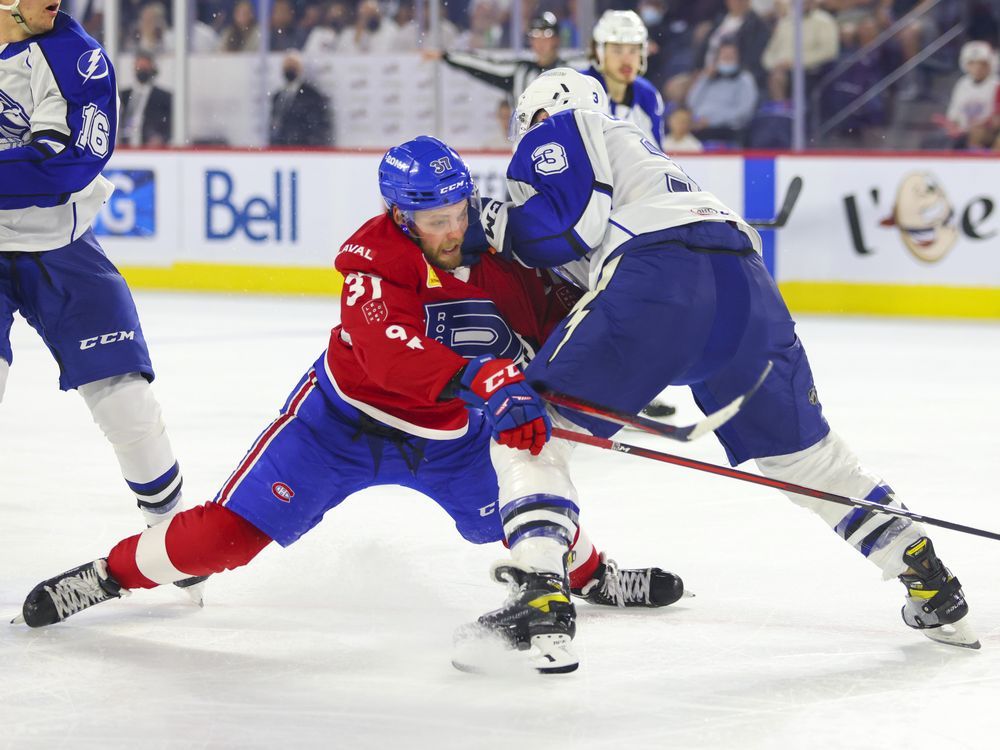 The Laval Rocket was back on the ice Thursday to prepare for the next round of the Calder Cup playoffs and coach Jean-François Houle said it didn’t matter which team the Rocket faces in the best-of-five North Division final.

“The important thing is to focus on what we do well,” Houle said as he awaited the outcome of Thursday’s deciding Game 5 between the Utica Comets and Rochester Americans. Rochester won 4-2, which means the best-of-five North Division final will begin Sunday in Laval.

“Rochester has a lot of talent and some good young people have come back from the Sabres.” Houle said. The Americans got goals from three of those players, Arttu Ruotsalainen, Mark Jankowski and defenceman Casey Fitzgerald, Thursday night.

The Rocket had to deal with a physical club in the North Division semifinal, working from behind to get past the Syracuse Crunch in a five-game series. The Rocket trailed 2-0 in the deciding game Tuesday in Syracuse, but tied it on Cédric Paquette’s goal with 38 seconds remaining in regulation before Gabriel Bourque potted the winner in overtime.

“The mood on the bench was that we’re going to come back, we’re going to score,” said Louie Belpedio. “That’s kind of been our M.O. all year. We’ve been down more than one goal and fought back to win. We have a lot of character and you see that in these playoffs.”

While this is the Rocket’s first playoff appearance, Houle said the team benefits from having experienced players.

“Guys like (Alex) Belzile and Paquette have gone far in the playoffs,” said Houle. “There is also (Xavier) Ouellet when he was with Grand Rapids. We were calm and, even when we were down 2-0, I felt that we would make a push and it ended well.”

The players enjoyed a day off Wednesday and Houle said he ran a relatively short practice to give his players a chance to recover.

Danick Martel, who set up Bourque on the winning goal, underwent treatment Thursday for an upper-body injury and Houle said he didn’t know whether Martel would be ready to start the next series.

Martel was rocked by a hard check from Pierre-Cédric Labrie in the first period of Thursday’s clincher. He was holding his right arm as he left the ice for treatment, but returned before the period was over.

“I knew he was in pain, but he told me he was able to play in certain situations,” said Houle. “We had chosen to go there with 11 attackers (for this match) so we did not want to go down to 10. We sent him out when he was feeling okay and he made the big play to set up Bourque. We are very happy with that.”

Houle dressed seven defencemen and 11 forwards from Game 2 on in the first round and said he might continue with that alignment.

“I like it because it gives our top forwards an opportunity for more ice time,” said Houle. “Then, in a physical match, we can share the work for our defenders and not overuse them.”