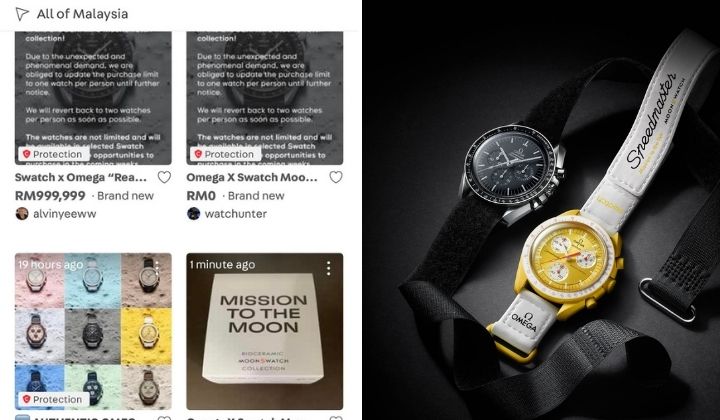 Subscribe to our Telegram channel for the latest stories and updates

Many Malaysians were willing to queue for hours outside Pavilion KL just to get their hands on the cheapest Omega x Swatch MoonSwatch line, worth RM1,065, yesterday (26 March).

What makes it more absurd is it’s not a limited edition watch and it will be available online soon.

Due to its popularity, it’s not a surprise to find scalpers reselling the same watch online at a higher price.

Zen The Geek shared a few screenshots of the watch listings online to lament about scalpers.

They suggested Omega and Swatch make as many of the watches as they could so people would not purchase the watch from scalpers.

A current search showed a list of MoonSwatch for sale on Carousell Malaysia, but there is no knowing if it’s a genuine or fake listing.

In addition, some users have taken matters into their own hands and made fake posts to prevent scalpers from making profits.

A search on Facebook Marketplace yielded about five sale posts for the MoonSwatch. Similar searches on Shopee, Lazada and Mudah did not yield results.

It’s the same across the straits

The MoonSwatch craze was the same in Singapore. A massive crowd waited outside ION Orchard and Marina Bay Sands to get their hands on the same watches on Saturday, 26 March.

They were also scalpers reselling the MoonSwatch in Carousell Singapore at a higher price. According to Mothership, some watches on Carousell were sold off within hours of the launch.

The MoonSwatch also drew a similar massive crowd in other countries such as Thailand, Japan, the United Kingdom, the Netherlands and Hong Kong.

The queue in Carnaby St. for the new Omega x Swatch Bioceramic Moonswatch. That’s hype for a quartz speedmaster watch. Impressive. Not getting one. #OmegaXSwatch #Speedmaster #London pic.twitter.com/CMhzrAaO3x

Total shit show at Swatch Amsterdam. 2k+ people but only selling to a list of 135🖕. #OmegaXSwatch #Amsterdam #Omega pic.twitter.com/BkxZmcuMfA