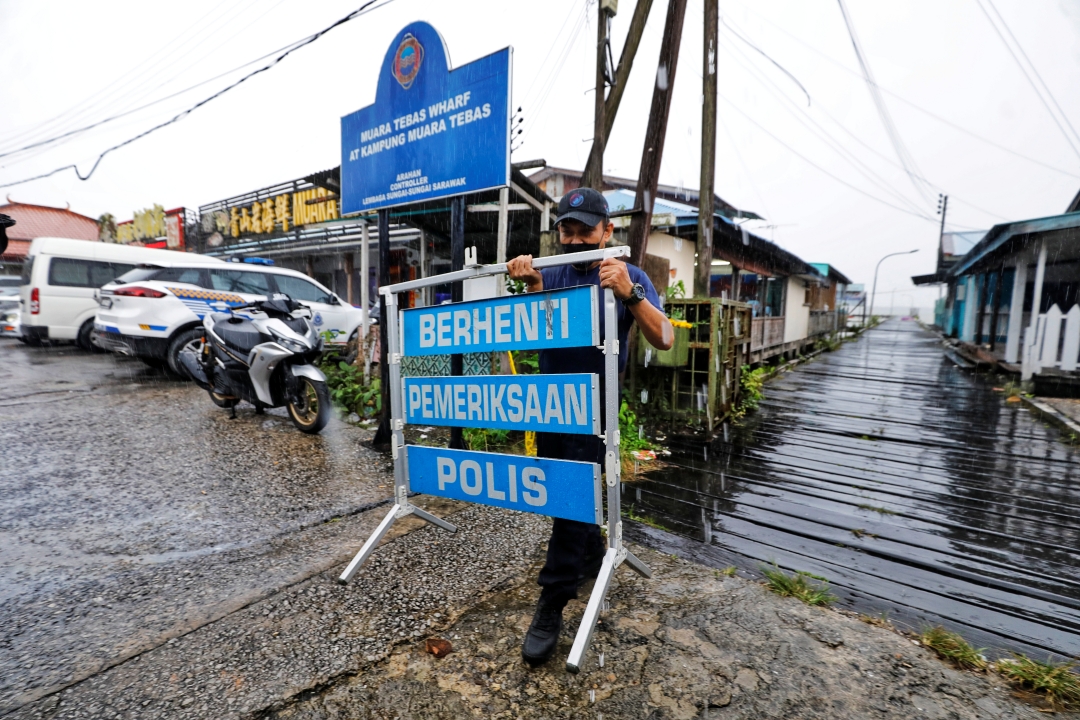 A policeman takes a police sign back to a police vehicle at the Muara Tebas Wharf.

KUCHING (March 19): The police have decided to call off the search for four-year-old Eric Chang Wei Jie after seven days of searching operation in Muara Tebas.

Kuching police chief ACP Ahsmon Bajah said despite taking alternative measures to overcome the hurdles during the operation, limitations caused by the weather, threats by wild animals, tidal conditions and structure of the land has constricted the search team’s efforts.

However, Ahsmon said, the investigation on the toddler’s whereabout is still ongoing.

“Although the search may have ended, the investigation will carry on through scientific methods to find any potential clues and leads in the case,” he said.

He urged members of the public who may have information on the case to come forward and assist the police.

Ahsmon also thanked all the other agencies involved in the search operation.

Bella the rescue dog with her handler.

The Fire and Rescue Department (Bomba) said in a statement earlier that the search operation today was carried out within a 200m radius around the village nearby after reports from locals of a rotten stench within the area.

Their scope of the search operation had also been extended by boat around the perimeter of Sungai Buda Besar, covering over 4.5km in distance.

Also taking part in the operation were the Bomba’s K9 Detection Unit and the police.

Chang was reported missing by his mother on March 7 at the Bintawa police station at 7.42pm after he was missing since 9am on that day.

Subsequently, the police detained Chang’s parents, and his caretaker and her husband to facilitate the investigation.

Police had classified the case under Section 31(1) of the Child Act 2001 for ill-treatment, neglect, abandonment, or exposure of children.

Last Sunday, however, Ahsmon said that the case was reclassified under Section 302 of the Penal Code for murder, adding that the caretaker and her husband would be remanded further to assist in the investigations.

The search for Chang started after the caretaker purportedly confessed to police that she knew what had happened to the toddler.

The caregiver and her husband have been remanded until March 24. Chang’s parents, meanwhile, have been released on police bail.