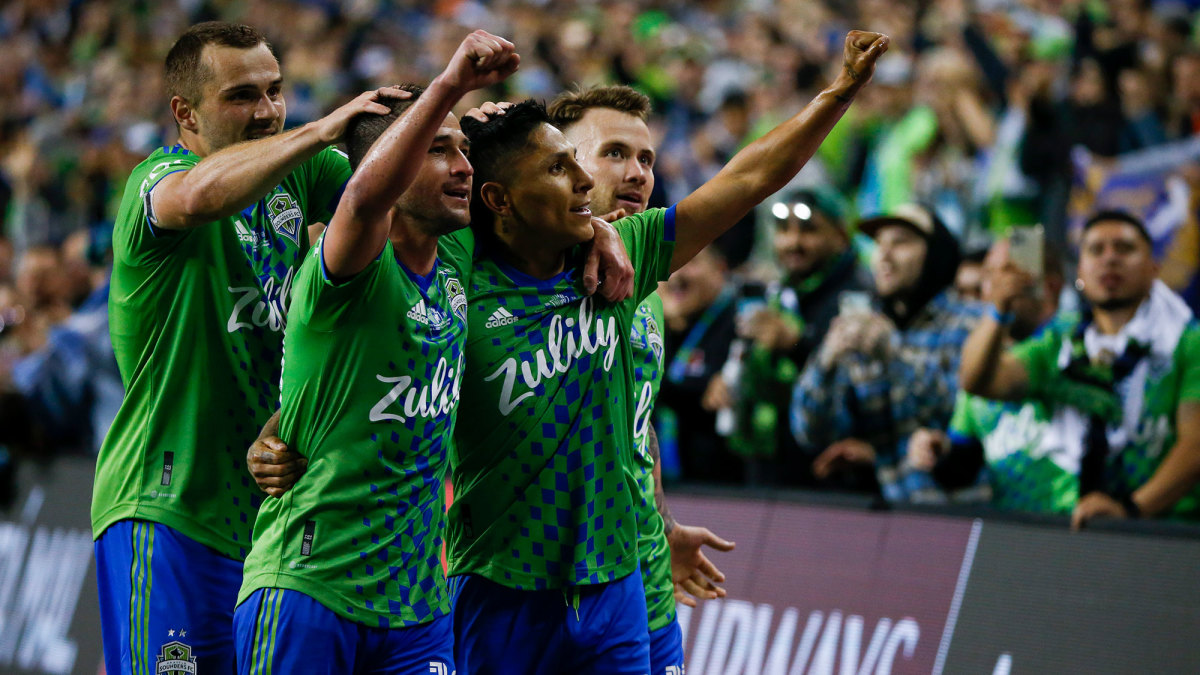 The Seattle Sounders have cleared the final hurdle that has traditionally been a problem for MLS teams.

Seattle defeated Pumas UNAM, 3–0, Wednesday night in front of a record crowd at Lumen Field to become MLS’s first Concacaf Champions League winner. After securing a 2–2 first-leg draw in Mexico City last week thanks to two Nicolás Lodeiro penalty kicks, the Sounders returned home knowing that a win of any kind in the second leg would be enough to claim the title. No MLS club had won the title in the CCL era (Real Salt Lake, Montreal Impact, Toronto FC and LAFC had reached the final and lost) and Mexican clubs had won every Concacaf title dating back to 2006 prior to Seattle’s 5–2 aggregate triumph. D.C. United (1998) and the LA Galaxy (2000) were the only MLS teams to previously claim a Concacaf title of any kind, but the league has never sent a participant to the FIFA Club World Cup, which is the prize that comes along with the trophy for Seattle.

Away goals did not apply in the final, meaning that aside from leveling the aggregate score, Lodeiro’s first-leg goals didn’t have any additional value. For Seattle, it was a matter of showing out in front of a CCL-record crowd of 68,741, overcoming a pair of early injuries and finding a way to silence Juan Ignacio Dinenno, who led all CCL scorers with nine goals—two of which came in the first leg of the final.

The scene in Seattle to start the match was as energized as anticipated, with the Sounders supporters unfurling a tifo that read “Kings of Cascadia. Rulers of MLS. Next: Concacaf.” That proved prophetic.

In terms of the match itself, Pumas didn’t seem all too bothered by the setting, settling into possession in the fourth minute after a couple of earlier forays forward fell apart in the final third.

Seattle’s first moment of potential danger came in the seventh minute, when Nouhou was fouled by the left sideline. Lodeiro’s free kick didn’t cause too much trouble, though, and was cleared with ease. In a chase for the loose ball, João Paulo went to ground and was first to it, only to be on the receiving end of a sliding challenge from Leonel López, as the physical, chippy nature of the match continued to unfold.

Seattle knocked on the door a bit at the quarter-hour mark, with a blocked shot and on-target header forcing goalkeeper Alfredo Talavera into action, though neither moment was particularly threatening for the 39-year-old veteran.

Raúl Ruidíaz forced Talavera into another save a few minutes later after he chased down a ball down the left channel, cut to his right and whipped in a shot from just inside the Pumas box.

The Sounders lost another key player in the 27th minute, after João Paulo went down amid pressure from López at the right sideline. It looked like a non-contact injury that caused the Brazilian midfielder to go down in a heap, though, and he was stretchered off and carried straight to the locker room. Obed Vargas, 16, came on in his place as Seattle’s second change.

Pumas nearly pounced with the hosts a bit shellshocked by the early misfortune, but Washington Corozo couldn’t quite keep down his chance from the center of the box after being played into a dangerous position by Favio Álvarez.

Seattle, to its credit, bounced back and remained full of intent on the ball. In the 42nd minute, Cristian Roldan fired in a cross from the right toward Lodeiro, who met it with his late dart through the midfield but pushed his first-time chance wide of Talavera’s post.

Seattle broke through just before halftime. Albert Rusnák created the danger, dribbling through defenders before sending in a dangerous cross. Xavier Arreaga laid it off for Ruidíaz, whose blast took a wicked deflection past Talavera and in for the opener that gave the hosts a 1–0 lead on the night, 3–2 on aggregate.

The second half began with much cohesion on either side, though Pumas earned a pair of free kicks in the opening 15 minutes. The first, taken by López, didn’t get beyond the Seattle wall, while the second, taken by Dinenno, screamed just over the upper left-hand corner of the goal, not missing the frame by much.

Stefan Frei was called into action in the 65th minute for his first save of the night, and it was a big one. Brazilian forward Diogo snapped down a header off a cross into the box from Corozo, but Frei was equal to it, adding to his legend for Seattle with another major save in a final to keep the hosts on top.

With Pumas committing numbers forward, Seattle had the opportunity to pick its spot on the counter, and the moment it was seeking came in the 81st minute. With Jordan Morris streaking down the right, he crossed for Lodeiro, who delivered a sublime touch to find Ruidíaz for his second goal of the night and one that gave the Sounders some breathing room at 2–0 in the game, 4–2 on aggregate.

The Sounders iced the result even further in the 88th minute, when Morris whipped in a shot off the post. Lodeiro was in the right spot to fire in off the rebound, making it 3–0 on the night, 5–2 on aggregate and sending the crowd at Lumen Field into hysterics and putting the finishing touches on a historic trophy run.